The Natural Resources Council of Maine released a statement from Sustainable Maine Director Sarah Nichols in response to DEP’s delays, saying in part, “We do not believe this delay is necessary or based on the best available science. We would encourage businesses to implement these measures to reduce plastic pollution as called for in Maine law because it is the right thing to do for our environment..." Read the full statement. 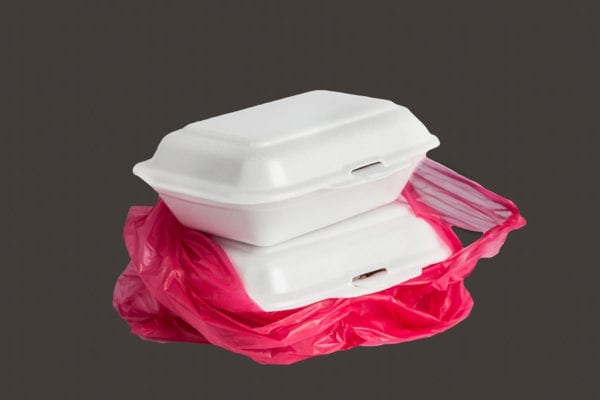 In 2019, Maine Governor Janet Mills and the Legislature passed two significant bills into law that target two top sources of plastic pollution: expanded polystyrene (EPS) foam food ware and single-use plastic bags. There have been a lot of questions about how the new laws will be implemented, so to help Maine residents, towns, and businesses better understand what it means to them, our Sustainable ME team created this handy summary:

*Please note that the effective date of Maine’s ban on single-use plastic bags has been delayed until January 15, 2021, as part of a package of measures to respond to COVID-19.

What is Plastic Pollution?

Plastic pollution is a more devastating problem than you may think. Plastic is present throughout the environment everywhere on earth. Maine is no exception. Plastic is polluting our waterways, coastlines, forests, and open spaces, choking wildlife, and making its way into the food web. The sources of this pollution are unnervingly diverse, and the flow of plastic into the environment is showing no signs of slowing down. In fact, it is increasing. The amount of plastic litter we can see is astounding, but even more worrisome is the staggering amount of plastic pollution we cannot see—so-called microplastic. A growing body of evidence is revealing plastic pollution’s devastating impact on our health and  the environment.

We have created 8.3 billion metric tons of plastic since 1950 (imagine the weight of 45.3 million 747 airplanes)–strikingly, roughly half of that was created in the last 13 years. Despite well intentioned recovery efforts around the world, only 9% is recycled. Some 12% is destroyed through incineration, and 79% is either in our landfills or polluting our natural environment. The weight of all plastic currently on earth already is 29 times as much as all humans put together. If we continue on this disturbing trend then there will be 12 billion metric tons of plastic in our landfills and natural environment by 2050—and plastic will outweigh fish in the ocean.

How Can You Help Reduce Plastic Pollution in Maine?

NRCM is working hard to bring plastic pollution solutions to Maine. Together, we can reduce Maine’s impact on this catastrophic global problem and provide inspiration for others around the world.

We need to change the way we use plastics. Nothing we use for fleeting moments (like carrying groceries to the car) should be made of a material that lasts forever. There are several ways to approach these changes.

Top 10 actions that you can take every day to change your relationship with plastic:

And, as with all of our work, you can stay informed with NRCM. Join NRCM’s online Action Network and we'll alert you when you will have the chance to let your voice be heard.

How Does Plastic Pollution Get into the Environment?

When plastic enters the water, it is carried all over the world by streams, rivers, and ocean currents. The United Nations Joint Group of Experts on the Scientific Aspects of Marine Pollution estimates that land-based sources account for up to 80% of the world's marine pollution and that anywhere from 60% to 95% of ocean debris is made of plastic. The sources of land-based plastic pollution are extremely diverse—but the majority enters as large pieces of plastic trash such as bottles and caps, bags, containers, and packaging. And the smaller pieces, called micro plastics, come from many sources including synthetic textiles, personal care products, and vehicle tire dust.

Plastic never goes away, even biodegradable plastic. Rather, it breaks down into smaller and smaller pieces through exposure to the elements. It’s the smaller pieces and micro plastics that may pose the most risk to wildlife as they are easily mistaken for food by fish and birds. Researchers in Australia estimate that nearly all seabirds have eaten plastic at some point.

And if you think this is only an oceanic problem, think again. It’s estimated that 83% of tap water samples from around the world contain plastic particles. The US had the highest concentration rate at 94 percent. A micro plastic study of the Great Lakes tributaries by United States Geological Survey and State University of New York, Fredonia identified that the majority (71%) of micro plastics there were plastic fibers from sources like synthetic clothing and cigarette butts.

Plastic Pollution and Your Health

You may be wondering what plastic pollution means for your health. The short answer is that we still do not yet know the full extent, but what we do know is very bad. For starters, chemicals used to make plastics hard (bisphenol-A or BPA) or bendable (phthalates) are found in the micro plastics that humans and other living creatures are ingesting. BPA and phthalates have been shown to lead to reproductive and neurological disorders, and pose the most risk to developing children.

So, 80% of the plastic we’ve ever created still exists. The production of plastic and resulting plastic pollution is speeding up. Humans and wildlife are ingesting toxic plastic. We must act. But how?

Here are more ways you can join NRCM in the fight against plastic pollution: