Restoring the Kennebec River above Waterville

Mainers have played a vital role in bringing life back to our rivers because clean water is so central to Maine’s economy and way of life. Removing four obsolete dams on the Kennebec River is an urgent next step that will improve the health of the Gulf of Maine, enhance riverfront communities, and bring back millions of sea-run fish, including endangered Atlantic salmon.

The Kennebec was once the most productive river in Maine1, supporting Atlantic salmon runs in the hundreds of thousands2, and runs of shad and river herring in the many millions. Today, the future of the Kennebec River is at a critical point. Atlantic salmon are on the brink of extinction, and their survival depends on further restoration of the Kennebec more than any other river in the United States.

Four dams above Waterville, owned by the international energy giant Brookfield Renewable Partners, stand in the way of a free and healthy Kennebec, blocking access to many miles of historic spawning and rearing habitat.

Federal and state agencies have identified these dams as the key impediment to restoring the Kennebec and have called for significant action: the removal of the Shawmut Dam and potentially others in order to save endangered Atlantic salmon and other sea-run fish.

Perspective: "The Kennebec River belongs to all Mainers, not just Brookfield," by Sean McCormick

Perspective: “Our Rivers Should Be Alive and Productive. Brookfield is Not Helping,” by Richard Lawrence

News release: “Mainers Call for Removal of Dams to Restore a Healthy Kennebec and Save Salmon”

Blog: “Fatal Flaws in Brookfield’s Proposal for the Kennebec”

Perspective: “Restoring the Kennebec, the Nucleus of Wabanaki Life,” by Mali Obomsawin

Perspective: “Enough of ‘pickerel vs. payroll’ on Kennebec,” by Willie Grenier

In Maine, we know from experience that when we remove dams, native fish and wildlife return in record numbers, injecting new life into rivers that helps revive riverfront communities and supports commercial and recreational fisheries.

Dam removals on the Penobscot River in the mid-2000s have boosted fishing3 and paddling.4

After the removal of the Edwards Dam in 1999 and the Fort Halifax Dam on the Sebasticook River in 2008, the lower Kennebec River has surged back to life:

Four Dams Stand in the Way of Salmon Recovery

The Sandy River and its tributaries in interior Maine provide some of the best spawning and rearing habitat for Atlantic salmon and other sea-run fish, but these fish cannot reach it because Brookfield’s four dams above Waterville block their passage.

Brookfield’s Four Dams (see & zoom in on map below)

In 1998, the Kennebec Coalition7 signed a legal agreement with the owners of these dams that was supposed to result in rapid restoration of fish species in the Kennebec. Twenty-two years later, sea-run fish still cannot swim above the Lockwood Dam because Brookfield and previous dam owners have utterly failed to live up to their responsibilities.

State and Federal Agencies Call for Dam Removal on Kennebec

Recent filings by state and federal agencies show that the tide is turning against Brookfield and in favor of native fish and a rejuvenated river above Waterville:

Read what state and federal agencies had to say about dam removal in their own words:

“The Shawmut project represents less than 0.1% of the production of electricity in the State of Maine yet, if relicensed with underperforming fishways, would hasten the extinction of an iconic Maine species, Atlantic salmon, and could result in millions of sea-run fish not reaching historic habitats over the term of the license…MDMR believes the Shawmut project is particularly suited for decommissioning and removal."9  (emphasis added) – DMR

“Significant spawning, rearing, and migratory habitat exists above the Shawmut Project. Existing dams prevent access to those historical habitats. Atlantic salmon were virtually extirpated from their historical range within the Kennebec River watershed. Accordingly, a decision to decommission and remove the Shawmut Project and thereby remove a significant barrier to recovering an endangered species, and support the restoration of several anadromous fish, would fulfill the Commission’s mandate under the FPA to ensure the best comprehensive use of a waterway."10 (emphasis added) — NMFS

The four dams above Waterville generate an insignificant amount of hydroelectric power, and the damage they do to the Kennebec’s ecosystem far outweighs their limited benefits.

The dams represent only 6%11 of Maine’s overall hydroelectric capacity and are increasingly unnecessary as the state accelerates the transition to solar and wind energy to combat climate change. For example, the growth in solar energy generation is expected to dwarf the capacity provided by the four dams by about five to one in the next five years.12

Healthy sea-run fish populations are critical to the Maine lobster industry, to the countless birds and wildlife that prey on them, and to any hope of restoring coastal ground fish (such as halibut and cod) populations in the Gulf of Maine.

When fish are once again able to reach their historic spawning grounds above Waterville, a lively and rejuvenated river will inject new energy and life into the region that will benefit Mainers for generations to come. 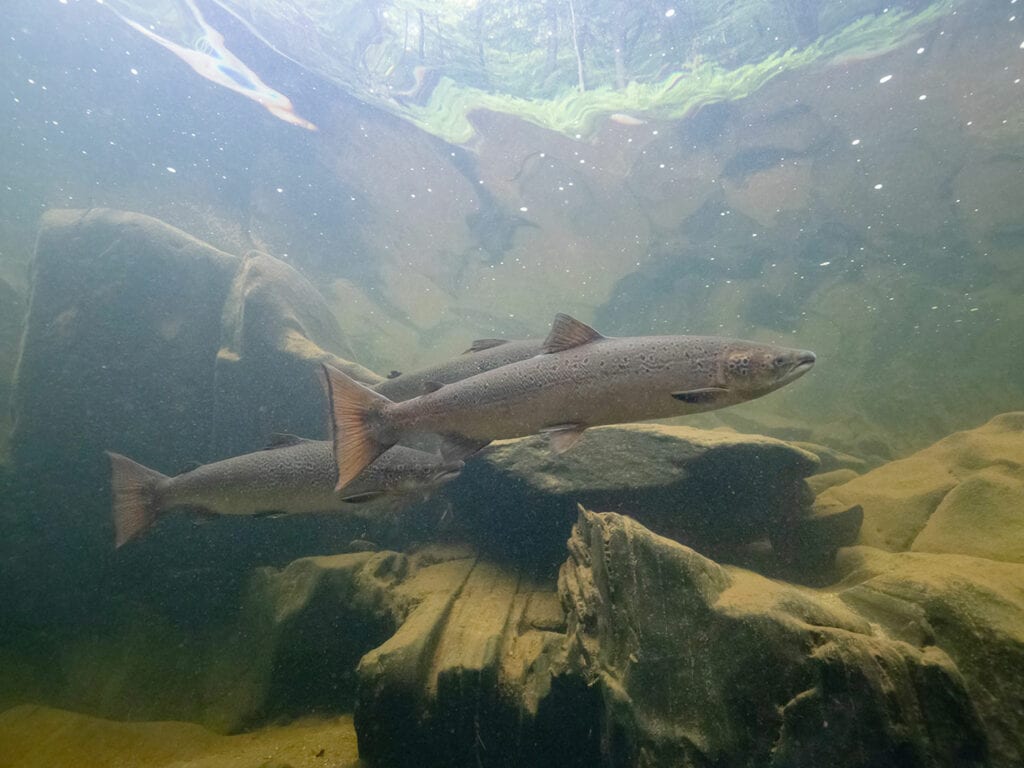 An adult Atlantic salmon in the Sandy River. Photo by Atlantic Salmon Federation

7 The Kennebec Coalition consists of the Atlantic Salmon Federation, Maine Rivers, the Natural Resources Council of Maine, and Trout Unlimited and its Kennebec Valley chapter. All of the groups except Maine Rivers are signatories to the 1998 agreement.

12 Maine’s solar generation capacity is expected to grow by an additional 1,128 MW over the next 5 years according to the Solar Energy Industries Association. Accessed at https://www.seia.org/state-solar-policy/maine-solar

Banner photo: Looking upstream on the Kennebec RIver, from above the Shawmut Dam in Fairfield, Maine. Photo by J.Monkman/NRCM