Cars and Trucks and Climate Change

Many people are surprised to learn that cars and trucks are the single largest source of climate-changing air pollution in Maine, roughly 54 percent. This air pollution that exacerbates climate change isn’t just threatening our natural resource-based economy here in Maine, it’s also impacting our air quality and the health of Maine families and children. By driving electric vehicles in Maine, people are reducing air pollution that harms our environment, our health, and our economy.

Fortunately, high-efficiency, gasoline-battery hybrid cars like the Prius are now commonplace and many models of “plug-in” cars, also known as electric vehicles (EVs), are now practical and available in Maine. In fact, they’re taking off. Twice as many people drive electric cars in Maine in 2018 than in 2014—it’s over 1300 people! While some vehicles operate entirely on a charge, others are plug-in hybrids that operate on electricity for part of the drive and then kick in with gasoline when needed.

Given Maine’s sources of electricity, electric vehicles here are a very low-emission alternative to our biggest source of pollution, and that only improves as we continue to increase renewable power on the grid.

Right now, 12 states in the Northeast and Mid-Atlantic are developing a regional Transportation & Climate Initiative (TCI) that could help create more affordable and healthier transportation options for Mainers and lead to less pollution from cars and trucks.

This is great news for Maine. As a rural state where getting where you need to be can be difficult, expensive, and frustrating, TCI would give our communities the funds to invest in solutions that reduce pollution, expand public transportation opportunities, increase electric vehicle charging, and make our communities safer for walking and biking.

Electric vehicles are fun to drive and cheaper to fuel. The cars are not just good for the people driving them though. More Mainers driving electric cars benefits everybody else in Maine, too. They are better for Maine’s environment, economy, and energy independence than gas-powered cars. 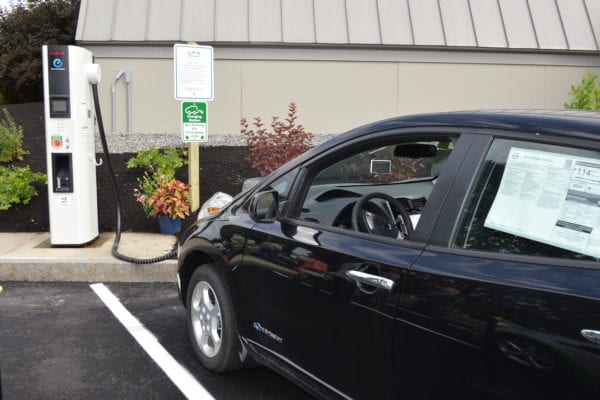 NRCM’s 2018 survey of electric car owners in the state of Maine found that most respondents opt to buy these cars due to the reduced air pollution and wanting to address climate change and also to achieve gas savings. However, after they had the cars, what they liked most about driving them was the superior driving experience.

As gasoline-electric hybrids become increasingly common, a new era of “plug-in” electric cars is shaping the future of transportation everywhere, from Maine and New England to Europe to China. These cars on the roads and available at dealerships across the state, and they’re a smart choice for many Mainers.

Our 2018 survey found that 96% of people found their electric car to be reliable; 89% said it was easy and affordable to maintain (only 2% said it wasn’t) and 92% would recommend electric cars to their friends, family, and colleagues.

Some people are surprised that electric cars are a choice that makes sense financially and environmentally.

One of the top reasons Maine electric car owners identify as their reason to buy their electric vehicles is saving money on gas. And it’s paying off!

Additionally, many plug-in electric vehicles are now comparable in price to conventional cars, especially when you factor in the federal tax credit (anywhere between $2500 and $7500). People are also now finding used electric cars that are even more affordable.

After spending years with gas-powered cars, many folks are concerned about how far they can go in an electric vehicle, but battery ranges are increasing and charging stations for electric cars are expanding rapidly around the state, the region, and the country. In truth, most people simply charge at home overnight and leave each day with a full “tank” and enough miles to do what they need to do.

For people who have solar, or are considering getting an array installed, once you’ve paid for the panels, it’s like having free, clean fuel for your car. Check out some of our resources below for more information on electric cars, charging them, and the exciting future of transportation.

Electric car drivers are overwhelmingly charging their vehicles overnight at home. In fact, 87% of 2018 survey respondents indicated that home was their primary charging place. Mainers are using public charging stations now more than ever before though and while the numbers and locations of car chargers is expanding, there is a need to continue growing this number.

Maine is also a recipient of millions of dollars from the Volkswagen settlement fund after their cars were found to be cheating on air pollution tests. This money is being administrated through Efficiency Maine and being used to install electric vehicle chargers around the state and soon will be used to provide rebates for electric cars.

The Natural Resources Council of Maine works for laws, programs, and public information that help transition to a cleaner transportation system, especially through electrification.

For the health of Maine people and our environment, NRCM continues to lead efforts to make cleaner, more fuel-efficient vehicles available. Cleaner cars mean cleaner air, and that means a healthier future for all of us.