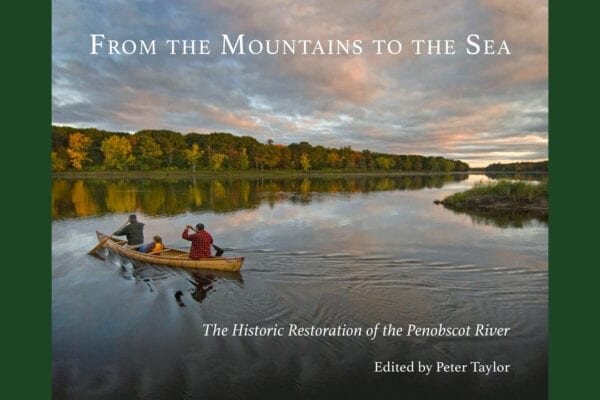 The book, From the Mountains to the Sea, tells the stories of people involved in this 16-year river restoration project. Order your copy from Islandport Press.

Watch Penobscot Webinar NRCM and our partners hosted a webinar about the Penobscot project, which you can watch below. Hear from John Banks of the Penobscot Indian Nation; Laura Rose Day, the executive director of the Penobscot River Restoration Trust; Kate Dempsey of The Nature Conservancy; Andy Goode of the Atlantic Salmon Federation; and NRCM's advocacy director Pete Didisheim.

New England's second largest river system, the Penobscot drains an area of 8,570 square miles. Its West Branch rises near Penobscot Lake on the Maine/Quebec border; the East Branch at East Branch Pond near the headwaters of the Allagash River. The main stem empties into Penobscot Bay near the town of Bucksport.

The river is tidal from the base of the former Veazie Dam to its mouth near Bucksport (approx. 25 miles) and is brackish to the town of Hampden. The river's total fall from Penobscot Lake on the South Branch is 1,602 feet.

The Penobscot River Restoration Project was a collaborative effort to balance fisheries restoration and hydropower production in Maine’s largest watershed. NRCM is a proud founding member of this effort and, working with others, was been instrumental in its success. View a full timeline of the Penobscot Project at the bottom of this page.

The Trust completed the project in 2016, and it has vastly improved access for Atlantic salmon and other sea-run fish to nearly 2,000 miles of their historic river and stream habitat.

The Trust removed the Great Works Dam in 2012 and the Veazie Dam in 2013 to open up the lower Penobscot.

The Trust also completed a stream-like bypass channel around the Howland Dam in 2016.

Scientists are documenting the benefits of the project, and some Trust partners are improving fish passage on tributaries upstream from the project area.

The Penobscot and its tributaries flow from Mount Katahdin through the heart of Maine to Penobscot Bay. It is the largest river system in Maine—draining more than one-quarter of the state—and the second largest in New England. The river connects the mountains to the sea, delivering ecological benefits and opportunities for recreation, economic development, and cultural enrichment. The Penobscot Project benefits the watershed by:

Native sea-run fish—such as river herring and shad—have already rebounded. These fish provide food for many fish-eating birds and mammals, including eagles, porpoises, and river otters. Over time, the increase in sea-run fish populations will help to restore commercial coastal ground fisheries as well.

Signs of Renewal are Already Evident

Sea-run fish are heading into newly accessible habitat. Almost no shad used the fishway at the former Veazie Dam, but in 2017, nearly 4,000 shad used the new fish lift at the Milford Dam, now the first on the river. Anglers now catch shad in places that were inaccessible to this excellent game fish for a century. Nearly 1.2 million river herring used the Milford fish lift in 2017, up from essentially zero river herring passing upstream of this area just three years ago. Sturgeon are also reaching their historic spawning grounds and even entering the Milford fish lift! The Penobscot Nation has hosted three national whitewater canoe races on the newly free-flowing river above Old Town.

Dam owners increased hydropower generation at six dams in and near the Penobscot. This allowed energy generation to remain consistent with previous levels despite the removal of two dams and the decommissioning of a third.

Timeline of the Penobscot Project

The Penobscot Project happened incrementally over several years, and involved restoring the river through three major construction projects, changes in energy operations and re-licensing requirements, a variety of permit obligations, outreach to communities within the project area and to the public at large, planning for economic and community development activities related to the river's restoration, and significant private and public fundraising.

The final investment of the project came to $63 million, raised from private sources and federal government programs to support project implementation, including dam removal and modifications, complying with permit requirements, and engaging in economic development projects.

June 25, 2004: The Lower Penobscot River Settlement Accord, the multi-party agreement laying the framework for the project, was signed. Once energy enhancements were approved, PPL Corporation began implementing them, and addressed impacts of energy operations on Penobscot Indian Nation tribal lands.

Late 2007: The Penobscot Trust reached a fundraising goal of $25 million needed to purchase the Veazie, Great Works, and Howland Dams.

June 20, 2008: Exercised the option to move forward on dam purchases

December 17, 2010: After receiving necessary federal and state permits, and undergoing all necessary legal due diligence, the Penobscot Trust purchased the Veazie, Howland, and Great Works Dams.

NRCM was a founding member of the Penobscot River Restoration Trust, and this is one more example of our commitment to protecting and restoring Maine’s environment, now and for future generations.