Thanks largely to the Clean Water Act, Maine’s great rivers are much cleaner than they were 40 years ago, but we still have a long way to go to restore many of them. NRCM continues to make clean water a high priority.

The Kennebec, the Penobscot, and other Maine rivers are cleaner today than they were 40 years ago, thanks to the Clean Water Act of 1972, which forced polluting industries and towns to treat waste and sewage before discharging it. The primary author of this law, Maine’s U.S. Senator Edmund Muskie, acted in response to the extreme pollution he saw growing up along the Androscoggin River in Rumford, Maine.

NRCM is committed to advancing Senator Muskie’s vision for clean water in Maine. In 2005, we supported a bill to protect small streams from polluted runoff that harms fish and other aquatic life. In 2004, we worked with Maine lobstermen to stop municipal sewage treatment plants from rolling back standards that protect clean water in Maine’s estuaries and marine waters. Because lobsters thrive in clean, well-oxygenated water, Maine’s lobster industry was very worried about this threat. Together we defeated the efforts that would have allowed more pollution from sewage treatment plants and industries all along our coast.

Over the years, NRCM has helped increase protection for hundreds of miles of Maine rivers and streams by lobbying the Legislature to upgrade their water quality classifications. These upgrades help limit the amount of pollution allowed in these rivers—a major victory for water quality, fish and wildlife. In 2019, the Maine Legislature passed two important water quality bills: one to increase protections of more than 400 miles of rivers and streams and one that protected sustenance fishing rights for Maine's four Indian tribes. The new sustenance fishing criteria will be the most protective in the nation.

Despite our successes, pollution continues to threaten people and wildlife in Maine. Since 1995, the Maine Bureau of Health warns people to limit eating fish from all of Maine’s inland waters due to mercury contamination. It also tells people to further limit eating fish from many of Maine’s rivers, eat no lobster tomalley, and severely limit consumption of bluefish and striped bass, two of Maine’s most popular saltwater sport fish. This is due to a combination of mercury, PCB, and dioxin contamination.

NRCM’s staff scientist, Nick Bennett, is a member of Maine’s Surface Water Ambient Toxics Technical Advisory Group (SWAT). This group advises state government where and how to sample for toxic chemicals in Maine waters in order to understand more about the threats these chemicals may present to people and wildlife. NRCM also fights against the almost constant attempts to weaken the laws and regulations that protect our waters from pollution.

We continue this work on behalf of the people and wildlife of Maine. We encourage you to join our efforts! 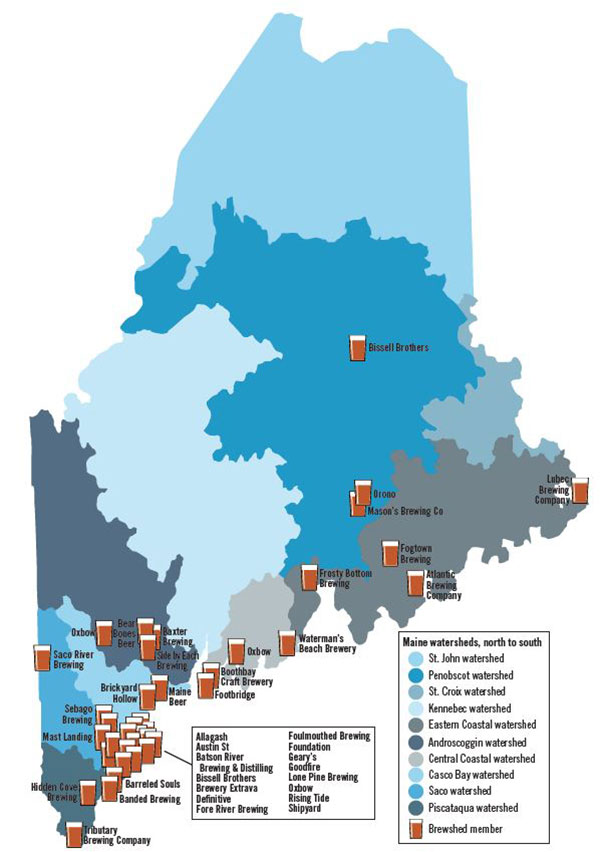 The Maine Brewshed® Alliance is a coalition of brewers and the Natural Resources Council of Maine committed to protecting the waterways that make our state a great place to live, work, brew, and enjoy great beer. View a map of participating breweries.