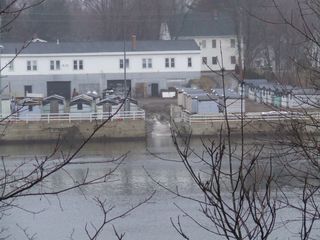 Last winter, I wrote a blog post, Joys of a Maine winter, sharing my love for winter fishing in Maine. But this winter has been disappointing. With the warm December and January, and early spring (summer, really) temperatures, the ice fishing season was much abbreviated. I got out on the ice maybe only five times this year. And smelting was even worse—just got out twice and very little luck (do three smelts even count?!).

Concerns about thin ice conditions would typically send me into the woods for some skiing or snowshoeing, but with less than half the normal snowfall this year, I managed to go downhill skiing twice and cross-country once. And even those few days were pushing the snow conditions—which were sticky and icy. 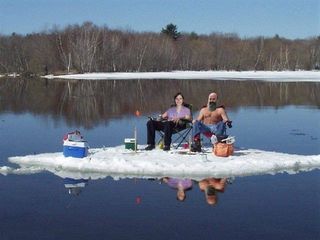 I usually look forward to winter sports in Maine—a nice sunny day out fishing on the ice with my dad or snowshoeing or skiing on a quiet  trail. But this winter was rushed and left me feeling disappointed. To make it worse, when I finally got used to the fact that we were going to have a mild winter and gave in to the 80-degree March days with a bike ride alongside the flowing Kennebec—it has gotten cold again. What is going on?

Now, I am worried for all the song birds that have come back early, triggered by the out-of-sync environmental cues, and all the plants that are already blooming. For avid birders, like my colleague Allison Wells, these concerns are visceral. Check out Allison’s blog post about her concerns with the “Sudden Spring” and the impacts on birds. With open-water fishing just around the corner, I wonder if there will be enough snow pack to keep the waters in the rivers and streams cold enough for Maine’s precious brook trout and salmon populations.

And I am not alone with these worries or frustrations. This week, NRCM released a new report out from the National Wildlife Federation, which says that this winter may just be a preview of what’s to come in a warming world. The report, On Thin Ice: Warming Winters Put America’s Hunting and Fishing Heritage at Risk, tells the stories of how 2011-2012’s warm winter impacted hunters and anglers across America.

This kind of oddball winter weather is exactly what climate scientists say we can expect in a warming world. This is why it is more important than ever to stand up for clean air and a healthy climate, now.

The more we cut down carbon pollution coming out of smokestacks, the better chance we have of being able to enjoy our fine Maine winters as well as our beautiful Maine springs, each in their own time. Find out how you can help us fight for clean air and reduced emissions.