An Act of Hope for Migratory Birds

North of us, darkening clouds stretched far into the sky. We could feel low rumbles of thunder vibrating through the warm, humid air, sending the ground into trembles. Having just stepped out from the grocery store, we hurried across the parking lot to reach the car before the impending torrential rains.

We glanced up again at the sky as we opened the car doors. It was then that we happened to see the sharp-winged shapes of Common Nighthawks, silently and purposefully beating southward. 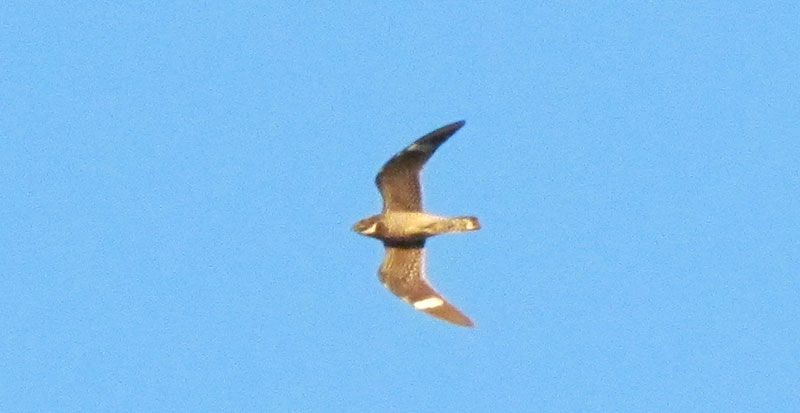 Common Nighthawks are among a group of insect-eating birds that have shown declines in recent years, including here in Maine. They need our protection. (Jeff Wells photo)

Bird migration is now well underway across our continent. In New York City’s Central Park, birders are reporting warblers of many kinds. In our yard, each day seems to bring something new. Tiny American Redstarts, flashing their yellow-edged tails as they quickly dart about, have been prominent for several days. Two Yellow Warblers appeared in the crab apple by the driveway yesterday, and a Yellow-rumped Warbler made its presence known the day before. Nighthawks in small numbers have passed over early evenings during the last week. Bank Swallows, Eastern Kingbirds, and even a Red-breasted Nuthatch—a bird that we don’t happen to usually find in our neighborhood because of the lack of the spruces and firs that the species prefers—have visited on their migratory journey.

These sightings are enough to lift the spirits of any birder. But those of us who have a passion for wild birds have struggled to find hope in the last few years. One major reason is that the current federal administration has worked so hard to destroy one of the most important bird protection statutes ever enacted anywhere in the world.

That legislation is called the Migratory Bird Treaty Act.

It became law just over a hundred years ago to codify a remarkable treaty between the U.S. and Canada (actually Great Britain on behalf of Canada at the time). That treaty was itself called the Migratory Bird Convention. As a stark contrast to today’s federal leadership, that treaty, and then the enacting law, was negotiated and signed in the midst of the co-occurring tragedies of the Spanish Flu epidemic and World War I.

That was incredible leadership and foresight.

In the midst of our world’s current crises, instead of leadership and hope to deal with the tragic declines in birds in recent decades, we have seen the opposite. As the Natural Resources Council of Maine’s federal team knows well, the current administration announced in recent years that it would no longer continue enforcing the Migratory Bird Treaty Act the way other administrations had over the decades. Like NRCM, National Audubon has also made protection of this important safeguard a high priority.

Thankfully, a ray of hopeful light shown down on us bird lovers just this past week. A Federal District Court judge ruled that the current administration’s abandonment of its 100-year-old duty to protect birds as described in the Migratory Bird Treaty Act was unlawful and wrong! Of course, it remains to be seen whether the government in power will actually follow the rule of law and live up to its sacred obligation to make sure those nighthawks and warblers and swallows and other birds are taken care of and not allowed to be heedlessly killed without actions to prevent further losses.

If you follow the news, you can’t help but be aware that the assault on the Migratory Bird Treaty Act is just one of many harmful actions undertaken recently by the current federal administration against the migratory birds that are passing through our backyards, parks, and preserves. But maybe this one bit of good news shows that no government can ignore the law. And let’s hope it also sends a strong message to all political leaders out there that the tens of millions of us in the U.S. who love birds will vote for leaders who support policies that benefit rather than harm them.