The term “dioxin” describes a group of highly toxic chemicals that are produced by several industrial processes that use or burn products containing chlorine, including incinerators and “kraft” paper mills. Dioxins are among the most potent toxic chemicals known.

What are the Effects of Dioxins on Human Health?

There is compelling scientific evidence that dioxins can cause cancer and disrupt hormonal, reproductive, and immune systems in people. The developing fetus and breastfeeding infants are particularly sensitive to the harmful effects of dioxins. Studies suggest that dioxins are also an “endocrine disrupter” – one of a number of toxic chemicals that interfere with our hormone systems by mimicking natural hormones and blocking or disrupting their normal action.

Are Certain People at Greater Risk?

While dioxins are a general public health hazard, they pose even greater dangers to certain groups:

Are Dioxins a Hazard for Wildlife?

Yes. Animals on the top of the food chain, such as birds and mammals that eat contaminated fish, face the greatest risks. Last summer, the U.S. Fish and Wildlife Service (USF&W) linked dioxin discharges from the bleach kraft mill in Lincoln with the reproductive failure among Penobscot River bald eagles. Reproduction among eagles nesting within roughly two miles of the Lincoln mill has been as low as 40% below the statewide average. USF&W also examined total dioxin contamination of bald eagle blood and eggs, and found levels in unhatched eggs near the Penobscot River exceeded “safe” levels by up to 85 times.

How Does Dioxin Get into People and Wildlife?

Dioxin get into the bodies of people and wildlife primarily through food.

Dioxins generated by burning of certain plastics and other chlorine-containing materials from incinerators and other sources travel through the air and can fall out on our farmland and food crops. Cows and other animals eat the grasses and plants on which the dioxins have fallen, which contaminates their milk and meat. 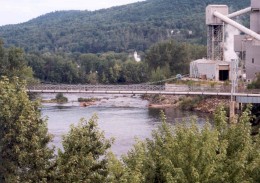 Dioxins enter the water food chain – aquatic insects, fish, and shellfish – indirectly from “fall-out” from air and directly from the wastewater discharge pollution from certain industries. In Maine, the discharge of dioxins by “bleach kraft” paper mills contaminates fish in papermaking rivers and the tomalley of lobsters in the bays of these rivers to levels that make them unsafe to eat.

Although there are a number of sources of dioxins in our environment, bleach kraft paper mills are the most significant source of dioxin contamination in Maine’s waters. Therefore, elimination of dioxin discharges from these mills is not only a priority but also essential to allow people to enjoy the full economic, recreational, and environmental benefits of our largest waterbodies.

What is the Extent of Maine’s Paper Mill Dioxin Problem?

In 1985, more than 30 years ago, dioxins were first found in fish below Maine’s seven “bleach kraft” paper mills that use chlorine compounds to bleach their paper. These seven mills discharge more than 100 million gallons of wastewater a day to the Penobscot, Kennebec, Androscoggin, Presumpscot and St. Croix Rivers. Although the levels of dioxins in mill wastewaters are sometimes undetectable by conventional methods, they are nonetheless enough to contaminate the fish and shellfish because fish act like sponges for dioxins, accumulating them at 25,000-50,000 times the concentrations present in their environment.

Today, women of childbearing age are still warned strictly limit their intake of fish caught from 250 miles of Maine’s rivers below paper mills and NO tomalley from lobsters caught along the entire coast. And the general public is advised to severely restrict their consumption of dioxin-contaminated fish and tomalley.

Yes! Papermaking technologies are available and in use today in the United States and worldwide that would eliminate dioxin discharges by using non-chlorine bleaching processes. These processes pave the way to “closed loop” mills that will not discharge any bleaching wastewaters, thereby drastically reducing the discharge of other toxics, turbidity, color, odor, foam, and oxygen-depleting materials. Totally chlorine-free (TCF) papermaking process produces products that are of a brightness and quality comparable to products bleached with chlorine.

On April 8, 1996, Governor Angus King announced that the state’s seven bleach kraft pulp and paper mills had signed on to the goal of eliminating the discharge of dioxins. Since then, the paper industry has consistently argued that their pledge to “eliminate” dioxins does not mean that their contribution of dioxins to Maine’s waters will be zero.

No. Maine mills claim that a switch from elemental chlorine to chlorine dioxide will “solve” the dioxin problem. However, the chemistry of the ECF process clearly shows that the main bleaching agent, chlorine dioxide, is still capable of producing dioxins. Research by both the pulp industry and the Environmental Protection Agency demonstrates that chlorine dioxide bleaching does not ensure total elimination of dioxins. Totally chlorine free bleaching processes will do the job.