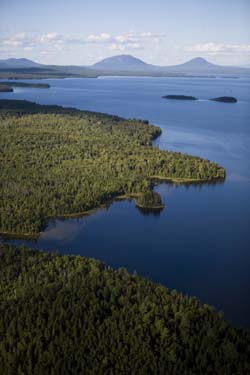 On October 18, 2010, NRCM filed our reply brief in response to the Maine Attorney General’s brief filed earlier this fall.

On July 27, 2010 NRCM’s brief was filed in our appeal of the Plum Creek decision made by LURC. Read the full brief here.

Attachments to the brief:

In this effort to protect Maine’s North Woods from unplanned, sprawling development, NRCM filed a lawsuit in Maine Superior Court to appeal LURC’s Plum Creek development decision. After spending countless hours reviewing LURC’s decision, and sharing the frustration of Maine people, it became clear that there were substantial grounds for an appeal and a need to do so.

Q: Why did NRCM appeal?
A: The decision on Plum Creek’s application could set a precedent for future development proposals in the North Woods. We need to make sure it is a good precedent, not a bad one. Read NRCM’s appeal and full statement.
Q: What will be the outcome if NRCM’s appeal is successful?A: We will ask the Court to reverse the Land Use Regulation Commission’s (LURC) decision and, consistent with LURC’s earlier determination, deny Plum Creek’s application because it fails to meet the requirements of the law.

At that point, LURC could choose to do a prospective regional plan for the Moosehead area, taking into account the interests of all landowners, not just Plum Creek’s, and allowing members of the public to voice their vision and desires for a regional plan, rather than just responding to Plum Creek’s proposal. Alternatively, Plum Creek could propose a different plan that meets the requirements of the law.

In any future planning process or review of a revised proposal from Plum Creek, information that came up too late in the Plum Creek concept plan review process or was given short shrift by LURC could be considered, including information about newly discovered vernal pools, lynx habitat, and wild brook trout streams.

Q: If this appeal is successful, how might the Court’s decision affect Lily Bay and other places around Moosehead that Maine people want to see protected?

A: If LURC’s approval of Plum Creek’s plan is overturned, the 10 development zones, including Lily Bay, currently zoned for development by Plum Creek would revert to being zoned primarily for forestry and non-intensive recreation, like most of LURC jurisdiction.

Q: What happens to all the conservation that is a part of Plum Creek’s plan?

A: There are three primary parts to Plum Creek’s conservation package:

Q: What is the process of the appeal?

A: NRCM and two other parties have filed appeals with the Maine Superior Court in Kennebec County. The State will provide the formal record to the Court, then the Court will establish a schedule for filing briefs.

After the appealing parties file their briefs, the State of Maine and Plum Creek will file their briefs in opposition to our appeal. The appealing parties will then have an opportunity to file additional briefs. Thereafter, the Court will likely schedule a time for oral argument by the lawyers. The court will then render its decision, most likely in writing some days or weeks after the oral arguments. This process is likely to take a number of months.

If the appeal to the Superior Court is unsuccessful, a further appeal can be filed with the seven Justices of the Maine Supreme Court acting as the Law Court.

Q: If Plum Creek does not want to wait for this appeal to be decided, and decides to sell some or all of its land in the Moosehead region, what happens?

A: Plum Creek can sell any or all of its land within the concept plan area at any time, but the land is subject to the development and conservation requirements of the plan until the plan is overturned by a Court or until Plum Creek notifies LURC that it wants to terminate the plan.

Q: Does this appeal affect state or federal consideration of the significance of Canada lynx habitat around Moosehead?

A: On February 25, 2009, the entire area covered by Plum Creek’s concept plan was designated “critical habitat” for the federally threatened Canada lynx. The appeal does not affect that. If Plum Creek moves forward to obtain any development permit requiring review by the federal government, the U.S. Fish and Wildlife Service will review the proposed development for its impacts on lynx and lynx habitat under the Federal Endangered Species Act.