Weathering the Storm and a Dip in the Icy Atlantic 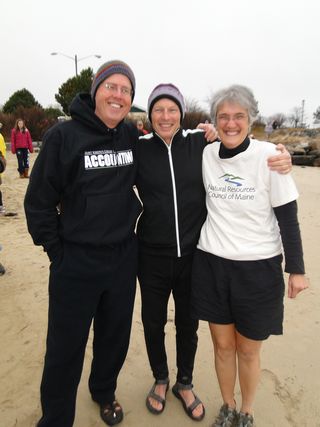 Having survived (can I say “enjoyed?”) NRCM’s New Year’s Eve day Polar Bear Dip & Dash and welcoming in the New Year with a sunrise walk with the dog through the Spurwink Marsh, I feel like I am entering 2012 with a good reserve of energy and optimism. Looks like we will all need lots of both. Before I go further, let me thank all those runners and dippers who joined us for the Dip and Dash (that’s me in the middle, with NRCM Board Treasurer Chris Bond and Executive Director Lisa Pohlmann). Record numbers and lots of enthusiasm—put it on your calendar for December 31, 2012, bring an old pair of sneakers, and the rest is easy.

No sooner had I submitted a letter-to-the-editor of the Portland Press Herald praising the EPA and our Congressional delegation for finally enacting strong controls on mercury than our governor’s administration garners front-page attention by stating it costs $6,000 to keep a pound of mercury out of our environment. This mercury, if not reclaimed, could end up in our land, or water, or head to be burned in an incinerator and become airborne.

Our long-standing commitment to the North Woods faces another key test January 10th when the Superior Court hears oral arguments on our Plum Creek appeal. Remember, we appealed the initial LURC decision based on two key areas. First, was the issue of “paid mitigation,” an oxymoron if there ever was one. Plum Creek was reimbursed for conservation that they were required to provide to offset the damage that would result if the company’s  massive Moosehead development becomes reality. Second was the impropriety of LURC commissioners voting to approve Plum Creek’s revamped development application without proper and required public input. We won our appeal, and this most recent court appearance is the appeal of that decision. Our attorney, Russ Pierce, has done great work throughout this process and will be representing us.

I’d like to end with a sincere thanks to you all for your loyalty to and generous financial support of NRCM. You have helped us weather the “perfect storm” of challenges, continued economic recession, a transition at the senior leadership position, and a hostile state administration and Legislature. To have faced those challenges and emerged in our current strong position is really a testament to your commitment to protecting the nature of the state we love. Full speed ahead.