A Second Chance for the Moosehead Lake Region?

From 2004 through 2009, the Natural Resources Council of Maine (NRCM) worked hard to stop Plum Creek’s sprawling development plan for the Moosehead Lake region. During a four-year permitting process that included extensive comments from NRCM, the plan was amended in many ways to reduce impacts on remote ponds and resources; significant conservation was required; and restrictions on the type, amount, and location of development were added.

When the final Moosehead Region Concept Plan was approved by the Land Use Regulation Commission in 2009 (after multiple revisions), NRCM applauded the conservation measures but had continuing concerns about the amount and location of much of the development. We appealed the decision in court, particularly due to the risks posed by a possible resort at Lily Bay. Although we won an initial court ruling, the Land Use Regulation Commission ultimately prevailed.

Now it appears that market forces may have finished the work NRCM began.

Recently Weyerhaeuser, one of the world’s largest timberland owners, announced that it wants to terminate this Concept Plan that it acquired from Plum Creek when the two companies merged in November 2015. This plan would currently allow Weyerhauser to build two resorts, including at Lily Bay on the west shore of Moosehead Lake, and more than 2,000 new housing units in the Moosehead region. 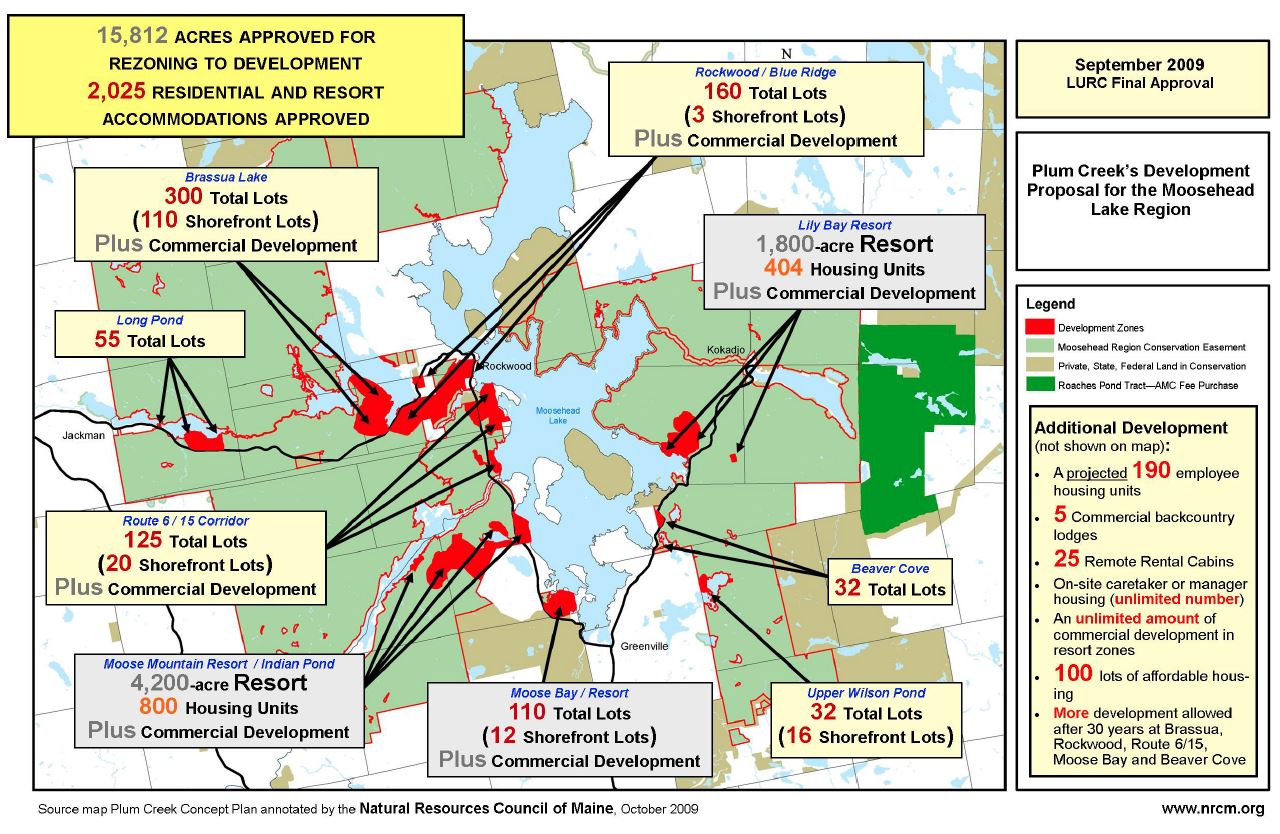 Click on link to open full-size version of map

As of October 2019, most of the required conservation measures in the plan have been permanently put in place and will not be affected if the plan is terminated. These measures include 363,000 acres of land now under a conservation easement, and 30,000 acres sold to and protected by the Appalachian Mountain Club. None of the development has occurred.

Weyerhaeuser’s announcement may confirm our view, expressed throughout the permitting process, that Plum Creek’s sprawling proposal was completely out-of-sync with the realities of the real estate market in the region. That was true before the 2009 recession and seems to remain true today. After careful analysis, we conclude that terminating the Moosehead Region Concept Plan could present opportunities, but it does not eliminate the possibility of inappropriate development in the area that could forever harm the Moosehead region.

Under the new adjacency rules, these areas would not have to comply with limitations in the current plan regarding the number of houses, noise and light standards, or restrictions on timber harvesting in development zones to ensure that development is shielded from important public viewpoints, including Moosehead Lake. The end result could be the same or more development than under the concept plan, with fewer protections for the region’s scenic beauty and wildlife. We must guard against this possible outcome, and you can be sure that NRCM will. 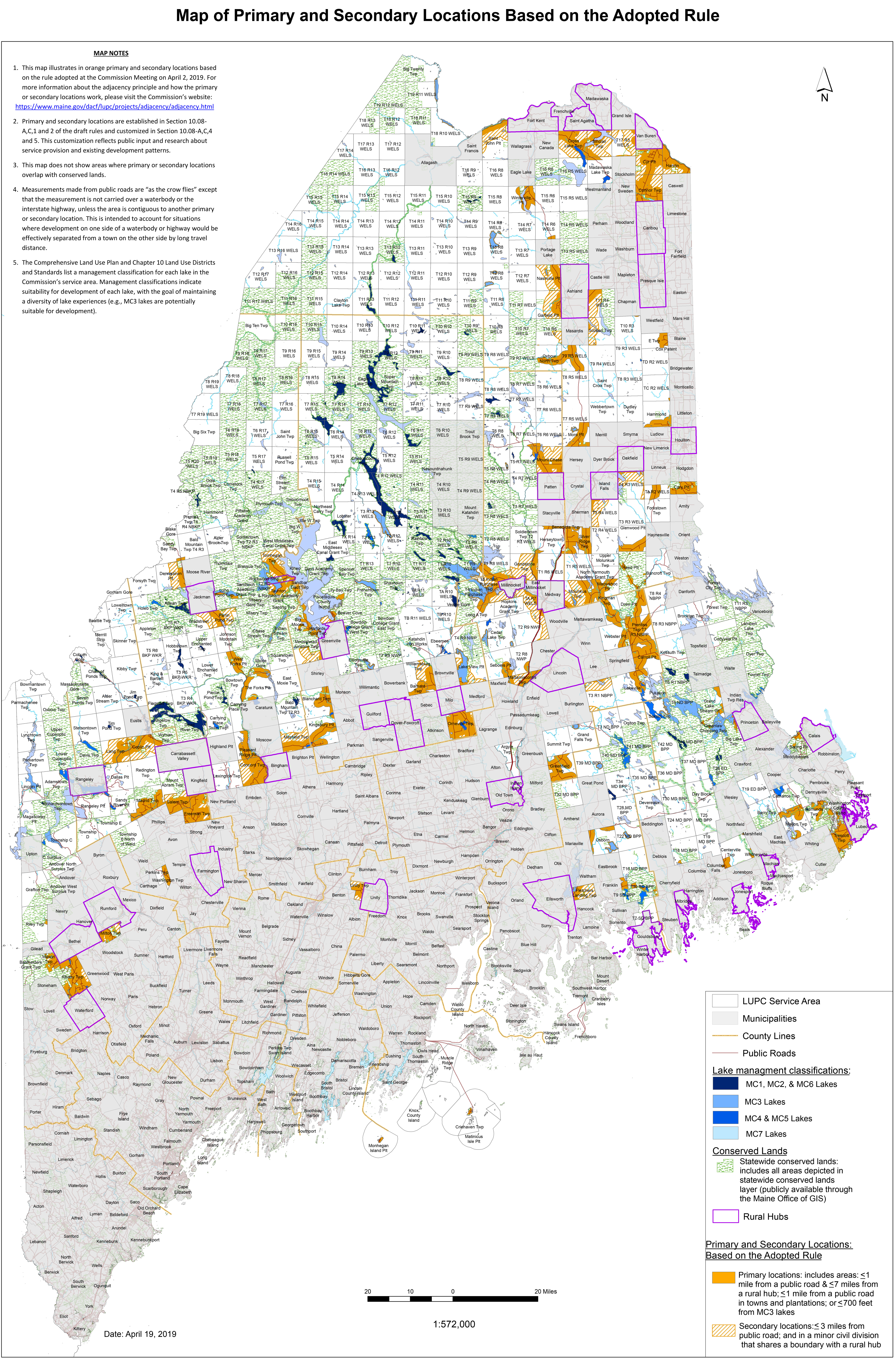 However, Weyerhaeuser’s announcement offers opportunities as well. If Weyerhaeuser’s interest in development has truly waned as the company suggests, then perhaps Weyerhaeuser will be interested in further conservation in the area. The Lily Bay resort zone would be a wonderful addition to Lily Bay State Park. The resort zone proposed for the north side of Moose Mountain could be a great addition to the Little Moose Public Reserved Lands Unit. Some of the lands on Brassua Lake, Upper Wilson Pond, or the Blue Ridge could be protected through LUPC zoning or added to the conservation easement. There may be other ideas.

The Land Use Planning Commission, at its meeting on October 9, 2019, directed its staff to begin talking with residents in the region about their interest in creating a land use plan for the region, including Weyerhaeuser’s 17,000 acres. This would be an opportunity for the public to decide where in the region they want future development and what areas they would like to see conserved. The public, working with LUPC staff, could develop a plan that reflects the public interest, not just the company’s interest. Weyerhaeuser has indicated its willingness to put any development plans on hold for two years to allow the region time to develop a plan. NRCM could support a community-guided plan that directs development to be located close to Greenville and Rockwood, which is what we have advocated for all along.

The Commission indicated that they would be reviewing the impacts of terminating Weyerhaeuser’s plan over the next six months while they simultaneously determine the level of local interest in a regional plan.

The Moosehead region may have just been given a second chance to chart its future, but NRCM will monitor this issue closely during the months ahead.