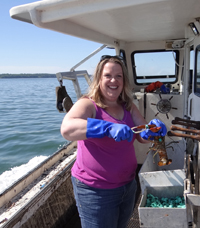 I get to do some pretty cool things thanks to my job at the Natural Resources Council of Maine. I met Bonnie Raitt at a concert on the eve of the removal of the Edwards Dam.  NRCM was invited to work at a Phish concert (how cool is that?!) in Augusta. I met Senator George Mitchell when he spoke at two separate NRCM annual meetings. I got to drive to Washington County earlier this month to take part in a celebration of the return of alewives to the St. Croix River. And I have even gotten to plunge into the icy cold Atlantic Ocean (four times!) to raise funds for and awareness about our work to curb global warming pollution as part of our annual Polar Bear Dip & Dash.

The latest activity to add to my “cool activities for my job” list happened just a couple of weeks ago, not too far from my home. I “got” to get up at 4:30 in the morning and drive to South Harpswell to spend the day with a high school friend on his lobster boat. I had asked him if I could come take some photos of his boat, his traps, and maybe a lobster or two, and his response was, “Do you want to come out on the boat with us?” My response was instant: Do I? I sure do…and I sure did! 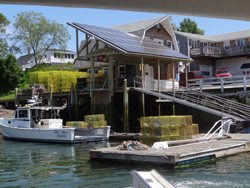 Potts Harbor Lobster, South Harpswell. They believe in protecting Maine’s environment so installed solar panels in 2012. They also protected their wharf as a working waterfront in 2010 with Land for Maine’s Future funds.

I arrived at the Potts Harbor Lobster Company wharf ahead of schedule as I wanted to show that I was ready and excited about the day! I had never been on a lobster boat and my “sea legs” are a little wobbly…but I was thrilled to be able to check this item off my bucket list while also catching up with a long-time friend.

The morning consisted of watching Jim and his sternman Will load the containers full of pogies onto the boat, which would later be used as bait in the traps that they hauled in. These traps they would then launch off the back of the boat to make their way to the ocean’s floor, in hopes of catching fresh, delicious Maine lobster.

We left Potts Harbor on the most beautiful, warm, sunny summer morning. I could not believe my luck! We were going to haul a few hundred traps on the first day that they would be pulled in their summer location. I was so happy to hear that! When they lobster in the winter, it is twenty to forty miles off shore…I will send another NRCM staffer to get those photos!

While out on the boat, I was able to talk to Jim about lobstering, lobster habitat, threats to lobster and other ocean creatures, and learn about the life cycle of this iconic Maine animal. 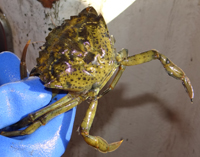 Green crab that we caught in one of the traps.

When you haul in lobster traps, the other ocean life doesn’t realize they are just for lobster, so when the traps came in, I found that they were often filled with flounder, sea bass, and lots of crabs. I had heard in the news that global warming is causing a rise in the population of green crabs, which feast on small clams and mussels, wreaking havoc on Maine’s clamming industry. Jim echoed what another lobsterman said in the news story, that green crabs are now showing up in areas where they hadn’t been before, and that is a problem for clammers and lobstermen, whose bait is being eaten by the crabs.

Jim has been lobstering his whole life, setting his first few traps at age eight. He said, “Anyone who tells you they know everything there is to know about lobstering is wrong.”  He said that there is always something new to learn. One thing he doesn’t have to learn, however, is the importance of a clean environment for Maine’s lobster industry. He showed me a lobster with a diseased shell so I could see what it looked like. The lobster he showed me was lucky, as once it shed its old shell and only had its new shell, it would no longer have the disease. He said that while that disease has always been around, it is much more prevalent in places where the water is more polluted—like Long Island Sound and Boston Harbor. Maine has a beautiful, clean ocean environment, but climate change and other environmental and industrial changes could ruin all of that. 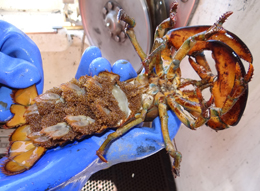 Jim talked a lot about conservation. He showed me how to measure a lobster’s shell and how to check the female lobsters to be sure they don’t have eggs on them waiting to drop and hatch. Did you know that if a lobster has even one small egg (pictured here) on her belly, it is illegal to harvest her? Jim showed me how diligent lobstermen need to be because harvesting lobsters that are too small or too big, or ones that are carrying eggs, means harm to future lobster harvests. Well, lobstermen are being careful to ensure that their catch is not going to have ill effects on the future of their industry, so it made me realize that we all need to be just as diligent. We need to do what we can to preserve this fishery and the way of life for generations of Mainers.

I watched Jim and Will work hard all day (my work consisted of staying out of their way and not getting my foot caught in the rope tied to the traps that were sent back into the water after they were cleaned out and baited). It was back-breaking work, but work that they love and were happy to share with me. They realize the importance of doing all we can to protect Maine’s environment from global warming. As a matter of fact, Jim recently had solar panels installed on his business. He also worked with the Land for Maine’s Future program in 2010 to protect his wharf as working waterfront.

I had a fun and informative day with an old friend. I learned some new skills (I hope someone will endorse me on LinkedIn for my “lobster claw banding skills” that I acquired on the boat that day!) and I saw first-hand the importance of protecting Maine’s lobsters from the threat that global warming pollution. I will do all I can to “keep Maine lobsters cool”—at least until they end up on my dinner plate.