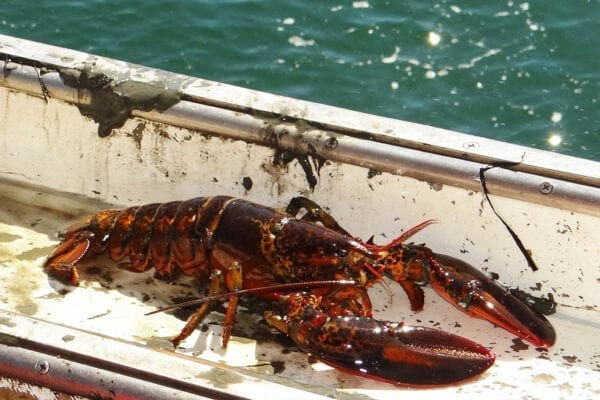 Cool Fact: Lobsters can “throw a claw,” which means they can discharge it from their body and grow a brand new one.

To many of us who live in Maine year-round, the hundreds of thousands of multicolored buoys dotting the surface of coastal waters have become part of the background, barely noticeable. To visitors and seasonal residents, those buoys and the lobster they represent are iconic of the Maine coast. Eating lobster is one of the top reasons why tourists visit. As the largest and most valuable fishery in Maine, lobstering defines many of Maine’s coastal communities. Indeed, our shoreline scenery would seem empty without Homarus americanus.

The American lobster is an invertebrate animal (without bones). As arthropods, lobsters join spiders and insects in having an external skeleton (in this case, a shell) and a segmented body. Two-part jointed limbs make them Crustaceans; 20 body segments place them in the class Malacostraca; and ten legs make them Decapods.

They hatch from eggs and begin life in spring and early summer as free-swimming, algae-eating larvae, transported by currents along the Northwest Atlantic shelf before they eventually “settle” to the sea floor, a phenomenon tracked by the American Lobster Settlement Index.

Once on the bottom, they seek out dark caves and crevices in craggy areas, or else roam the rocks and gravel scavenging for food and fighting off competitors with their two large specialized claws. Lobsters are present in the Gulf of Maine year-round, although they do migrate to deeper water offshore in winter. Some lobsters have been known to roam more than one hundred miles.

Many people credit conservation by fishermen and other management measures for the abundance of lobster in the Gulf of Maine; this spring, the Maine lobster fishery was certified sustainable by the Marine Stewardship Council. Lobster populations have also boomed because their primary predators, large bottom-dwelling fish like cod and halibut, have been fished to near extinction. The sea floor is so crowded, lobsters are spilling over into marginal habitat—sand and mud bottoms with sparse shelter. Blue and calico lobsters seem to be showing up more often; the odd coloring is the result of a genetic defect that causes the lobster to produce excessive amounts of certain proteins, according to the Lobster Institute at the University of Maine. Some lobsters have even turned to cannibalism, as demonstrated recently by UMaine researchers using underwater cameras.

It takes about five to seven years for the lobster to reach legal size for harvesting. Lobsters grow by molting, or shedding, their old shell and growing a new one to accommodate growth. This usually happens in mid- to late summer, but warming waters in the Gulf of Maine are believed to be provoking an earlier shed. Climate change threatens lobster in other ways, too: warmer temperatures create a whole new environment of predator and prey, and foster disease-causing pathogens. And scientists and fishermen are still trying to figure out how exactly lobsters will be affected by ocean acidification, the process by which carbon dioxide from the atmosphere enters the ocean and through chemical reactions turns to acid. A more acidic environment doesn’t sound like a good thing for an animal protected by a thin shell made of easily dissolved material (calcium carbonate). Lobsters evolved about 140 million years ago; they’ve never known an ocean like the one they are experiencing now.

It’s a lot to think about, sitting at some oceanside picnic table, staring at the buoys stretching to the hazy horizon as you wait for your steaming red lobster to cool down enough to eat.