“Naked & Afraid”? How about Feathered and Fearless!

As we’ve had to spend more time at home due to COVID-19, we have taken to doing more of most things we already do around the house—yard birding, yard work, reading, housework (OK, maybe not more housework!), jigsaw puzzles…and a bit more TV. Since we tend to gravitate toward natural history-based shows, perhaps it was inevitable that we would stumble upon a reality show on the Discovery Channel called “Naked and Afraid.” The show’s premise is that a man and a woman (complete strangers) who have some measure of primitive wilderness survival skills are placed in a remote and physically challenging location: Amazon jungle, African savannah, foothills of the Himalayas—places no doubt many members of the Natural Resources Council of Maine have visited, though not under these extreme conditions. These individuals have no clothes and are allowed just a single bring-along item of their choosing (usually a machete or fire starter).

Their challenge: survive for three weeks. This usually means making a shelter, finding food and water (which almost always requires making fire), and… oh, yes, avoiding getting eaten by enormous crocodiles and other large, toothy predators, or becoming incapacitated by poisonous snakes and dangerously toxic spiders and scorpions.

Meanwhile, their every move is captured on film by a TV crew who blasts it all, along with images of their bare butts (other private parts are blurred out) to millions of TV viewers who should be watering the garden but just have to see if the elephants really do trample through the survivalists’ new and improved boma. Over 21 days, every foible, every quarrel, every accident, and always their long-grinding misery of sleeplessness, sunburn, insect bites, freezing cold or stifling heat (sometimes both), rains, floods, dehydration, and slow starvation are broadcast for the world to see.

In other words, they do what birds and other wildlife do every day, including for many species, being reality TV personalities (puffin cams, anybody?) 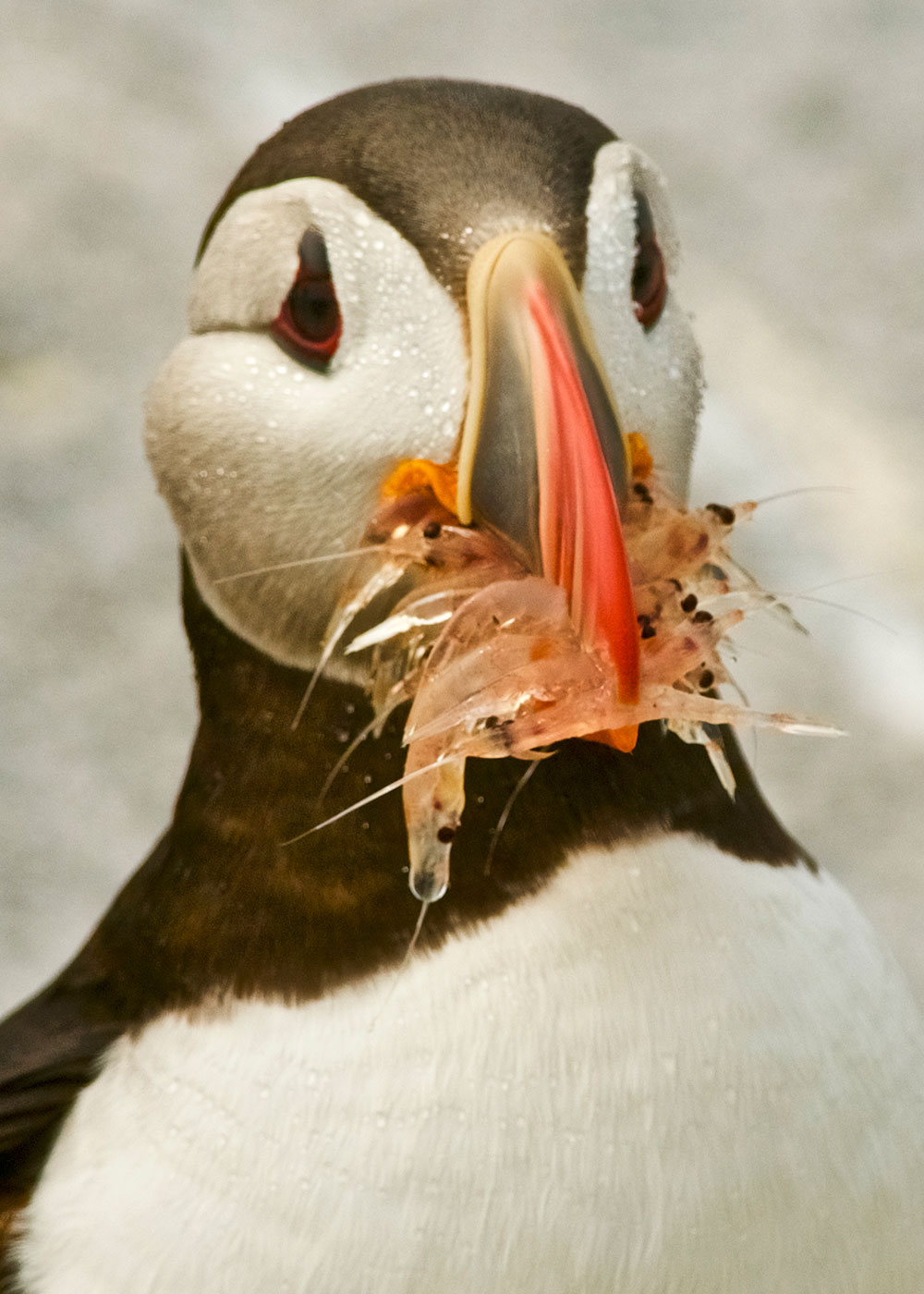 Like the survivalists on “Naked and Afraid,” Atlantic Puffins are the stars of their own reality show. But unlike on the TV show, birds can’t opt out when their survival skills become severely tested. (Photo by Gerard Monteux)

Occasionally, one of the survivalists will suffer an accident resulting in a serious injury (fingers laced open by their mishandling of the machete is a popular wound), or become stricken with a life-threatening illness (hypothermia and sunstroke are often on the table), or collapse from lack of food (who’d have guessed that a meal of grubs would be on so many wish lists!). Fortunately for the participants, they can opt out at any time. To do so in front of a TV audience of millions is embarrassing to say the least.

But, unlike birds and wildlife, at least they have the option to bail when the going gets just too rough.

Watching these individuals struggle with the simplest human needs, like finding and taking steps needed for drinkable water, and trying to find enough food to keep them going for three weeks, has made us acutely aware of the remarkably amazing survival skills of the earth’s wild creatures.

Most of us humans, in our country at least, can turn on a faucet and get a drink of clean water any time we are thirsty, without a thought. Seeing the people on “Naked and Afraid,” their lips cracked and dry, crying in desperation for a drink of water, makes you realize what a luxury that is.

Have you ever thought about where the nearest fresh water sources are in your neighborhood for birds? 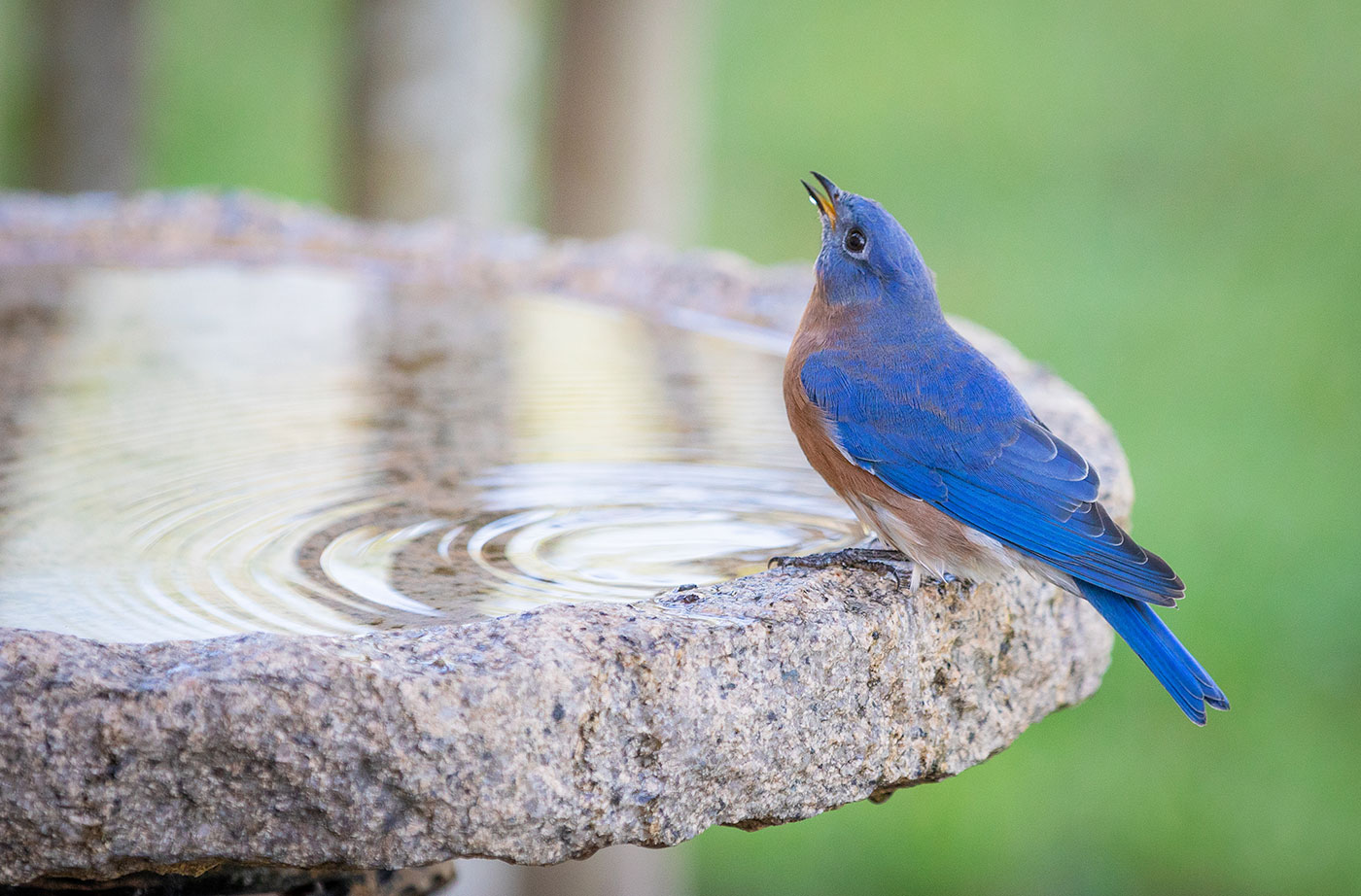 For most of us here in Maine, getting drink of clean water means turning on the tap. For birds, like this Eastern Bluebird, it requires much more work but is no less important. Many bird enthusiasts maintain bird baths, to help.

There is a stream that flows year-round less than a quarter-mile from our house. We often watch bright red Northern Cardinals, noisy Blue Jays, friendly Black-capped Chickadees, and many other birds dropping down from our yard and other parts of our neighborhood toward the stream edge. Presumably, at least at times this is to get a drink of that precious water. During the recent blistering hot days, we have unfailingly kept our bird bath full; as a result, we have been enjoying the reality show right outside our kitchen window that also features American Goldfinches, Song Sparrows, and other birds coming in to bathe and quench their thirst. Butterflies and other insects make guest appearances as well.

Finding food is also always incredibly difficult for the people on “Naked and Afraid.” Watching them wade carefully through mucky shallows desperate for a frog to devour reminds us of the Great Blue Herons we see stalking for their own meals—only it’s a way of life for the herons, whereas the brave humans must endure this tactic for just a few weeks. 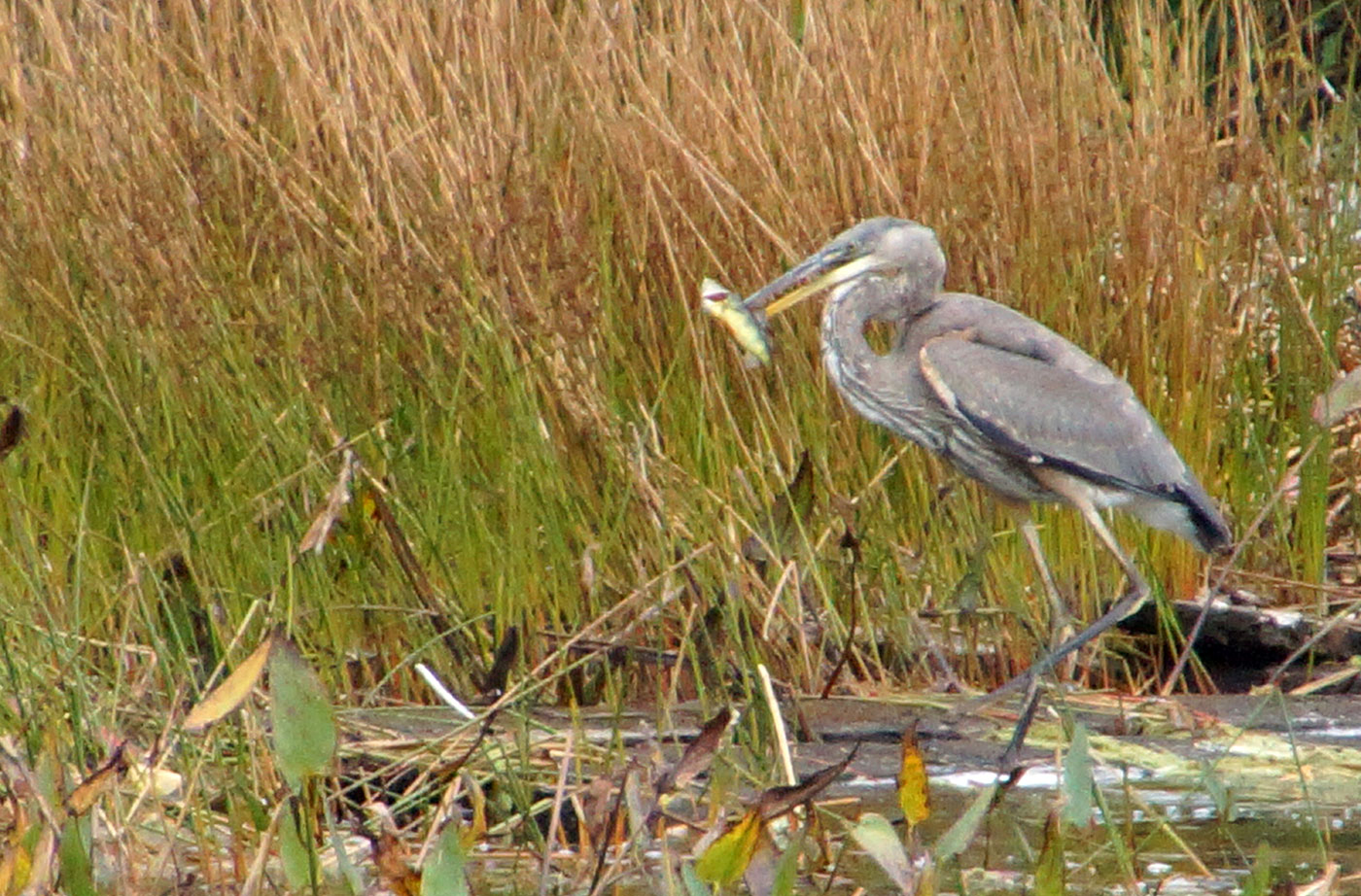 Watching the survivalists on “Naked and Afraid” wade through mucky shallows in a desperate search for food reminds us of the Great Blue Herons we see stalking for their own meals—only it’s a way of life for the herons, whereas the brave humans must endure this tactic for just a few weeks. (Ignacio Pessoa photo)

Grasshoppers and locusts are desirable snacks for the survivalists on the show, just as they are for the American Kestrels for whom the critters are a vital part of their diet. Watching the show’s daredevils go for the snakes (especially the venomous ones) can induce nail-biting for many viewers; for Broad-winged and Red-tailed Hawks, failing to catch enough of this slithering sushi can mean life or death.

Seeing the humans on “Naked and Afraid” struggle so dramatically with the tasks required to stay alive showcases again the incredible feat that birds perform just by surviving and thriving each day. When you add to it the challenge of finding enough food not only for themselves but also for their young, a bird’s life is even more amazing. In winter, there’s cold and snow cover to contend with.  For migrating species, their hard work is compounded by vast journeys to and from their breeding and wintering grounds that require tremendous amounts of energy.

At the beginning of each episode of “Naked and Afraid,” participants are given a PSR—Primitive Survival Skill—rating (PSR). For birds, that rating is off the charts. They are the true primitive survival skill experts. Unfortunately, their biggest threats come from humans, in the form of habitat loss and degradation, pollution of the waters they need for drinking and nesting, pesticides that kill their prey, and of course, climate change. The work of the Natural Resources Council of Maine and National Audubon are so important in addressing these threats, and although we have had great successes, much more needs to be done.

This is why we so appreciate your support! Learn about ways you can take action with NRCM and National Audubon. And remember to enjoy and appreciate the reality program of the birds all around you. The only thing missing is a title for their show. We were thinking maybe “Feathered and Fearless.” Be sure to tune in to it—you can watch it any time, right outside your windows!