In 1918, the U.S. signed into law a piece of legislation that has shown incredible resilience over the past century. In the midst of the horrific tragedies of World War I and the Spanish Flu, a bright light shown through that resulted in the signing of the world’s first large-scale treaty among nations to protect wildlife. Indeed, it is a testament to the foresight of those who made the Migratory Bird Treaty Act (MBTA) happen that it was signed into law at all, and it endures today in part because groups like the National Audubon Society and the Natural Resources Council of Maine have stepped up to defend it. As we have written in the past, the MBTA is so important because it prohibits the killing of most birds, the exceptions being waterfowl and a few other species under a system of regulations and hunting licenses. It is illegal to kill or harm other migratory birds. 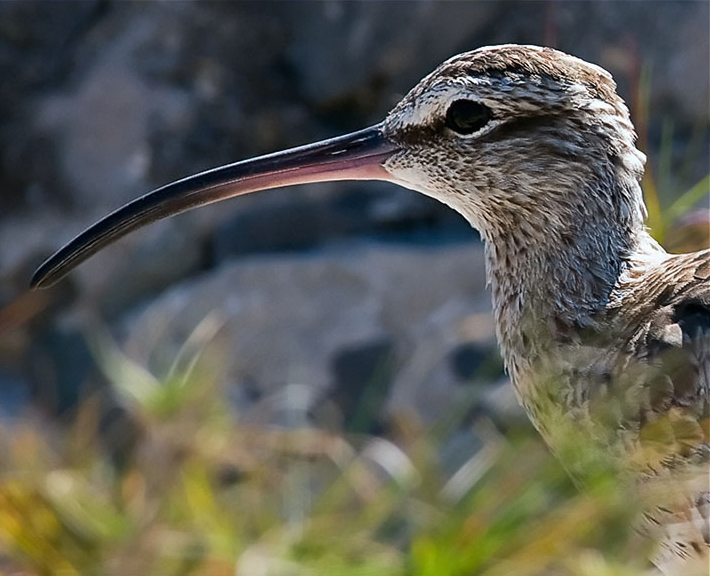 Whimbrels are one of many bird species that have benefitted from protections afforded by the Migratory Bird Treaty Act. Photo by Kirk Rogers

Here in Maine we have seen the benefits of the Migratory Bird Treaty Act. Without it, we might not now be able to see flocks of Common Eiders off our rocky coasts; Short-billed Dowitchers and Whimbrels searching for food in our coastal marshes; gulls and terns—or even our beloved Atlantic Puffins—zipping by us as we scan from a bobbing boat in the ocean.

But the impact of the Migratory Bird Treaty Act has gone even further in protecting birds in recent decades. Pressures resulting in the death and decline of birds have shifted from unregulated hunting, as in the early 1900s, to threats like oil spills, power lines, pollution, habitat destruction, and so many others. The Migratory Bird Treaty Act has been a bedrock part of our country’s powerful legacy of stewardship of the environment upon which we all depend. 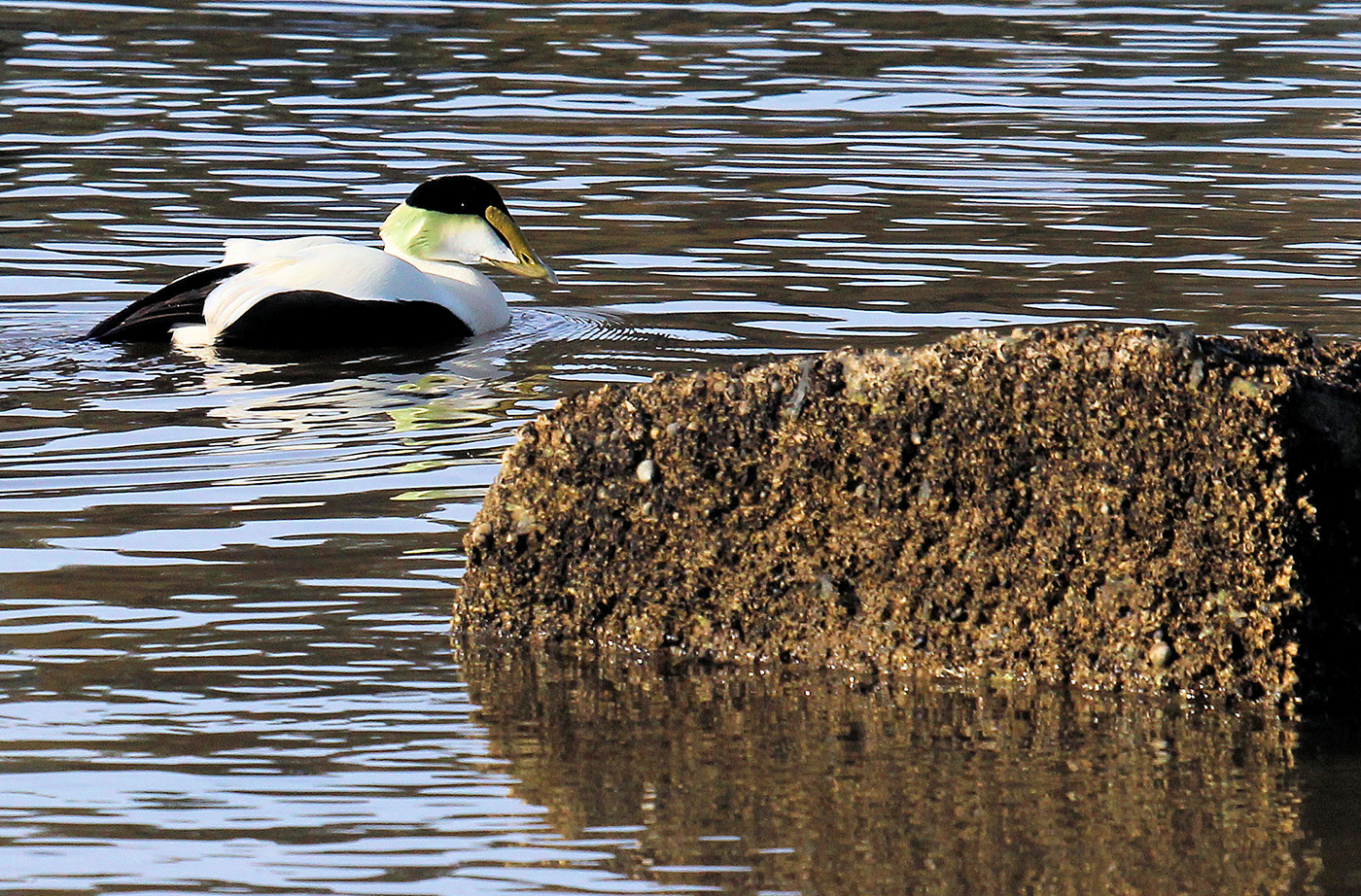 The Migratory Bird Treaty Act mandates that corporations and individuals ensure that they do not kill or harm migratory birds through their actions. Without it, we might not now be able to see flocks of Common Eiders off Maine’s rocky coast. Photo by David Small

Because of the Migratory Bird Treaty Act, corporations and individuals must ensure that they do not kill or harm migratory birds through their actions. We are all required to be responsible stewards. Those who expect that they may unintentionally kill or harm birds while engaged in some lawful activity must apply for a permit and show that they are doing everything possible to avoid causing the harm. They may also have to mitigate unintentional killing or harm by providing funds to restore the bird populations that they have impacted.

Thus the Migratory Bird Treaty Act provides strong incentive for everyone to do everything possible not to have a negative impact on bird populations. It is at the core of the idea of maintaining and sustaining our natural world that we depend on now and that future generations will rely upon. So when a massive oil spill happens, as we saw in the Gulf of Mexico back in 2010 that killed countless birds and caused long-term damage to their habitat, the oil company, BP, was required to help mitigate the catastrophe by providing funding to restore habitat and to work to bring bird numbers back to where they had been prior to the oil spill.

This law has been something Americans could be proud of as a beacon of hope for the world, displaying responsibility to each other in the stewardship of our natural environment. 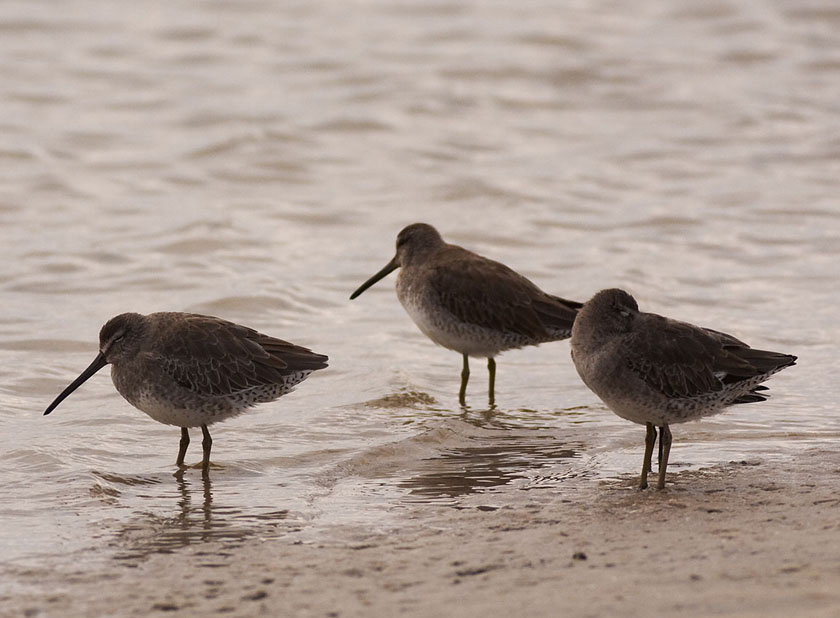 We can still see Short-billed Dowitchers searching for food in Maine’s coastal marshes because of the Migratory Bird Treaty Act. But the Trump Administration wants to weaken protections provided by this bedrock conservation law. Photo by Kirk Rogers

Tragically, the Trump Administration recently announced its intention to formally change the way the Migratory Bird Treaty Act has been implemented over these last 100 years. The Trump Administration intends to make it perfectly legal to kill or harm birds for any number of reasons, including oil spills, pollution, power lines, destruction of habitat—as long as the destroyer can claim that they didn’t mean to do it. Imagine that! Shamefully, the Trump Administration began implementing this wrongful interpretation of the law in 2018—as the rest of us celebrated the one-hundred-year anniversary of the Migratory Bird Treaty Act that has done so much to keep birds and their habitats thriving.

Those of us who care about birds and the natural places that we share with them should not take this attack lightly. Please stay informed about this issue and many others by checking often the websites of National Audubon, the Natural Resources Council of Maine, and other groups that are working to protect birds and their habitats. Keep from missing out on the latest news affecting Maine’s environment, including when and what you can do to take action, by subscribing to our enews. Thank you for caring!