A Different View of the Dip & Dash

I have been one of the people who has attended each of NRCM’s seven polar plunges on East End Beach in Portland. I was there when about a dozen people raced into the icy cold Atlantic to kick off NRCM’s 50th anniversary year in 2009, and I was there for this past event  when more than 200 people ran a 5K race and/or raced into that frigid Casco Bay water at noon to end their year in a memorable way.

Here are the polar dippers headed into Casco Bay. Brrrrr!

I have spent the previous six Polar Bear Dip & Dashes watching the excitement from the beach (for four of those years, I was on the beach and was one of the “crazy” folks who thought a quick dip in the icy cold ocean was a great idea). Last year, I stayed out of the water and behind the camera while my colleague who normally photographs the event decided to give it a go and race in. Fortunately for me…last year it was a mere nine degrees, and I was cold enough standing on the beach that I couldn’t fathom having to race in. This year was a little warmer, but I was happy to stay out of the ocean.

But I wasn’t on the beach. And I wasn’t in the ocean. I was actually on the ocean thanks to the Portland Express Water Taxi. I had tried to find someone with a boat who would take me out into Casco Bay so that I could get a new view of the race—from the water side rather than the land. My colleagues and I thought it would be great to show the world what hundreds of people screaming and thrashing about in the ocean in winter looked like—and to serve as a symbol of individuals getting together for a specific purpose: taking action to address climate change. I had almost given up on my search for a boat when I found the Express Water Taxi. I made a reservation, dragged my dear friend Susan (a former NRCM employee who has been my sidekick at many of the past dips, including the year she dropped my warm, “dry,” post-dip clothes into a mud puddle while she waited for me to take the dip) along with me, and we headed to Portland early this morning.

After a delicious breakfast at Becky’s Diner, we headed out to take some early morning pics of the beach to post on the NRCMenvironment Instagram and Twitter accounts. Then we headed over to Back Cove to greet coworkers and some of the runners who showed up early to gather their runners’ bags and bibs. 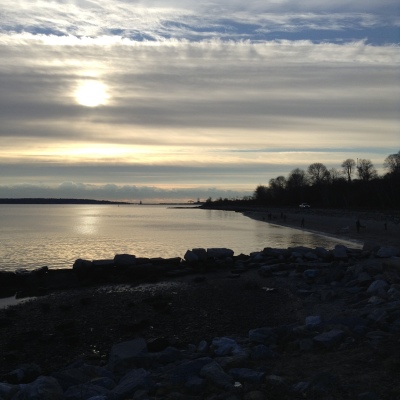 This was East End Beach when I arrived on the morning of the Dip & Dash.

Then, we realized that if we were going to be out on the boat, we needed some gloves that would allow us to push the camera buttons without having to take them off. So…we headed to Renys on Congress Street. We had luck right away and headed off for the dock.

After driving around for a few minutes to get the perfect parking spot, we filled the parking meter and headed to where we thought we would meet the water taxi. We headed down the fairly steep walkway to the dock below and waited. We then spied a water taxi sign on a nearby dock and thought that THAT was where we needed to be. So, it was back up the steep metal walkway, and down an even STEEPER walkway. We waited a little longer. Then we got nervous that we were in the wrong spot. Turns out…we had been on the right dock in the first place. Luckily, we called and our boat driver spotted us, picked us up, and we were on our way! 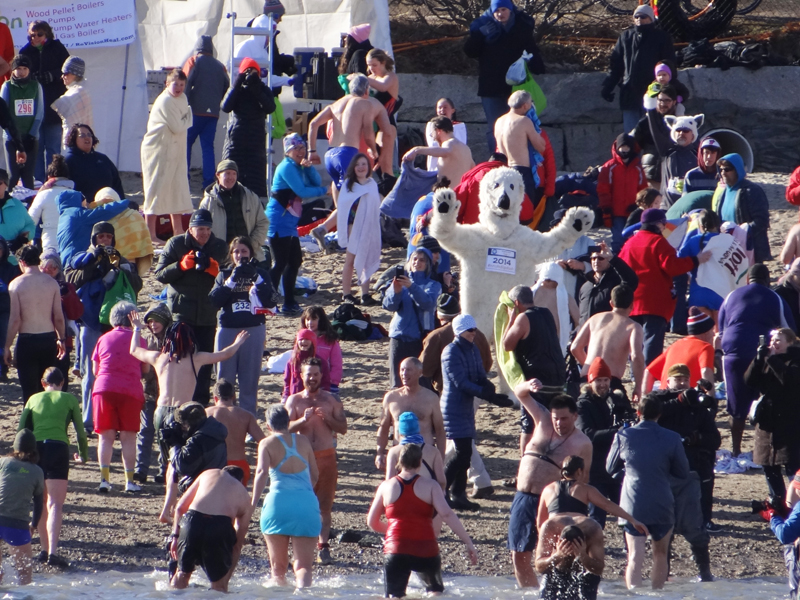 NRCM’s polar bears “Dip” and “Dash” cheer from the beach as people make their way out of icy cold Casco Bay.

I have been out on Casco Bay a few times, but mostly in the summer, and mostly on the Casco Bay Lines ferries. To be on a smaller boat zooming around the bend to head over to East End Beach gave me a view that I had not seen before. Our driver/guide was a very friendly young man who has worked on this taxi for a couple of years, and as we headed to our destination, he pointed out several loons, now in their more drab winter plumage, told us of the large, gray seal (which we saw on our return trip to the dock) that lives in the area, and shared his experiences working on Casco Bay. We had a wonderful ride (inside a very warm boat cabin, rather than on the back of the boat, which we had been concerned was going to be a very cold, windy trip!) to the beach and then waited and watched as the runners finished the race and made their way to the beach. When we arrived, there were a few folks on the beach, but after a quick warm up in the boat cabin again, we went back outside about five minutes before noon, and the beach was PACKED! I had never seen so many people on the beach before (probably because I was usually part of the crowd and couldn’t quite see the full effect of all of those people spread the full length of the beach). We could see, from our unique vantage point, that this was NRCM’s largest polar plunge ever!

We could hear the countdown and cheers and screams as people raced into the water. I snapped away as people raced, splashed, yelled, and cheered their way into, and very quickly out of, the icy cold 43-degree water.

I love being on the beach, talking with people and cheering them on—and I even loved being one of the participants being cheered on (please don’t repeat that to my coworkers who might convince me to dip again)—but I have to say, this was the best (and warmest) view of the race that I have had for any of them. It was fun to see everyone running in, watching their faces as more than 200 people ran into the water at the same time, heading directly toward us. Due to low tide, we were unable to get in as closely as we wanted to, but with a really good zoom lens on my camera, I was able to capture some images that we have never been able to get before. 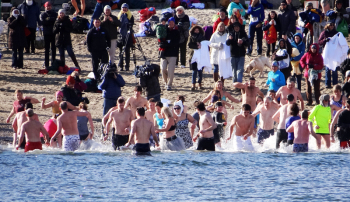 After the dip was over, Susan and I headed to the after-party at the Great Lost Bear to cheer again, for the race winners as they received their awards. And, we had a chance to warm up, talk with folks who had raced or dipped, and have some delicious food.

I cannot think of a better way to end 2014 and start 2015. It was a new view of a fun annual event, from a warm, dry spot, and it was a great way to continue to raise awareness and funds for our work to combat climate change here in Maine. If you haven’t been a part of one of the first seven Dip & Dash events, I encourage you to mark your calendar and join us later this year on Thursday, December 31, 2015. It’s cold. It’s fun. And it’s all for a good cause – to ensure that Maine continues to be the special place we love, for generations to come.

Another cool new view of this year’s Dip & Dash can be seen in this Josh Gerritsen aerial drone video.