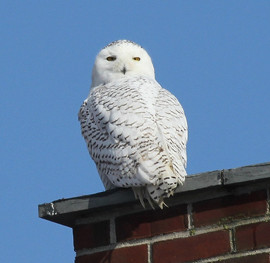 Cool Fact: The hoot of a Snowy Owl is hardly the clear, echoing “who, who, who” that most people think of when think of an owl hoot. Instead, Snowies give low, powerful hoots, with a raspy quality to them, and though it’s typically made by the male, females can hoot as well. Hoots typically come two at a time and can be heard as far away as 7 miles, lofting over on the tundra.

For many people, their introduction to the Snowy Owl came from the cultural phenomenon of the Harry Potter series. Was it by chance that J.K. Rowling chose the Snowy Owl as Harry’s postal courier? Not likely. The mystery of owls make any of them an obvious choice, and the Snowy Owl—a big, (mostly) white bird with striking yellow eyes—is a perfect fit.

This winter is an exceptional one for Snowy Owls. A bird of the Arctic, they continue to sweep southward into the U.S in numbers not reported in decades. That includes right here in Maine.

Research indicates that they are likely here because adult birds had such a bounty of a lemming, a favorite prey item, during the breeding season, resulting in double, even triple the number of offspring they typically produce. But as lemming populations fell back, food became harder to find for such high concentrations of owls. So off they flew, in search of sustenance.

Here in Maine, as many as 70 different birds have been reported from points north, south, east, and west, and dozens of locations in between. One innovative birder has created a map, to help owl enthusiasts stay up-to-date on where the birds have been reported. Hundreds of people, not just “birders,” are taking time out of their busy schedules to catch a glimpse of one (or more!) of these mysterious Arctic visitors, many with cameras in hand, resulting in a gallery of photographs of Snowy Owls from various places around the state.

But Snowy Owls are worth more than a look.

They live fascinating lives and hold secrets known to few but worth hearing about. For example, one reason why they’re easy to see here in Maine is because they are diurnal, meaning, they are active during the day. During Arctic summers, when their world stays light 24 hours a day, they may hunt continuously, soaring over windswept fields and dunes, looking for ptarmigan, waterbirds, squirrels, hares, and other small animals, including, of course, lemming.

By weight, the Snowy is the largest owl in North America, though it may not look it. Its fluff of white feathers may give it a ghostly appearance, adding to its allure. But Snowy Owls have differing degrees of white. Females and young birds generally tend to have more of a salt-and-pepper look, with dark barring contrasting with the white. Males, on the other hand, are typically whiter, a characteristic that becomes more prominent with age.

Snowy Owls are birds of big, open areas such as fields and dunes. Migrants are often also attracted to airstrips, frozen lakes, marshlands, and beaches. Here in Maine, six were found in a single day in Biddeford Pool in December. If they’re on the ground, deciphering them from among the snow can be difficult to impossible, which is why some birders think there are likely many more birds here in Maine this year than have been counted—they have simply gone unnoticed, despite often hardy attempts by enthusiasts to find them. Those that are seen are usually spotted on fence posts, telephone poles, and on top of houses.

More about Snowy Owls Although researchers believe males determine the breeding territory, the female decides on nest location, usually a dry, windswept rise. The nest is a shallow hollow made on bare ground, made by her body. Although it often takes several days to complete, the pair may use the nest site for years to come. The pair have just one brood per year. The female lays three to 11 white eggs, which she incubates for up to 32 days. Young stay in the nest for several weeks. Though probably not typical, Snowy Owls have been known to live to more than 16 years old.

See photos of Snowy Owls from around the state, sent in by NRCM members and supporters.