If you’ve ever wanted to see a Snowy Owl, this is your year. 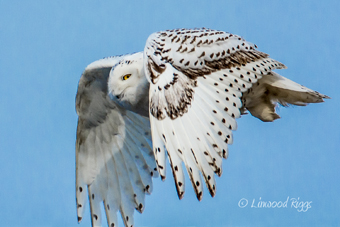 Snowy Owls have been moving into Maine for the winter in higher numbers than we’ve seen in decades. In fact, since late last fall, more than 70 of these magnificent owls  have been reported throughout our state. From the southern reaches of York County to the western mountain region to Millinocket and Caribou, from the midcoast to Mount Desert Island to points Down East, Maine has become delightfully awash in big, white owls. So much so that a friend and fellow birder has created a map of Snowy sightings that he updates weekly based on incoming sightings, as a way to capture the data as well as the excitement.

And exciting it is! Snowy Owls typically spend their life in the Arctic. They feed on ptarmigan, waterbirds, and small mammals such as squirrels and hares—but especially lemming. During years when lemming populations are high, Snowy Owls may feed exclusively on this small rodent, and succeed at raising three times as many youngsters as they typically do. When the lemming population crashes, it can be challenging for this high concentration of owls to find food, so they head south. Although Snowy Owls are not uncommon in winter in places like the northern Plains, Upstate New York, and parts of New England, this winter’s high volume is what birders refer to as an “invasion” or “irruption”— a phenomena characterized by a much higher than average number of migrants arriving in a particular area . They’ve been reported in the U.S. as far south as Georgia and Florida, and one enterprising individual even traveled as far as Bermuda. The invasion has triggered a media frenzy, with stories appearing in the New York Times, Boston Globe, and countless other outlets, including those here in Maine. In fact, many people had probably never heard of a Snowy Owl until WCSH-6 ran a story on the now-famous individual that was trapped in (and rescued from) an abandoned building in Portland. 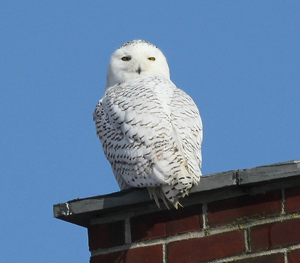 As a result of this extensive “celebrity” coverage, “Snowy Owl fever” has been sweeping through the state (and the country). Here in Maine, an interesting part of the “70 sightings” story is that multiple birds have been seen in several locations. Ten were seen at one time in Biddeford Pool, six were counted on Monhegan Island.  During this year’s Christmas Bird Count, one southern Maine count tallied 16 Snowy Owls. These are just a sampling of sightings that have been seen throughout Maine and beyond. Thankfully, many of these sightings have been captured in photographs taken by birders around the state.

My husband Jeff and I saw two of the Biddeford Pool birds within a mile of each other just last Friday. One was perched atop a telephone pole with the wild Atlantic crashing on the boulders behind it; the other had settled in on a rooftop overlooking the sandy beach of Fortunes Rocks. We watched from a respectful distance in our warm car, peering through binoculars and snapping photos, despite the challenging lighting. During our watch, neither bird did anything more exciting than occasionally turn its head, its large, catlike yellow eyes blinking now and then. It was a great reminder that part of the excitement of seeing a Snowy Owl is just that: actually seeing the bird. Snowy Owls are diurnal, meaning, they are active during daylight hours—a no brainer when you consider the 24 hours of consecutive daylight of the Arctic summer, but a bonus for us Mainers, as “our” Barred, Great Horned, and other common owls typically prefer the cover of night for their prowls. I have seen several Snowy Owls in my lifetime, but I continue to be surprised at how easy it is to see them, if you know where to find them. Which leads to the bigger part of the excitement, at least for me, and that is the mystery each owl holds. I wonder about the majestic Arctic lands where it was born, and about the journey it took to get to Maine—what did it see, what factors influenced the path it took to get here? 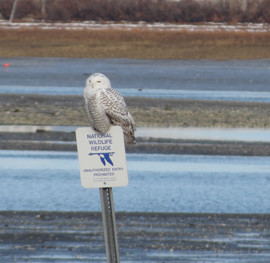 And I wonder if it will survive. Although birders long thought that these far-wandering owls arrive food-stressed, recent science suggest this may not necessarily be the case. A likely reason for Snowy Owl  movements may be an abundance of birds and too little food on the tundra, but that doesn’t doom them to starvation. They grace our presence here in Maine and elsewhere in search of food farther south, and appears that they often succeed, and make it back to their northern breeding grounds in spring.

What is of great concern, though, is that, having come from a place with no motorized vehicles, these birds don’t recognize cars and trucks as threats to be avoided, and may fly unwittingly in front of them, only to be killed. And because Snowy Owls see few if any humans where they come from, they often tolerate close approach, which is all the more reason to stay back rather than cause unnecessary disturbance. Fortunately, the birders and photographers we’ve seen on our Snowy Owl outings have shown they care about the owls and set an example for others by admiring the birds from a respectful distance. Please be sure to show this same kind of care, should you find yourself catching “Snowy Owl fever.” And I hope you do!

As Maine’s environment is providing vital habitat for these Snowy Owl visitors, this underscores the importance of land protection and policies that keep pollution out of our environment that threaten the health of wildlife, including owls. For more than 50 years NRCM has led efforts to put protections in place for Maine’s land, air, water, and wildlife. There are many ways you can get involved in these efforts. You can join our Action Network, attend an event, donate in support of our work, and more. Thank you for caring about the nature of Maine and our planet. Enjoy the owls while they’re here.

Track Snowy Owls across the Country at Project Snowstorm