A 1972 story by the longtime writer for the Portland Press Herald/Maine Sunday Telegram resulted in 400,000 acres of Maine forestland being returned to the people of the state. 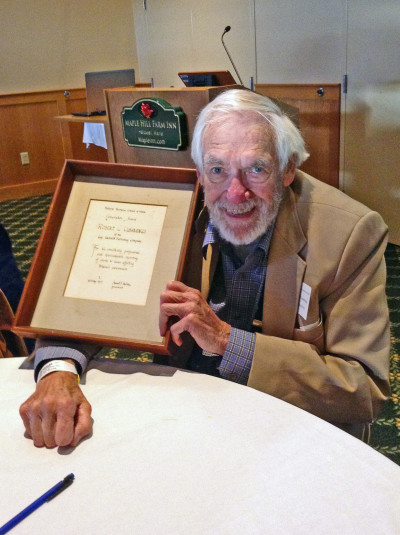 Bob Cummings, whose trailblazing journalism for the Portland Press Herald and Maine Sunday Telegram resulted in 400,000 acres of Maine forestland being returned to the people of the state, died Thursday at his home in Phippsburg. He was 86.

He died after a lengthy illness and a life filled with reporting triumphs, preservation work, serving as a Phippsburg selectman for a dozen years and exploring the state’s wild areas.

He was known for his will – “he had strong opinions,” said his wife of 53 years, Mary Ellen Cummings – and he had a huge impact on Maine’s environmental laws during his reporting career, which ended when he retired in 1991.

Cummings’ biggest story came in 1972, when he reported that 400,000 acres of land had been reserved when Maine sold off 6 million acres of land in the years after it became a state in 1820. Most of the property was presumed to be owned by large landowners, including paper companies, which had cutting rights to the timber on the reserved land.

A decade after Cummings first reported on the subject, the Maine Supreme Judicial Court ruled that Maine did, in fact, own the land. That led to the establishment of preserves around the state, including the Mahoosuc and Bigelow preserves.

Mary Ellen Cummings said Saturday that her husband learned of the story a few years before, when he was working for the Bath Daily Times, but he didn’t have time to pursue it.

He filed it away until it popped back in his head when he was working at the Portland Press Herald, which he joined in 1967, after the Bath paper merged with what was then the Brunswick Record, she said.

“Somebody asked if he had a story for that day and suddenly, the public lots story popped into his head,” she said. It touched off dozens of stories over a decade.

Cummings said he had trouble convincing his editors that the story was important.

“Most found the idea that the state could misplace 400,000 acres of land absurd. My editors and most readers treated the story as almost a joke. None of the major environmental groups paid any attention,” Cummings said in an obituary that he wrote himself. “My role was to keep the story alive until the legal and political processes could take notice and respond.”

And that persistence paid off. “He returned the land to the people,” said Judy Berk, communications director for the Natural Resources Council of Maine.

“In terms of the effect he had, I can’t think of anything more important that a reporter has done in Maine,” said Lance Tapley, a freelance writer and environmental activist whose work to create the Bigelow Preserve in western Maine was covered by Cummings.

Tapley said when he and other activists climbed Mount Bigelow in the 1970s to symbolically claim the mountain for the people of Maine, Cummings made the winter climb, too.

“He was a low-key, witty and very smart guy,” Tapley said.

Cummings, whom Berk described as “crusty,” wasn’t shy about criticizing his editors when they failed to appreciate the importance of his stories or, in his opinion, handled them poorly.

In his obituary, Cummings remembered one editor complaining about his stories on clear-cutting and overuse of the forests.

“We’ve got woodchips coming out of our ears,” he recalled the editor saying.

Tom Ferriter, a former Press Herald and Maine Sunday Telegram editor who oversaw much of Cummings’ work at the papers, said their relationship was often contentious, but he had enormous respect for Cummings’ work.

“Bob was a cranky cuss who held a healthy mistrust of editors, including me,” Ferriter said in an email Saturday. “He would sometimes write blistering complaints about the editing of his stories. I remember numerous Tuesday mornings after one of Bob’s stories appeared in the Sunday Telegram when I would find a memo from Bob seething with contempt for the way his story was handled.”

‘WORK OF A HIGH CALIBER’

But Cummings cooled off, Ferriter said, shrugging off the memo when Ferriter approached him to discuss it.

“Bob’s knowledge of the Maine outdoors was vast, and his love of the woods was deep,” Ferriter said, adding that his work covered threats to the state woodlands, clear-cutting and other topics.

“But my favorite Bob Cummings’ stories were his accounts of hiking the state’s mountain trails and camping in the woods. Bob was never reluctant to take a hike and recount for our readers what he saw and experienced. He brought back detailed descriptions of his adventures, which he tackled in all seasons, in all weather – even in subzero temperatures in the dead of winter,” Ferriter said.

Lou Ureneck, the former executive editor of the Portland Press Herald and Maine Sunday Telegram, said Cummings was a pioneer in environmental reporting in Maine.

“He practiced a plain-spoken and just-the-facts journalism that enlightened Maine people about a range of crucial issues from the dangers of a mono-culture forest to the development threats in Maine’s wild lands,” Ureneck said in an email Saturday.

“His greatest triumph was bringing Maine’s public lots to the public’s attention. This was land in the hands of paper companies that actually belonged to the people of Maine, and Maine people now have access to thousands of acres of public property as a result of his work. It was investigative work of a high caliber,” Ureneck said. “Bob was also a hiker, hunter, fisherman, sea-weed gatherer and wood-splitter, and his love of the outdoors – of Maine’s natural beauty and resources – stood behind his monumental body of work.”

Cummings was a member of the Phippsburg Board of Selectmen from 1980 to 1991 and said in his obituary that he helped the small town enter the computer age in the early 1980s. Using a rudimentary Kaypro computer – which he had bought for his children for Christmas – he computerized the town’s tax rolls and later developed a tax assessing program.

In addition, Cummings helped found the Phippsburg Land Trust in 1974 and served as its president for many years. The trust eventually preserved 800 acres in the town. At the time of his death, Cummings was still serving, as a member of the Phippsburg Town Lands Management Committee, the Shellfish Conservation Commission and the land trust.

He also served for several years as newsletter editor and Conservation Committee chairman of the Maine Chapter of the Appalachian Mountain Club.

In 1993, two years after retiring, Cummings wrote, he found himself bored, despite all his town activities.

He told his family he was going to Georgia “and would walk home.” He took the train to Georgia and hiked the Appalachian Trail back to Maine in six months. Cummings wrote that he walked “most of” the trail, and Mary Ellen Cummings said he wasn’t one to stick to a route outlined on a map. She said he came off the trail only twice, once to deal with a leg injury and another time for a wedding.

Cummings won numerous journalism awards and was named journalist of the year in 1978 by the Maine Press Association. He was twice nominated for the Pulitzer Prize and in 2015 was awarded the Conservation Award for Lifetime Achievement by the Natural Resources Council of Maine.

“Bob Cummings is the consummate conservationist, and the people of Maine have been the beneficiaries for decades and will continue to be for generations to come,” NRCM Executive Director Lisa Pohlmann said in announcing the award.

Cummings grew up in Bath and graduated from Morse High School. After a stint as an electrician, he graduated from the University of Illinois School of Journalism.

In addition to his wife, he leaves three children – Brenda, Charles and Stephen, all of Maine.