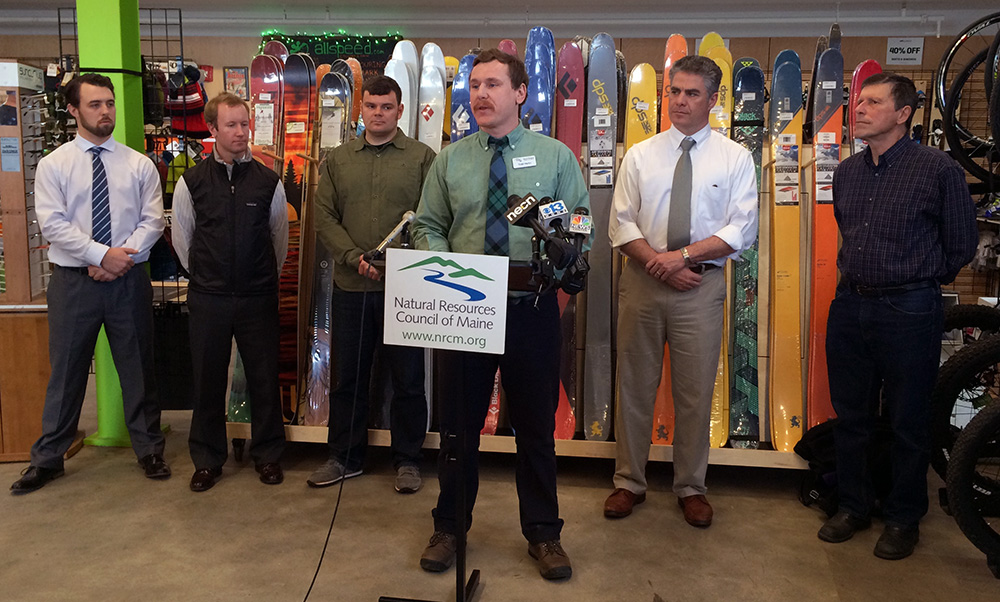 Today, at Allspeed Cyclery & Snow’s store in Portland, Mayor Ethan Strimling, outdoorsman George Smith, pro skier Ben Leone, and conservationist Garrison Beck joined with co-owner Chris Carleton and Todd Martin of the Natural Resources Council of Maine to focus on the impacts of the long list of winter outdoor activities that were cancelled this year due to the extremely warm weather and resulting lack of snow and ice throughout Maine.

The National Oceanic and Atmospheric Administration (NOAA) announced that the lower 48 states had their warmest winter in 121 years of record-keeping, with average U.S. temperatures nearly five degrees above the 20th century average. NASA says Earth just experienced the warmest February on record, and Portland saw its second warmest February on record, with temperatures setting a new record high on March 9.

Speakers described a long list of outdoor events that were cancelled this winter due to lack of snow and ice. They also spoke of the cultural and economic implications of losing these winter events as well as the compelling need for climate action. Most importantly, the Environmental Protection Agency’s (EPA) Clean Power Plan sets the first limits ever on carbon pollution from power plants, which is the federal government’s first critical step toward addressing climate-changing pollution. Power plants are the nation’s largest source of this pollution, generating 40% nationwide. The plan is constantly under attack in Congress and is currently delayed by a “stay” from the Supreme Court.

“As a backcountry-focused winter sport retailer, we definitely felt the effects of the warm and nearly snowless winter,” says Chris Carleton, co-owner of Allspeed Cyclery & Snow in Portland.  “Although the ski resorts were open this year, conditions were never good and backcountry skiing not an option due to lack of snow.  After last year’s deep snowfall totals, our winter sport-related sales were off to a good start but nearly came to a standstill after Christmas.  Overall, we had to discount products earlier than normal and had to offer bigger discounts to entice customers in order to make sales. We cannot run a sustainable business with warm, snowless winters like this.”

“This year’s warm weather was devastating to Maine’s outdoor industry, like sporting camp owners and other small businesses in rural areas that rely on winter recreation to get them through the year,” says George Smith, former executive director of the Sportsman’s Alliance of Maine, and columnist for The Maine Sportsman. “I have to wonder, will we even have winter skiing, skating, ice fishing, and snowshoeing anymore if this continues? I hate to think we will lose this important part of our way of life in Maine.” (Read George’s full statement here.)

“As a backcountry skier, natural snow is everything. This past winter’s weather offers a startling glimpse of what climate change coupled with El Nino can do to Northeast winter as we know it,” says Ben Leoni, a professional skier. “Over the last several years, I’ve been fortunate enough to film and shoot backcountry photos in the mountains of New England.  This year, my backcountry ski days have been cut to 25 percent, and I was never able to film. If we can no longer rely on a snowy winter here, winter sports enthusiasts like me will have to look elsewhere.”

“This most recent, tremendously temperate winter has stunted the winter activity we normally see at our premier recreation venue, the Hidden Valley Nature Center in Jefferson,” says Garrison Beck, Watershed Protection Specialist for the Midcoast Conservancy, a Wiscasset-based nonprofit focused on land and water conservation. “Along with a host of normal programming cancellations, the 5th Annual Liberal Cup Biathlon, an event that brings more than 300 people, was first postponed and eventually cancelled due to lack of snow.”