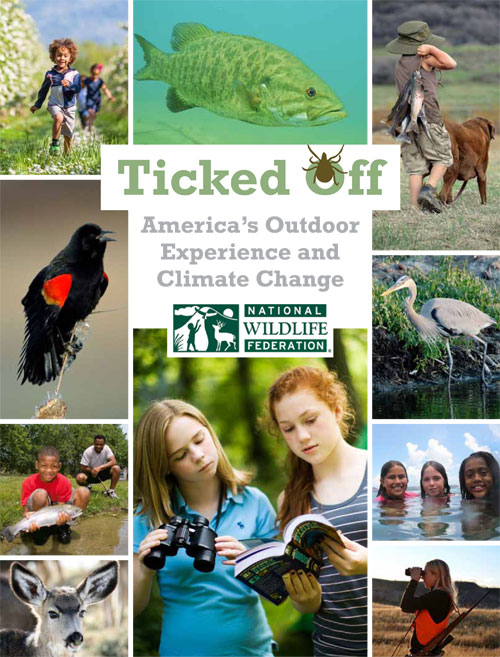 Augusta, MAINE, May 27, 2015 – Climate change is creating favorable conditions for many bothersome pests, including ticks, and is increasing their numbers and expanding their ranges, according to a report highlighted in Augusta today by health,  policy, and wildlife professionals. The report, Ticked Off: The Outdoor Experience and Climate Change, which was written by the National Wildlife Federation, explains how manmade climate change has brought about stressful new changes for the outdoor world. Citing the best available science, the report goes on to explain how climate change is already increasing numbers and expanding ranges of annoying pests and plants, making the outdoor experience less enjoyable and putting the health of people and wildlife at increased risk.

“Maine’s warming temperatures and plenty of moisture, including snow cover, plus our success with managing and increasing the deer herd, have led to the increase and expansion of the deer tick in our state,” said Jim Dill, state senator and pest management specialist with the University of Maine Cooperative Extension.

“With 25 years of data, the Vector Lab at Maine Med has observed that deer tick abundance is associated with warmer winters and wetter summers,” said Susan Elias, Clinical Research Associate at the Maine Medical Center Vector-borne Disease Laboratory. “Even though last winter was cold and long, the deep snow may have acted as an insulator for ticks. Over the past two decades, we’ve seen a trend in warmer winters, and warmer summers with more rain. By 2050, southern Maine is predicted to feel more like Massachusetts, and northern Maine and central Maine are going to feel more like our current southern Maine. That means that deer ticks will be able to complete their life cycle statewide, which means we’ll see more ticks, especially up north.”

“Growing up in Maine we never even thought about ticks…they didn’t exist,” says Bill Houston, Master Maine Guide and National Wildlife Federation Board Member. “But last winter, we saw significant moose mortality from winter ticks here in Maine. Last year, there were nearly 1,400 reported cases of Lyme disease in Maine, with more cases expected this year. Now we need to think about ticks every time we head outdoors and, more importantly, we all need to act to reduce the accelerated climate change that brought so many ticks to Maine in the first place.”

“We all know that ticks are killing our moose, yet another sign that climate change is already having a very negative impact,” said George Smith, outdoor writer and former executive director of the Sportsman’s Alliance of Maine. “I know several hunters who have given up turkey hunting because they can’t stand the ticks.”

Ticked Off describes how shorter winters, warmer summers, and more severe weather conditions all contribute to the abundance of outdoor pests. These pests can transmit diseases to people and pets, threatening people’s health and outdoor experiences. Proper action is critical to avoid larger increases in outdoor pests and plants.

“Lyme disease and related tick-borne infections affect more and more people every year. It is conservatively estimated that 10-20% of those infected go on to have long-term health issues,” says Beatrice Szantyr, MD, FAAP. “Here in Maine, we have seen a consistently rising number of cases of Lyme, last year reaching nearly 1,400 cases. That’s 10 times the national average. We know this is the tip of the iceberg. Cases of anaplasmosis continue to rise as do cases of babesiosis. Intelligent, responsible, carefully considered attention to the role of climate change on these problems, and our roles in attending to these impacts, must be part of our planning. Our health depends on it.”

“Nothing in my life could have prepared me for the experience of suffering the debilitating and devastating effects of Late Stage Lyme disease,” said Cheryl Farley, a chronic Lyme disease sufferer and facilitator of an Augusta-area Lyme disease patient support group. “It robbed me, my husband and family of several years of time and resources that cannot be replaced. Multiply this by thousands suffering in our state and you see what is in my opinion a catastrophe.”

Climate change is bringing stressful new changes to the outdoor world, and without proper actions, conditions will only worsen. Congress and government at all levels are strongly encouraged to reduce carbon pollution, move to less-polluting cleaner fuels and energy sources, increase energy efficiency, and support the proposed carbon pollution limits by the U.S. Environmental Protection Agency (EPA).

“The time to act on climate change is now if we hope to avoid the rapid expansion of pests in Maine and preserve the outdoor activities we love,” said Todd Martin, Outreach Coordinator for the Natural Resources Council of Maine. “The Environmental Protection Agency’s proposed Clean Power Plan would slash CO2 emissions from domestic power plants, our nation’s single largest source of carbon dioxide. It is a great first step and we urge Maine Senators Collins and King to do all they can in Washington, D.C. to see that the plan is adopted and implemented swiftly.”

Ticked Off outlines the key steps needed to stem climate change and save the outdoor experience:

Get more facts about ticks here.

The Natural Resources Council of Maine is the leading nonprofit membership organization working statewide for clean air and water; healthy people, wildlife and forests; and clean energy solutions. NRCM harnesses the power of science, the law, and the voices of more than 16,000 supporters to protect the nature of Maine.