Portland on Track to Be a “Top Tier” Sustainable City 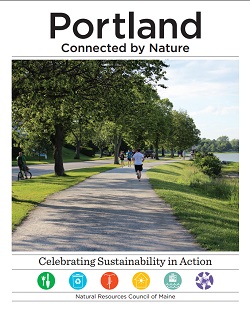 New Report Profiles the People and Organizations Making It Happen

Portland, ME—Portland is making great strides in promoting local foods, minimizing waste, using clean energy efficiently, connecting people with nature, and incorporating environmental sustainability into daily life. According to a new report released today by the Natural Resources Council of Maine (NRCM), dozens of organizations and businesses, and countless individuals, are demonstrating leadership through efforts that are reducing the environmental impacts of the city and its residents.

The first of its kind report, Portland—Connected by Nature, was released at an affordable housing development at 409 Cumberland Avenue that has become a model example of healthy living and environmental design.

Described as a “celebration of sustainability in action”—the report profiles 50 individuals and organizations that are working on inspirational sustainability initiatives in Portland. “At a time of political gridlock at the federal and state levels, the people of Portland are making great things happen at the local and personal levels,” said NRCM Advocacy Director Pete Didisheim.  “People want to be part of the solution to our energy and environmental challenges, so they’re taking matters into their own hands here in Portland and getting things done. And that’s worth celebrating.”

As Maine’s largest and most-visited city, Portland is demonstrating how sustainability initiatives contribute to the quality of life of city residents, strengthen the local economy, and reduce environmental impacts.

“Across the nation and around the world, there is growing awareness that actions are needed in cities and towns to reduce carbon pollution, protect water quality, promote local food systems, improve transportation systems, reduce waste, and adopt clean energy,” said NRCM Sustainable Maine Project Director, Sarah Lakeman. “We’re delighted that Portland is leading the way in Maine in translating sustainability awareness into action.”

The report was released at a mixed-income affordable housing unit, developed by Avesta Housing, at 409 Cumberland Avenue, Portland. The building features a rooftop garden and greenhouse, and programs for tenants focused on gardening and cooking with local foods. Avesta Housing has been a leader in developing affordable housing that incorporates high levels of energy efficiency and environmental design.

Speaking at today’s news conference, Dana Totman, President and CEO of Avesta Housing said, “We’re hearing good things from residents in our environmentally designed buildings on Cumberland, Oak, and Pearl Streets, and we’ve also hosted delegations of out-of-state professionals interested in seeing these buildings. It’s clear that healthy living and environmentally conscious housing design go hand-in-hand, and we’re pleased that we’ve had the opportunity to work with the city and groups like Cultivating Community to get these projects done.”

Craig Lapine, Executive Director of Cultivating Community, said, “The past decade has been an exciting time to be part of the rapidly growing local foods movement in Portland. We’re teaching, training, growing, and harvesting at a faster pace than ever before, involving a large and growing network of people in ecological food production. We’re especially pleased to be helping former refugees, other immigrants, teens, and community gardeners develop agricultural skills that can serve them for life.”

Cathy Ramsdell, Executive Director and Casco Baykeeper Pro Tem for Friends of Casco Bay, said, “We’ve seen great progress in Casco Bay since the years when sailing magazines advised boaters to avoid Casco Bay because the water was too foul. Now the bay is a vibrant and vital part of Maine’s recreational, fishing, and tourism industries. This would never have happened without the help of thousands of people who are taking actions to reduce pollution to the ay. We have many challenges ahead, but we’ve come a long way.”

Brett Richardson, General Manager of We Compost It!, said, “Portland is on the cutting edge of organic waste recycling in Maine, and we’re delighted to be part of it. Restaurants, businesses, institutions and residents recognize that food scraps have value and shouldn’t just be thrown away to end up in a landfill or incinerator. So far, we’ve converted 10,000 tons of food scraps to Maine Organic Farmers and Gardeners Association-endorsed organic compost, collecting from 18 towns—but Portland is by far our largest source, and we’re pleased by their leadership in proving that large-scale composting is viable in Maine.”

Nancy Grant, Executive Director of the Bicycle Coalition of Maine, said, “Portland is the most bikeable and walkable city in Maine. Hundreds of young people move to Portland each year because they know they won’t need a car here. Baby-boomers are moving in from the suburbs so they can enjoy the walkability. The Bicycle Coalition moved its office here a couple of years ago so that we could support and enjoy the bike-friendly culture. The amount of bicycle infrastructure—including bike lanes, shared use lanes, bike racks, and multi-use paths—continues to increase and that encourages more bike commuters. These trends contribute to a healthier community and environment. We hope Portland can become the most bike-friendly city in New England.”

The report includes details about sustainability initiatives in Portland in each of the five areas of the report, including:

Local Foods
The Portland Farmers Markets feature food from more than 40 Maine farms, the Portland Food Co-Op sells items from more than 250 local producers, and local food purchases by Portland public schools have increased from 23 percent a few years ago to around 40 percent today, with a goal of reaching 50 percent in 2016.

Waste Not
Portland has increased recycling by more than 300 percent since 1998, and reduced waste by more than 60 percent. The city was the first in Maine to adopt an ordinance to reduce single-use packaging, and now many other communities have followed Portland’s lead.

Livable Community
Portland now has 70 miles of trails and 1,500 acres of parks, a high percentage of Portland’s METRO and school buses use compressed natural gas for fuel, and Portland now has a growing network of pedestrian and bicycle-friendly transportation routes that help make it a livable city.

Positive Energy
Since 2010, Portland has made energy-efficiency investments in public buildings that have reduced energy costs by 30 percent and cut climate-disrupting pollution by 16 percent. Portland has many buildings that achieve the highest levels of energy performance, including net zero energy homes and a new building at the Jetport that is one of the most energy-efficient airport facilities in the nation.

Sea Change
Water quality has greatly improved in Casco Bay as pollution sources have been identified and controlled, yet the waters face continued threats as a result of climate change. The Gulf of Maine has been warming faster than 99 percent of the global oceans, and Portland has world class scientists, planners, and educators who are studying how climate change may affect the water quality, ecology, and economy of the waters off Portland’s shores.

Copies of Portland—Connected by Nature are available through the NRCM website at www.nrcm.org.