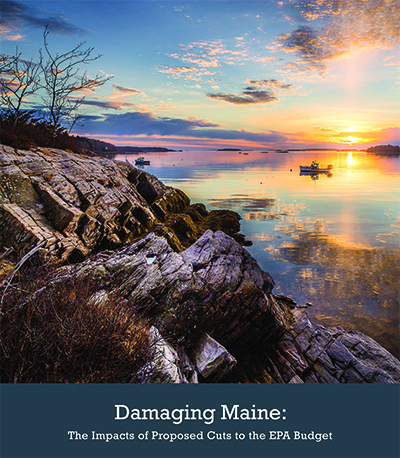 Augusta, Maine – The Trump Administration has proposed deep cuts to Environmental Protection Agency (EPA) programs that reduce pollution in Maine, save the lives of Maine people, and strengthen our communities and economy. According to a comprehensive new report by the Natural Resources Council of Maine, the Administration’s unprecedented proposed cuts to EPA would cause widespread harm to efforts to protect clean air and clean water, achieve economic redevelopment at shuttered paper mills, and protect Maine people from toxic hazards.

“These cuts would cause serious harm nationwide and would be particularly damaging for states like Maine where our environment and economy are tightly intertwined,” says NRCM Advocacy Director Pete Didisheim.

The Trump Administration’s Fiscal Year 2018 Budget singles out EPA for the deepest cuts of any federal agency, cutting its budget by $2.6 billion (31%) and its staff by 3,200 (21%), and completely eliminating more than 50 EPA programs. The proposed EPA budget, adjusted for inflation, would be cut to levels not seen since the 1970s. These radical cuts would be unprecedented in the 47-year history of the agency, and cause crippling reductions to the Maine Department of Environmental Protection (DEP), which depends heavily on EPA funding. DEP received $11.4 million in funding from EPA last year, which paid for nearly 100 staff.

NRCM’s report documents how the proposed EPA budget cuts would damage virtually all aspects of environmental protection in Maine, and would be especially harmful in the following areas:

“If these budget cuts are enacted, DEP will be forced to terminate critical staff across all program areas. But the real consequences will take place across the Maine landscape. Maine’s lakes and other surface waters will be more polluted; communities with brownfield and Superfund sites, including paper mill towns, may never see those sites cleaned up; Maine people will get sick from air and water pollution; and businesses that depend on clean air and water, and on our current climate, will face growing challenges and possible closures.

The impact of these cuts would extend far beyond the DEP and its work. EPA funding to Maine serves as a catalyst that supports countless efforts by towns, nonprofit organizations, businesses, colleges, and citizens who participate in collective efforts to protect Maine’s precious environmental resources. The EPA budget cuts would reverberate across Maine by putting existing partnerships, cooperative agreements, matching funds, and informal collaborations in jeopardy.

Today’s news conference included Mainers who shared their concerns about the EPA cuts:

Samantha Paradis, RN; Staff Nurse and Nurse Educator at Waldo County General Hospital; Adjunct Community Health Nursing Faculty, Husson University “Maine has one of the highest rates of asthma in the country. What may be good for a polluting power plant in Oklahoma is certainly not good for Maine. Trump’s proposed budget is a recipe for more air pollution in Maine, which hurts our health. Increased air pollution leads to more emergency room visits, hospitalization, and premature deaths for those with asthma, other respiratory illnesses, and our seniors. As the tailpipe of the nation, Maine people need a strong EPA to curb pollution from upwind, polluting states.”

David Van Wie, Adjunct Lecturer, University of New England; Former Director, Maine DEP Bureau of Land & Water Quality; Former State Representative (D-New Gloucester) “The proposed EPA cuts would hit the Maine DEP like a wrecking ball, damaging programs and forcing layoffs that would have significant statewide impacts. Protecting the environment doesn’t just happen. It comes about through the work of career professionals like we have at DEP, working with businesses, communities, organizations, and Maine people. These cuts would shatter many of those relationships. That may be the objective in Washington, DC, but it would be bad in Maine.”

Christine Crocker, Executive Director of Maine Indoor Air Quality Council “EPA funding to Maine plays a critical role in helping to make our buildings safer. Indoor air pollutants—including radon—pose significant public health threats. One in three Maine homes has radon at levels above the recommended action limits. Radon is the #1 cause of lung cancer in nonsmokers, and the second leading cause of lung cancer among the general population. Because people now spend 90% of their time indoors, reducing radon is an important priority. Thanks to EPA support, Maine’s Radon Program helps thousands of homeowners and building managers learn how best to address the risks from radon. If funding was eliminated as proposed, this program to help Mainers avoid the risk of lung cancer from radon would cease and our buildings where Maine citizens live, work, play, and learn would be less safe.”

Lidie Robbins, Executive Director, 30 Mile River Watershed Association “We are extremely concerned about possible cuts to EPA programs that help protect Maine’s lakes. It’s important to keep in mind that our lakes are among Maine’s most valuable natural resources. But our lakes are facing significant threats from polluted runoff, development pressures, and climate change. If these EPA cuts are accepted, then our ability to protect Maine lakes would be much more difficult. We certainly hope that Congress provides EPA with the funding that we need here in Maine, and across the nation, to protect our waters.”

Richard Nelson, lobster fisherman, Friendship, Maine; Member of Maine’s Ocean Acidification Commission “Maine’s lobster industry has a long-established heritage of conservation and has made a series of choices that have helped create a fishery that is flourishing while others are not. Our good management decisions of the past could well be an example to our current Administration, who seems to prefer erring on the side of environmental disaster rather than protection. Not only do these issues affect fishermen as businessmen by threatening our livelihood, but serve to kick-in that heritage of conservation within us. We must now reach out beyond our industry to the decision-makers at state and federal levels to help bring about the policies that will enable us to maintain a healthy ocean and the resources we depend upon.”