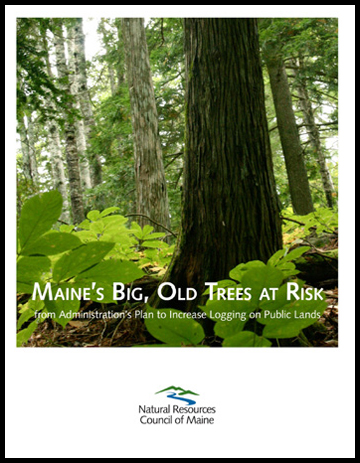 According to a new investigative report issued today by the Natural Resources Council of Maine, the LePage Administration over the past two years privately developed a plan to dramatically increase logging on Maine’s public lands without disclosing the plan to Maine lawmakers or the public and without providing a science-based justification or opportunity for public comment. Internal documents secured by NRCM reveal that the state foresters and land managers responsible for timber management in Maine’s public forests initially were excluded from discussions of the plan, which departs radically from a decades-long state policy to grow bigger, older trees in Maine’s public forests.

The new report, Maine’s Big Old Trees at Risk from Administration’s Plan to Increase Logging on Public Lands, draws from dozens of internal documents secured by NRCM through information requests to the Maine Forest Service and Bureau of Parks and Lands. NRCM also filed a Freedom of Access Act request last November with the Governor’s Office, but has yet to receive any of the requested documents more than four months later.

NRCM believes that the Administration’s plan, which calls for a 27 percent increase in logging, would result in unsustainable overcutting on lands valued for their wildlife habitat, backcountry recreation, and high-quality timber. Approximately 400,000 acres of Maine’s forests, which comprise less than 3 percent of the state’s 17.6 million acres of timber lands, are publicly owned and managed for commercial timber and other public values.

“The State is planning to cut our forests faster than they are growing back, and cut the best trees owned by the people of Maine,” said Cathy Johnson, attorney and North Woods Project Director for the Natural Resources Council of Maine. “Maine’s previous policy was to grow bigger, older trees on public lands, because there are so few places left in northern Maine with anything close to a mature forest with older trees. But the Administration’s plan would be is a complete reversal.”

At 2:00 p.m. Tuesday, March 18, the Maine Bureau of Parks and Lands (BPL) will, for the first time, present to state lawmakers some of the details about the plan for increased logging on public lands. The information will be presented as part of BPL’s Annual Report to the Legislature’s Agriculture, Conservation and Forestry Committee.

Maine’s Big Old Trees at Risk cites a memo dated Oct. 22, 2012, in which the Maine Forest Service proposed to the Governor’s Office that logging on Maine’s public lands should immediately increase by 78 percent over the level of logging that occurred in 2012. The proposed increase to 227,732 cords would be 61 percent above the 2013 scientifically-calculated sustainable harvest level of 141,500 cords/year. The Maine Forest Service made this proposal without consulting the professional foresters at the Bureau of Parks and Lands who are legally responsible for managing the state’s public forests and without any notice to the public.

Maine’s publicly owned forests are extremely important to Maine people and by law they are supposed to provide outstanding recreational opportunities and wildlife habitat for a broad range of species, as well as high-value forest products.

“Maine’s public forests have some of the best mature forest remaining in northern Maine and provide important habitat for those species like pine martens and Black-backed Woodpeckers that need mature forest,” said Johnson.

The NRCM report shows that the state’s policy for managing our public forest lands was radically altered during a 48-hour period in April 2013, upending a three-decades-old policy to increase the amount of standing timber and grow bigger, older, and more valuable trees, and no opportunity for public comment was provided or contemplated by the Administration at the time of this major change, nor since.

Initially the only communications that occurred about the proposed ramp-up in timber harvesting on public lands were between the Maine Forest Service and staff in the Governor’s Office.

Once the officials legally responsible for managing the state’s public forests learned of the plan, the Administration’s plan to overcut was scaled back to 180,000 cords/year, still an increase of 27 percent over previous levels, and still logging public forest lands faster than they are growing back.

“NRCM recommends that the Administration drop its proposal to increase harvesting on public lands to 180,000 cords/year,” said Johnson. “The Bureau of Parks and Lands should determine harvest levels for public lands based on the most recent scientific forest inventory, and seek public comments before any increase in timber harvesting beyond the sustainable harvest level of 141,500 cords/year.”

“This is a clear case of forest management driven by politics, not science,” said Johnson. “The proposed logging levels threaten important wildlife habitat, especially in older forests, and harm wildlife species that need these mature forests. The increased logging would also damage backcountry recreation experiences in Maine by cutting down many older forest stands that make Maine’s public forests so special.”

1. The Administration’s proposed increase in harvesting levels should be rescinded. Instead, the Bureau of Parks and Lands should harvest timber on public lands at a rate no greater than the Sustainable Harvest Level (141,500 cords/year)[1] until a future forest inventory provides information supporting a different, science-based Sustainable Harvest Level.

3. The Bureau of Parks and Lands should provide meaningful opportunities for public comment prior to changes in management or policy for all cases when the Bureau can reasonably assume that there is a significant interest in the proposed change by members of the public.

[1] This level was determined after the most recent (2012) forest inventory.