Today, outside the federal court building in Portland, Maine Attorney General Janet Mills and health and environmental leaders spoke in support of the EPA’s Clean Power Plan, which is being challenged in federal courts by a coalition of polluters and their allies. Today at the U.S. Court of Appeals in Washington, D.C., judges are hearing oral arguments from challengers and supporters of the nation’s comprehensive new limits on climate-changing carbon pollution from power plants, known as the Clean Power Plan (CPP). Attorney General Mills is one of 18 states attorneys general who filed briefs in support of the CPP. 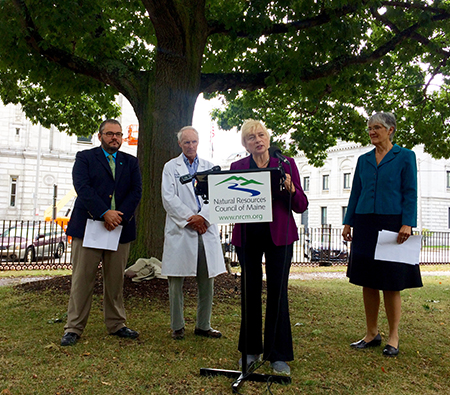 “The Clean Power Plan is a big deal and I’m proud to be defending it in court,” said Attorney General Mills. “It is no understatement to say that this landmark regulation is critical to efforts to curb global climate change and the damage that it is already causing to public health, to our natural resource-based economy, and to our environment generally. Senator Ed Muskie was a true visionary in 1970 when he made the connection between human health and the health of our environment and championed the passage of the Clean Air Act. It almost seems quaint now to imagine that this law was signed by President Richard Nixon. But it shows that environmental protection need not and should not be a partisan issue.”

Emissions from coal-, oil-, and natural gas-fired power plants are responsible for about 40 percent of the carbon pollution in the United States. Carbon pollution is changing our climate, increasing temperatures, generating air pollution, triggering more asthma attacks, and intensifying respiratory disease. It is also leading to warming ocean temperatures, with the Gulf of Maine warming faster than 99% of the world’s oceans, putting seafood species at risk and contributing to more frequent, destructive, and costly extreme weather events. Melting ice caps and glaciers are causing sea levels to rise at alarming rates, threatening shorelines here in Maine and around the world. Climate scientists from the University of Maine and beyond warn that all of these effects will worsen with continued carbon pollution.

The U.S. military has classified climate change as a “threat multiplier” that impedes military readiness, increases instability around the world, and threatens our national security.

“It is increasingly clear to Mainers that our climate is changing and we need to cut carbon pollution to protect what we cherish about Maine,” said Lisa Pohlmann, Executive Director of the Natural Resources Council of Maine. “Maine has taken action and proven that cutting carbon pollution and increasing clean energy can strengthen our economy, create jobs, and lower energy costs. The Clean Power Plan must—and will—move forward so that the rest of the nation can move ahead as we have.”

The Clean Power Plan sets limits on carbon pollution based on proven, cost-effective approaches that utility companies have been using for years to reduce harmful air pollution. The plan also provides states and power companies with extraordinary flexibility in deciding how to meet these limits. The northeastern states from Maine to Maryland will comply easily with the CPP targets because they have already set power plant carbon limits through the Regional Greenhouse Gas Initiative (RGGI). The EPA has explicitly recognized and praised RGGI as a model program.

The Clean Power Plan has a solid legal foundation in the Clean Air Act. On three separate occasions, the U.S. Supreme Court has upheld EPA’s authority and responsibility under the Clean Air Act to protect human health and welfare by limiting carbon pollution.

“Climate change and warming temperatures are closely linked with air pollution and the formation of ozone, or smog, which causes immediate health problems including asthma attacks and even premature death,” said Lance Boucher, Director of Public Policy for Maine and New Hampshire at the American Lung Association. “Reducing carbon pollution may be the single best thing we can do to lessen the health impacts of climate change. The Clean Power Plan gives us the ability to do that and will have substantial public health benefits.”

“There is no question that bad air quality leads to more asthma attacks and other respiratory ailments,” said Dr. Tony Owens, an emergency room physician at Maine Medical Center. “It’s heartbreaking when a serious asthma attack sends a child to the ER, but when that happens we’re so glad that such an option exists. In our health care system, the emergency room serves as a treatment option of last resort. But we don’t have a last resort emergency room for our planet. We must act now to address carbon pollution to protect children and others from the dangers of warming temperatures.”

Many states are moving forward with a transition to clean energy. Some are already preparing state plans to implement the Clean Power Plan as soon as it is upheld by the courts. States in the Northeast are actively working to continue RGGI through 2030, with carbon cuts that exceed those required by the CPP. Ironically, even Arkansas, whose Attorney General joined the polluter-backed lawsuit against the EPA’s Clean Power Plan, has already met its pollution reduction target under the plan, thanks to a market-driven shift to cleaner sources of energy.

Independent economic analysis of RGGI has shown that RGGI has led to more jobs, a more robust economy, and lower energy costs in Maine and the region, demonstrating that carbon reductions can be economically beneficial.

“The lawsuit against the Clean Power Plan is a political attack from polluters and their allies,” said Pohlmann. “This polluter lawsuit is just the latest in a long line of attacks on EPA’s work to implement the Clean Air Act as they are supported to do under the law. The facts are clear: we must act swiftly to protect our climate. Embracing the clean energy transition is a critical way forward that will also strengthen our economy, health, and communities, too.”