Portland, Maine – Today, a broad-based group of business, health, and conservation organizations and individuals announced their opposition to the confirmation of Donald Trump’s nominee for Administrator of the Environmental Protection Agency (EPA), Oklahoma Attorney General Scott Pruitt. The group sent a letter today to Senator Susan Collins, urging her to vote against Pruitt’s confirmation and to make her position known soon when it can influence the debate on this nominee.

“Maine needs an EPA Administrator who will work to protect the clean air and clean water that are so vital to our economy, health, and quality of life. Mr. Pruitt, however, is hostile toward EPA’s mission and is determined to weaken the nation’s most important environmental laws,” reads the letter. 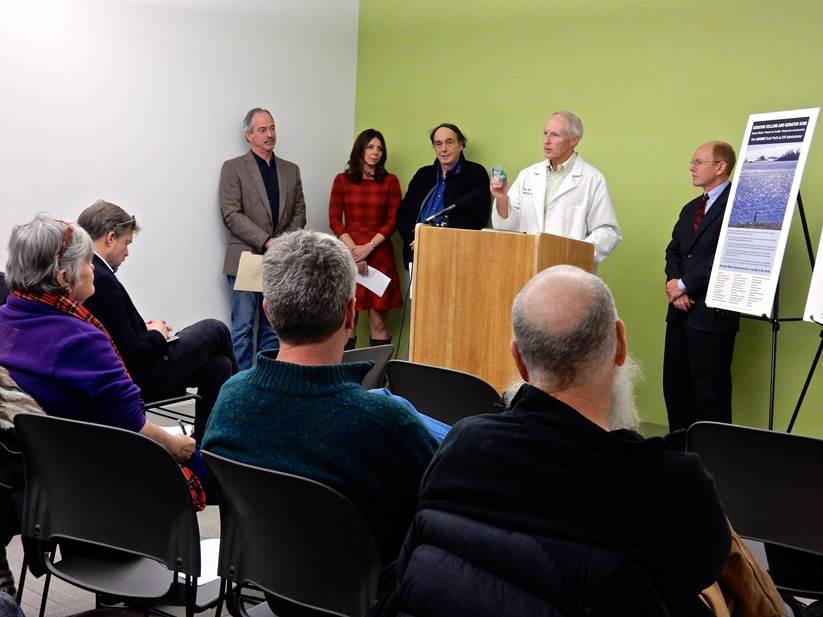 Speakers at a news conference focused on the health risks Maine people would face if Scott Pruitt were confirmed, his deep connections with the fossil fuel industry, his skepticism of climate change, and his relentless lawsuits and legal actions aimed at damaging EPA—demonstrating his lack of commitment to the mission of this vital agency.

The letter states, “Maine policymakers have long recognized that upwind polluters threaten the lives of Maine people, especially children and the elderly, and those with asthma and respiratory difficulties. That’s why Maine’s elected officials, including you, have shown important, consistent, and deeply appreciated leadership in defending EPA’s authority to reduce pollutants. As Oklahoma’s Attorney General, Mr. Pruitt has pursued the opposite agenda. While Maine has worked to restrict ozone pollution, Mr. Pruitt has sued EPA to block implementation of the Ozone Rule.”

Mr. Pruitt’s confirmation hearing was held yesterday, the same day NASA scientists announced that the Earth’s temperature was the hottest in recorded history due to the effects of fossil fuel emissions in warming the planet. As reported on the front page of today’s New York Times: “Temperatures are heading toward levels that many experts believe will pose a profound threat to both the natural world and human civilization.”

The letter to Senator Collins goes on to say: “Mr. Pruitt’s denial of the science of climate change is deeply troubling, and should be disqualifying for the position of EPA Administrator.”

In contrast, Senator Collins has said that “climate change is the most significant environmental challenge facing our country and planet,” while Senator Angus King has said, “Climate change is the greatest environmental challenge I have seen in my lifetime, and I believe it is absolutely essential that the federal government, particularly the EPA, is committed to doing something about it.”

Maine organizations opposed to Mr. Pruitt also made their case today in full-page advertisements in in the Portland Press Herald and Bangor Daily News. These ads pointed out that:

• Pruitt has repeatedly sued the EPA to block clean air and clean water standards that protect the health of Maine people and all Americans.

• Pruitt worked to prevent EPA from stopping mercury pollution that comes to Maine from power plants in upwind states. Maine’s fish and wildlife have the highest levels of mercury contamination in the nation.

• Pruitt received more than $300,000 in dirty fossil fuel industry donations and is beholden to their interests—not the interests of Maine people.

Top scientists in Maine also are alarmed by President-elect Donald Trump’s nomination of Scott Pruitt for EPA. The group letter to Senator Collins also was signed by 30 individuals, including leading experts on the impacts on marine systems already underway due to climate change, warming oceans, and ocean acidification. A separate letter organized by the Union of Concerned Scientists (UCS) was delivered to Senators Collins and King yesterday, signed by 75 scientists, physicians, and research faculty at many of Maine’s top academic institutions. That letter states:

“Scott Pruitt’s past actions subjugating science and public health to the benefit of private industry make him an unacceptable choice to run the EPA, an agency whose mission is to protect our air and water, and the health of all Americans. We strongly urge you to vote ‘nay’ on Scott Pruitt for EPA Administrator and stand up for public health in Maine.”

Pruitt’s nomination hearing was held yesterday, January 18. The full U.S. Senate is expected to vote on whether to confirm Mr. Pruitt as early as next week.