Wind farms accounted for nearly a quarter of the state’s total electricity production in December, thanks in part to the opening of the state’s largest wind farm to date in Bingham.

In December 2016, Maine’s wind farms accounted for nearly a quarter of Maine’s total electricity production, according to data from the federal Energy Information Administration.

The surge in wind power production came in part from the opening of the state’s largest wind farm to date, the 56-turbine Bingham Wind project in Bingham, Mayfield Township and Kingsbury Plantation. A smaller 18-turbine wind farm in Hancock also began generating electricity at the end of 2016.

The charts below show Maine’s total electricity production from wind power (top chart) and wind farm opening dates (bottom chart) for each month since April 2007, when the state’s first wind farm opened on Mars Hill. Mouse over the charts for detailed production data. 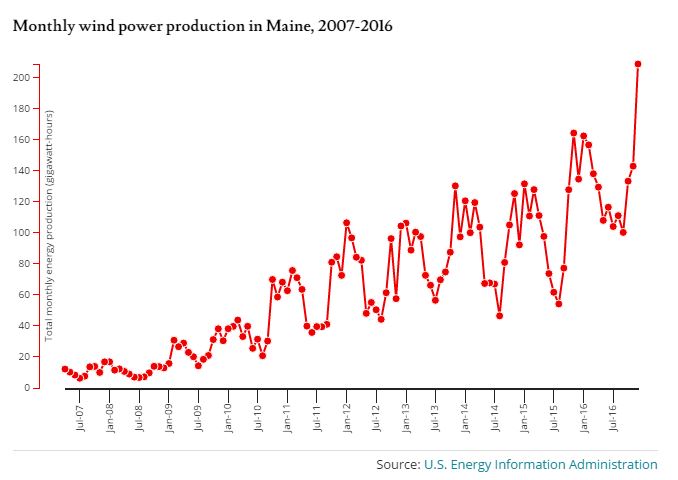 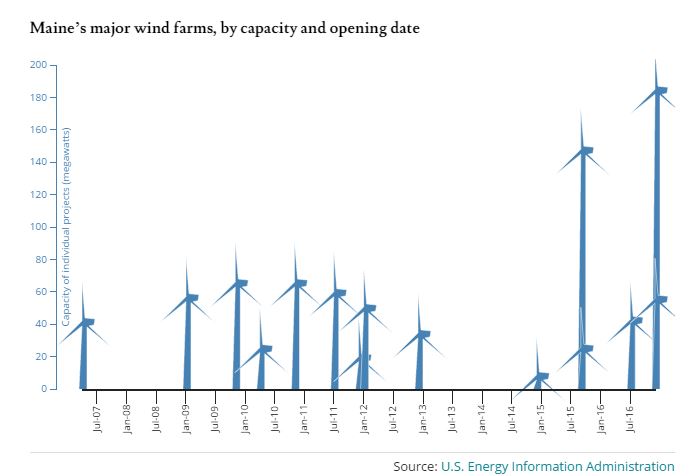 Note: this chart excludes smaller wind farms with a capacity of less than 5 megawatts, such as Fox Island Wind in Vinalhaven. A “megawatt-hour” is the cumulative amount of electricity produced from a 1-megawatt power plant running continuously for one hour. One “gigawatt-hour” is equivalent to 1,000 megawatt-hours, enough to power 300 typical Maine homes for a year.