“Scott Pruitt, President-Elect Trump’s selection to lead the EPA, is an anti-science, anti-environment ideologue. Over the last decade, he has sued the EPA to challenge nearly every major environmental protection, from the landmark Clean Power Plan to rules that protect clean water to standards that protect Americans from smog, haze, methane and more. He has questioned the scientific basis of climate change and the role of fossil fuel emissions. And he has done all of that based on his intimate ties to the fossil fuel industry.

“We need to accelerate federal action to protect our environment and our climate, not reverse direction.

We are counting on Maine Senator Collins and Senator King to reject this terrible nomination. We need leaders in Washington who will stand up for the American people, not fossil fuel interests. Maine’s senators understand the science of climate change is real and know that environmental protections and progress are critical for the health of Maine people and our economy, which are inextricably linked.” 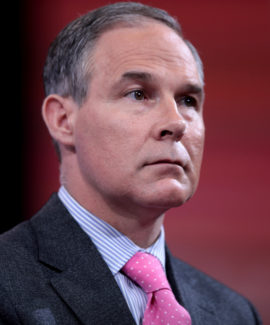 Pruitt joined the multi-state lawsuit against the EPA’s Clean Power Plan. Pruitt has called the rule “unlawful and overreaching” and said the CPP “will shutter coal-fired power plants, and significantly increase the price of electricity for American consumers.” Tulsa World, 5/21/16

Pruitt has questioned the science of climate change, stating “Scientists continue to disagree about the degree and extent of global warming and its connection to the actions of mankind.” Tulsa World, 5/21/16

As a state official, Pruitt sent letters to the EPA that were actually written by oil and gas companies . According to the New York Times: “The letter to the Environmental Protection Agency from Attorney General Scott Pruitt of Oklahoma carried a blunt accusation: Federal regulators were grossly overestimating the amount of air pollution caused by energy companies drilling new natural gas wells in his state. But Mr. Pruitt left out one critical point. The three-page letter was written by lawyers for Devon Energy, one of Oklahoma’s biggest oil and gas companies, and was delivered to him by Devon’s chief of lobbying. ‘Outstanding!’ William F. Whitsitt, who at the time directed government relations at the company, said in a note to Mr. Pruitt’s office. The attorney general’s staff had taken Devon’s draft, copied it onto state government stationery with only a few word changes, and sent it to Washington with the attorney general’s signature.” New York Times, 12/6/14