Hallowell, ME – Today, at a public hearing by the Maine Public Utilities Commission (PUC), a large crowd of Maine residents, business owners, community leaders, and others gathered to oppose the agency’s proposal to roll back solar power rules called “net metering.”

The hearing addressed the PUC proposal to phase out net metering, the simple mechanism that makes solar affordable for Maine people and businesses by crediting them for excess electricity they provide to the grid. Those gathered criticized the PUC proposal as extreme, unfair, and likely even illegal. Many speakers called on the Legislature to adopt a pro-solar, pro-jobs policy to get Maine of its current last-place standing in the Northeast. 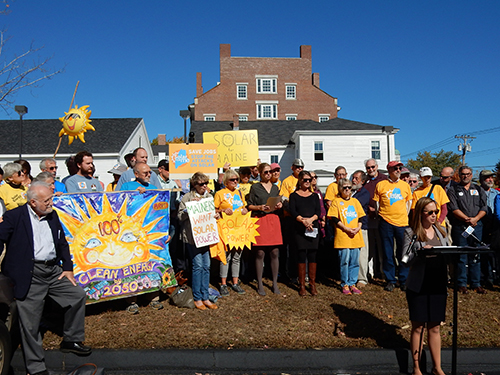 Maine citizens gathered before the PUC hearing to voice their opposition to agency’s proposal to roll back solar power rules called “net metering.”

The PUC has proposed new fees on the power that solar customers don’t export to the grid but instead use right at their home or business and, over time, to cut the 1-to-1 bill credit for solar production by more than 50 percent. This would make it less affordable to install solar panels and decrease the amount of solar that will be installed in Maine in coming years.

“The PUC failed to do its job, which was to properly review net metering, and ignored evidence from its own study about the benefits and cost-savings solar brings to everyone in Maine who pays an electric bill,” said Vaughan Woodruff, owner of Insource Renewables in Pittsfield. “As a result, the proposed rule change would not only take Maine in the wrong direction on solar, but it would also mean higher electric bills for Maine ratepayers.”

While solar power is enjoying enormous growth and feeding rapid job creation across the Northeast and beyond, Maine remains in last place regionally on solar installations and jobs, due to the lack of effective state policy.

“Dairy farming and dairy processing is an energy-intensive business, and managing our energy costs is important to our bottom line,” said Caitlin Frame, co-owner of The Milkhouse in Monmouth. “Because of this, and our commitment to sustainability, this year we began to explore in earnest the possibility of installing solar to substantially reduce our energy costs and give us a more predictable electricity cost for our business to rely on in the long run. Net metering is a critical component of farms like ours going solar.”

During the PUC’s so-called “review” of net metering this summer, approximately 4,400 Maine people and organizations submitted comments or signed petitions asking the PUC to leave net metering intact (or make changes that expand its availability). Those comments came from 315 Maine towns. About 300 commenters/signers in support of net metering were from Aroostook, Piscataquis, Somerset, and Franklin counties. Only one citizen submitted a comment to weaken net metering, and they were joined by Central Maine Power and the Governor’s Energy Office.

A poll conducted by Critical Insights this month shows that a clear majority (62%) of Mainers oppose a rollback or “phase out” of net metering, compared to 25% who support it. Across every demographic and political subgroup, a majority oppose the move by the PUC, including: Republicans (56%), Independents (62%), 2nd Congressional District (59%), those with household income <$50,000 (65%), age 65+ (59%), and others.

According to its own rules, the PUC was required to “review net energy billing to determine whether it should continue or be modified” because solar installations have reached one percent of the power generated in Maine. During this “review” the PUC, a quasi-judicial agency, gathered no evidence and conducted no analysis that was subject to public scrutiny, despite the fact that commenters repeatedly asked the Commission to complete some analysis of net metering before proposing changes.

“The failure of the Public Utilities Commission to do the right thing means it is more important than ever for the Maine Legislature to step up and pass a solar bill next session,” said Dylan Voorhees, Clean Energy Director for the Natural Resources Council of Maine. “Maine people, businesses, and municipalities see solar as an opportunity to lower costs, boost our economy, create jobs, and reduce dependence on dirty fuels. But lack of leadership from too many of our decision-makers leaves Maine in last place regionally in taking advantage of this opportunity.”

“Growing up on a third-generation dairy farm in Albion, I never expected I’d have a job in solar power just down the road in Liberty,” said Holly Noyes, a financial manager at Revision Energy. “I left the state after college so I could pay off my student loans. But I wanted to be back in Maine to get involved with my family’s farm and be a part of the small communities that make Maine a great state. A good job in solar power made that possible. It would be a terrible mistake to risk those jobs instead of taking steps to triple them so other young people like me can live and work here, too.”