I wouldn’t necessarily describe myself as an adventurous person. I refused to join my husband in going to see the new, terrifying (it seems to me!) Stephen King movie, “It.” Don’t look for me at those spooky houses during Halloween. And yet…

I have plunged into the frigid ocean at Portland’s East End Beach not once, not twice, but FIVE TIMES! I have written about a few of them, but now, as we get ready for our 10th Polar Bear Dip & Dash combined with NRCM’s recent acquisition of a GoPro camera, I find myself haunted by my  plunge of 2015, the year  my terror went viral. Let me explain. 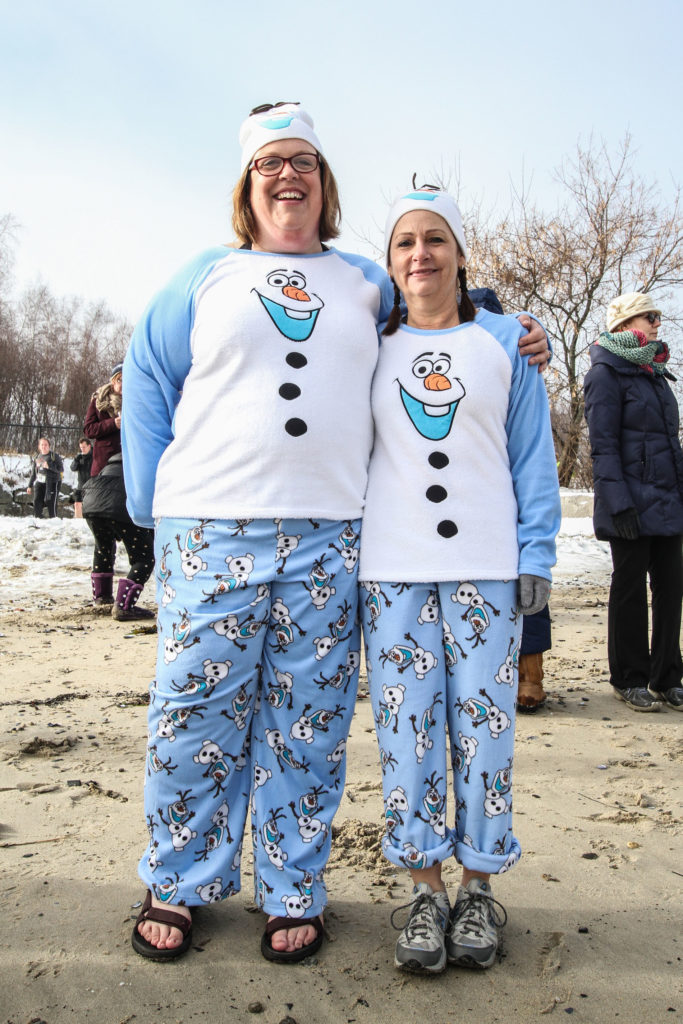 Susan Adams and I getting ready for NRCM’s 2015 Polar Bear Dip & Dash.

My friend Susan had agreed to participate with me in 2012, but coincidentally came down with a bad case of pneumonia the week of the plunge. So, not wanting her to miss out on the fun and comradery, in 2015, I gave her another opportunity to join me. I was delighted when she said yes. First, we worked on our costumes and settled on “Frozen” pajamas and matching Olaf hats (which we ordered at the last minute and drove through a snowstorm to get). We thought “Frozen” was a good theme, and the soft, fuzzy pajamas and winter hat would at least keep us warm while we waited on the beach. Little did I know that while we waited on the beach in our very “media-friendly” outfits that my 15 minutes of fame was waiting on the beach—and in the icy ocean!—with me.

Since I am a member of NRCM’s communications team, I was there to direct local reporters to people who had done the dip before and would be good to interview on camera. I even did a pre-dip interview with WCSH-6 and covered all of the important points: the importance of NRCM’s work reducing climate-changing pollution; the amazing participants; thanks for our fantastic business partners. I didn’t ramble. I smiled and was friendly.

After my interview, I went back to the beach to get ready for the group photo and countdown to the plunge. Then, the reporter who interviewed me for Channel 6 came back and asked me if I would be willing to wear a GoPro camera as I raced into the water. Um……what?

That is what I really said, and I strapped on the camera.

In thinking about it, I should have had the camera facing out so the footage would make it appear as if the viewer was taking the plunge with me. But, for some reason, the camera was facing me, catching my every expression as it aimed from my torso straight up to my face, catching every scream, every grimace, and every look of panic as I entered the sea.

After I got out of the water, I quickly found my sister, who was holding my towel, and had her help me remove the camera. I was sure that the footage would be unusable because of the angle and the short amount of time I was in the water. Yes. I was certain they would use the professional interview I gave them before the dip and that other video of me screaming (picture the “Blair Witch Project” camera angles and you know what I looked like) would be discarded on the editing room floor.

I didn’t give it much more thought as I was spending most of my time and energy thinking about a nice, hot lunch and some warm clothes.

Fast forward a couple of hours as Susan and I are headed back to Augusta, laughing and talking about our silly outfits and how cold the water was. My phone rang as we neared Topsham. It was my sister. She suggested I pull over. She is friends with the Channel 6 digital media guy and he had contacted her with this message: “The video is GOLD!”

“The video is gold!” she repeated, while cackling and trying to contain her glee. When your older sister calls and can’t stop laughing because of something that is about to happen to you…you know that’s not good. Not good at all. 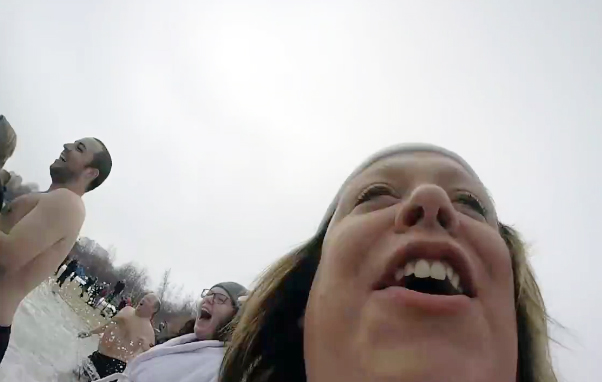 Watch my full video by clicking on the image above.

She said Jeff told her that the video would be on their Facebook page in about 10 minutes. Susan and I sat in the Topsham Fair Mall parking lot and waited.

Then…. about 10 minutes later, there it was. I was afraid to press play. But, I still thought that they might include part of that great interview I did. Even if they posted a little bit of my dip, that’s ok, because I was so composed and professional in my pre-plunge interview.

Susan and I looked at each other, and at this point pressed “play” again as we laughed, tears streaming down our faces. I think we watched the video a half dozen more times, nearly hyperventilating each time I screamed on camera.

That video went viral. It was shared on Newscenter Maine’s Facebook page and then NRCM’s. I shared it, as did my friends and family. As of now, there have been more than 40,000 views of my Olaf hat and me racing into Casco Bay.

As much as the video horrified me at first, I have to admit that I was pretty excited to get so much attention while participating in such a fun, crazy event with my coworkers and friends for such an important cause. I love NRCM’s Polar Bear Dip & Dash and haven’t missed one yet!

I hope you will be there, too, as a walker or runner or dipper or cheerleader on the beach or at the finish line. As we tell people, it’s a great way to end one year and start the new one refreshed and ready! And just think of the bragging rights you will have at your New Year’s Eve parties if you run/walk/dip!

Please join me at the beach and be part of this wildly fun and incredibly important event on Sunday, December 31st. You will be able to find me on the beach. I will be the one without a camera strapped to me. That “video gold” was a once in a lifetime event – but one I will never forget.