Hunting for Birds on the Deboullie Public Reserved Lands

Driving into Deboullie, part of Maine’s Public Reserved Land system, was like entering Oz. As soon as we crossed the line from JD Irving’s hard-cut lands – lots of young trees, clear cuts, and plantations – the canopy closed around us. It was beautiful. My girlfriend Pam and I both laughed at the difference and felt at ease pretty quickly, grateful to be in the well-managed forest common to Public Reserved Lands. We were headed for a few days at Red River Camps, which turns out to be one of the nicest places on earth.  The lodge and cabins sit on Island Pond, a small pond on the east side of Deboullie. It’s a great place to watch the sun rise and the moon set. 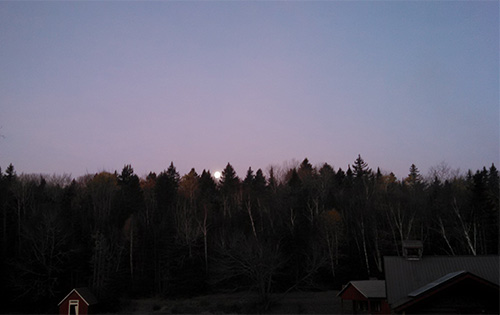 Pam was kind enough to go along on this trip in spite of the fact that I mainly planned to bird hunt. She doesn’t bird hunt, but she is a great walker! “Bird hunting” means hunting for either Ruffed Grouse (often called “partridge,” although technically, they are not partridge) or American Woodcock. It involves lots of walking (and some running) behind dogs that search out the birds.

I have wanted to bird hunt in Aroostook County for quite some time, but I had never done so.  The County has a reputation for being a bird-hunter’s paradise. I imagined epic numbers of partridge and woodcock, perhaps getting my limit of four of the former and three of the latter on each of my two days of hunting. That, of course, didn’t happen. I have never had success like that hunting, but I am always capable of imagining that I will.

On our first day, we hit the logging roads outside of the Township. Bird-hunting lore says that partridge like secondary growth, forest logged in the last 10 or 15 years. That’s been true in my experience. I live near Jamies Pond Wildlife Management Area, which is a beautiful spot with lots of mature forest. I flush an occasional partridge or woodcock there but never lots of them. After eight miles or so of walking the logging roads, though, Pam got a bit tired of that landscape. I guess it was easier for me to ignore the clearcuts and plantations because I was really focused on finding grouse. The only problem was that we only flushed one grouse after walking all those miles! So, we gave up on the logging roads and went walking in Deboullie instead for a couple of hours. 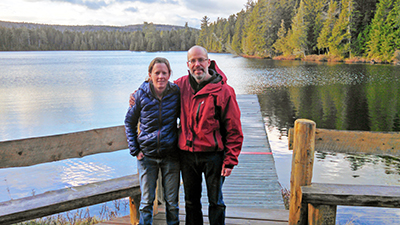 Pam and Nick at Island Pond

The beauty of the remote ponds and the thick woods there made the decision on where to walk our second day a little easier. We walked the main road through the unit instead of the logging roads outside of it. That made us both feel happier, and to my great surprise, we saw more partridge along the roads in the unit than out of it. I got my two partridge for the trip in the much-older (and prettier) forest on the Public Reserved Land unit.

I have a couple of friends who always need a theory for anything about bird or duck hunting. If birds are in a particular place, there must be a discernable reason for it. I don’t really believe this. Only the birds know why they want to be somewhere, and mostly, I think we humans lack the ability to figure this out, at least without a lot of work. The presence or absence of birds strikes me as mostly a random occurrence beyond the large and obvious patterns — ducks fly south in the fall and north in the spring, for example. If we predict the presence or absence of birds accurately on a particular day, though, we remember it forever. If our predictions go wrong, how quickly we forget!

So, I feel a little sheepish coming up with a theory about the presence of more birds in Deboullie than outside of it, but I’ve been around hunters with theories now for long enough that my brain just goes there. The lore says that partridge like logging roads because they are an easy source of gravel for the birds’ crop. It also says they like edge habitat, young forests with lots of regenerating aspen (grouse eat the buds), and nearby conifers to hide in when trouble approaches. But I wonder if maybe a road with mostly older trees along it, such as the road through Deboullie, is more to the birds’ liking. As long as there are plenty of aspen mixed in with conifers, as there are in Deboullie, does it matter if the aspens are on the older side? Maybe partridge like this habitat better than very young growth. Birds are mysterious! 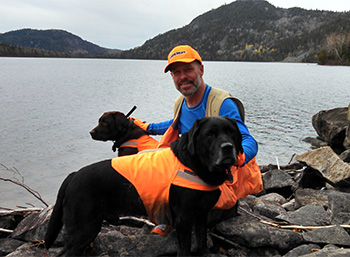 Nick and his dogs at Deboullie Pond

Of course, there are many other factors that could explain seeing more grouse in one place than another, like whether or not my dogs were doing their jobs. My seven-month-old Lab, Thor, certainly wasn’t doing his the day we walked through Deboullie. Thor loves to chase birds, but it doesn’t matter whether the bird is a partridge or a chickadee at this point. He’ll figure this out over time (at least my older dog did), and I don’t like to scold him for chasing after small birds. He won’t catch them, and at this stage of his life, I’m just glad he is interested in finding birds.

As we walked along the road in Deboullie, Thor became obsessed with a tame little bird that fluttered just in front of us. The problem was that it stayed just in front of us for several miles, which meant Thor wasn’t looking for grouse for a couple of hours. Every time Thor chased, the little bird fluttered a couple hundred yards up the road and landed again. Then, it would wait until we got within about 30 feet, Thor would chase, and the bird would take off again. It was a beautiful bird with bright white on its wings and dark black on its body. I didn’t recognize it, but another guest at Red River Camps surmised quickly that it was a Snow Bunting once I described its behavior. I have only seen Snow Buntings in large flocks before, so I checked with bird experts Allison and Jeff Wells when I got back. They confirmed the Snow Bunting identification. So, one bird mystery from our trip is solved, and one mystery remains! 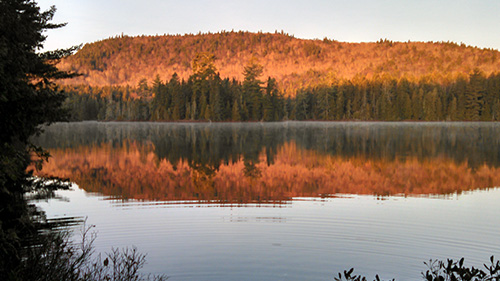 I am certain, though, about a couple of other things after our trip to Deboullie. Red River Camps is a great place to stay. The food was excellent, and the setting on Island Pond is perfect. The owner, Jen Brophy, cares deeply about her camp’s long history and about Maine’s environment. She even offers NRCM members a 10 percent discount!

I can also say with certainty that Maine’s Public Reserved Lands are truly a treasure, and Deboullie is no exception. Deboullie clearly shows the difference between the management philosophies of the Bureau of Parks and Lands (BPL) and Maine’s industrial forest owners. BPL takes a longer view that allows mature forests and all of their benefits in a way other large landowners mostly do not. It’s not an accident that the water quality in the Deboullie ponds is superb and that the beauty of the place is so striking: it’s a result of BPL’s exemplary management. Maine’s Public Reserved Lands include some of the best, largest, and oldest trees in the state. Their stands of big trees are economically valuable and offer some of the best remaining habitat in Maine’s forests for plant, bird, and mammal species that thrive in older forests.

NRCM is committed to protecting this legacy and these lands—our Maine Lands. For more information about Maine’s Public Reserved Lands, visit the Bureau of Parks and Lands’ website and search for recreational opportunities on these lands using their search tool. And consider a trip to Deboullie. You won’t be sorry!