Stop Wasting Food! Have Your Cake, and Eat It, Too.

As a micro-scale farmer who has put a lot of effort into every vegetable, egg and pork chop I sell, I’ve often thought it an unfortunate side effect of life in the land of plenty that most of us don’t really worry about throwing away food. But we need to start.

Food waste may not seem like a sexy issue. In fact, it can be downright disgusting depending on how involved you want to get with the matter. However, I happen to be enamored with the issue of food waste. Why? 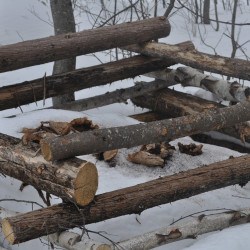 One of several compost piles at Parker Family Farm

First, it’s a huge problem. Second, that means solving it can have huge positive consequences. Third, solving it is relatively simple. Fourth, everyone (well, everyone who eats, anyway) can play a major role. Finally, solving the food waste problem actually solves an incredible array of other problems involving everything from waste stream management to the health of our population and the soil, water, and air upon which every creature depends (yes, that includes us).

According to the Food and Agriculture Organization of the United Nations, every year approximately one-third of the food produced for humans is wasted. One-third! In the United States the statistic is even more startling. The U.S. wastes 40 percent of its food. 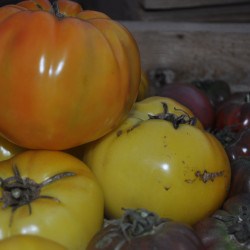 Often with heirloom varieties, the flavor will far outweigh a tiny little blemish.

In developing countries, most food loss happens in the field or on the way to market. In wealthier countries like the U.S., food is not lost, it is wasted. Waste occurs at the other end of the chain and is mostly “plate waste.” In other words, the waste comes from end users at restaurants and in the home. Eaters in countries like the U.S. waste almost as much food as is produced in all of sub-Saharan Africa.

This waste isn’t just limited to the food itself. Many other resources are squandered because of our massive food waste problem. According to the Environmental Protection Agency (EPA), more than 97 percent of food waste ends up in landfills. That’s 33million tons every year. In fact, the total food wasted in the United States in 2010 could have filled the Empire State Building nearly 100 times. When food goes into landfills it is broken down anaerobically, an unnatural process for organic matter that was produced on the Earth’s surface. One of the byproducts of anaerobic digestion is methane, which is more than 20 times as potent as CO2 as a greenhouse gas. Annually, every ton of food wasted results in 3.8 tons of greenhouse gas emissions.

According to the EPA, food waste accounts for more than 13.9 percent of the municipal solid waste stream. I’ve seen higher estimates. New York’s garbage trucks make 250,000 trips through the city each year and an equal number of long trips out of the city. Garbage trucks average three miles per gallon because of idling and frequent stops. Globally, the volume of water used each year to produce all of the food that is wasted is equivalent to three Lake Genevas. According to Kevin Hall at the National Institutes of Health, just a quarter of the food we throw away would feed 43 million people three meals a day or lift the equivalent of almost 1.5 Americas out of hunger (430 million people).

In other words, when we throw away perfectly good food, we waste water, clean air, soil and land, money, and the potential of lots of people who needlessly suffer from hunger.

Most food with blemishes is perfectly fine when you cut off the blemish!

As a farmer, I get pretty riled up about food waste. The idea that a farmer somewhere has put his land, life, sweat, and often blood and tears into producing food that is then thrown away because of a blemish or a bruise offends me professionally. It also offends me morally as a human being on a planet with finite resources, as a dad whose children who will inherit the Earth. About a billion people on Earth are malnourished while, for the first time in history, the number of over-nourished people has surpassed those that are hungry. Our generation faces the most intense, mind-boggling threat the world has ever seen in climate change. Solid waste policy at the municipal, state, and federal level is one of the biggest issues with which we wrestle because everyone assumes we need to generate this much waste and it “has to go somewhere.” This is true at the family level, too. Every year food waste costs the average family nearly $600!

The truth is, tackling the food waste problem in this country, and globally, would make a huge dent in each of the problems outlined above. And there are a lot of ways each and every one of us can make a difference.

First, stop wasting food. Sounds simple, and it is. Buy smaller amounts of perishable items and make smaller portions of everything, including staples and nonperishables. Second, before planning and making a new meal from scratch, consider checking the refrigerator. What’s in there—several half-full containers of meals from the last few days? Eat up. Your fridge space should contain mostly ingredients, not be taken up by meals (unless you have a plan to eat them—and follow through). 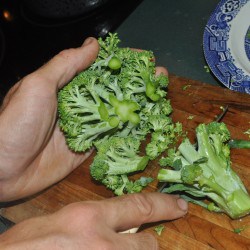 There will always be food scraps such as potato and carrot peels, eggshells, and bones from meat products. First, if we could get our food waste down to those types of items, we would be in amazing shape. But even then, these types of food (like any food, for that matter) do not belong in a trash can or landfill. Food is organic matter. Like other organic matter it needs to break down aerobically. When organic matter breaks down this way it is actually good for the Earth, unlike when it is put into a plastic bag and buried beneath the Earth’s surface. I’m talking about composting. With the technology we have now and the knowledge we have about how composting actually works, everyone, in every location can compost. Everyone, everywhere. Give me an excuse and I’ll give you a solution. 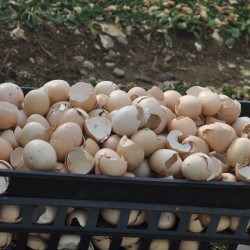 Save your eggshells for the garden. They are nearly 100% calcium.

Better yet, get yourself some chickens. If our ancestors, even those as recent as 100 years ago, were able to appear today, they would laugh themselves silly to learn that our eggs come from chickens that require special, expensive grain. Throughout human history, the production of grains (also known as cereal crops) was so labor-intensive that nobody would ever have thought to feed grains to their livestock. Chickens have evolved from their wild ancestors in the Asian jungles, along with humans, to survive and thrive on the agricultural scraps and food waste we humans generate. In return, they produce eggs, meat, and one of the best sources of fertility for your garden. The “present me with an excuse and I’ll give you a solution” line works nearly as universally for chickens as for compost, though not everywhere because many municipalities and communities have somehow got it into their head that chickens in the back yard are unsightly. Even then you can often find a compromise. 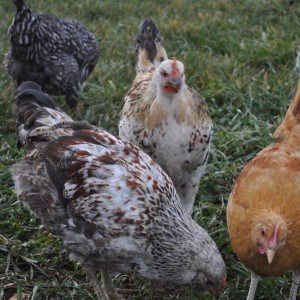 What about before the plate? Shopping at farmer’s markets is a good way to get “damaged” or “blemished” produce for less money. Often, farmers will sell our “seconds” at discounted prices. Frankly, a crooked carrot is perfectly edible and healthy, and a bruised tomato makes the same awesome tomato sauce as a “perfect” tomato.

In the supermarket, ask the management to set up a discount section or to donate produce they currently waste, often thrown out before the expiration date, to soup kitchens. Or you could ask them to simply set up a system for a person or group of people to come and pick it up for distribution. Many supermarkets do this already in Maine, for farmers with pigs or other livestock. No offense to our porcine friends, but the reality is that most of the food supermarkets are giving to farmers for pigs is too good for pigs. 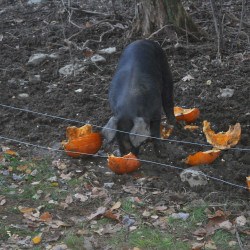 Our pigs eat the pumpkins we didn’t sell by Halloween.

The average restaurant patron leaves, 17 percent of his or her meal on the plate. Bring a container with you and bring it home. Food waste accounts for roughly half of a restaurant’s waste stream. In fact, according to the Green Restaurant Association, a single U.S. restaurant can generate between 25,000 and 75,000 pounds of food waste each year! Most of that is based on our decisions, the eaters, to waste the food on our plates.

At the municipal and state level, we need to get involved and force our leaders to understand the simple economics of food in the waste stream. Food is heavy, bulky, and expensive to transport to landfills. Solid waste is consistently one of the top expenditures in any municipality. A huge amount of this cost could evaporate if cities and towns had ordinances and rules to encourage not only household composting but also urban gardening, compost donation centers, public works departments that use municipal compost, commercial composting, and other regulations aimed at reducing organic matter in the waste stream.

United States Congresswoman Chellie Pingree is looking to begin tackling this problem from the legislative angle. The USDA and EPA have only recently set goals for reducing the amount of food waste in the US. These are great goals and good beginnings. But the problem is massive and will take action by each and every one of us. Luckily, it’s very, very easy for each of us to have a big impact regarding reductions in food waste.

Wasted food is wasted potential—human, environmental, and economic. We are constantly hearing from chemical companies involved in industrial agriculture that we need chemicals and biotechnology to feed the world. The reality is quite different. We already produce more than enough food to feed nearly one and a half times the Earth’s population. We just need to stop throwing so much of it away.