In July of 1999, I attended the breaching of the Edwards Dam on the Kennebec River. There were hundreds of others in attendance including Secretary of the Interior Bruce Babbitt and Pulitzer Prize-winning writer John McPhee, author of Coming Into the Country, The Survival of the Birch Bark Canoe, The Control of Nature, and The Keel of Lake Dickey. There was a clear sense among all present that this was a significant environmental and economic milestone. 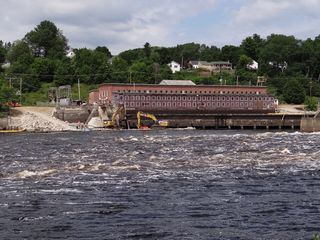 One evening this summer as I was getting ready to sit down for dinner at the summer camp where I work, a group of campers walked in, having just returned from a week spent whitewater paddling on the Penobscot River. Several of them wore t-shirts recognizing the removal of the Veazie Dam, which had taken place earlier in the day. As it turned out, they had just learned of the dam’s impending removal and decided to make a slight detour to be present when it took place. As I spoke with the eight paddlers and their trip leaders, they spoke of feeling that they were watching something historic. Having spent the previous week on the river’s upper reaches, they appreciated its beauty, its power, and its place in Maine’s history.

Following the end of camp, I traveled to Idaho with my family where we spent time on the Middle Fork of the Salmon River. We also hiked and climbed in the Sawtooth Mountains. In Idaho, too, there is a strong debate concerning the fate of the region’s migratory fish runs and an awareness, it seems, that how we address this issue says something about our society. The Penobscot River Restoration Project has been long and challenging. It’s still incomplete, but it is, however, a step that might allow today’s children to experience an incredible natural event, on a stunning river, which was in danger of being lost.

Henry Heyburn is a long-time member of the faculty and coaching staff at Hyde School in Bath and spent this past summer teaching at the Chewonki Foundation. He enjoys blending his love for education with his passion for the outdoors. Henry and lives with family in Brunswick.