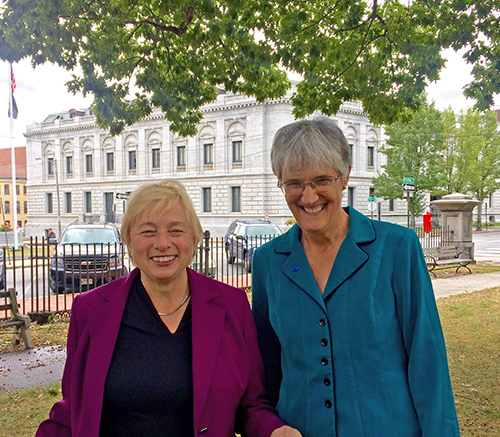 My remarks at today’s news conference about Clean Power Plan litigation in the U.S. Court of Appeals:

Right now, judges at the U.S. Court of Appeals in Washington, DC are hearing oral arguments in a lawsuit brought by polluters and their allies against the EPA’s historic Clean Power Plan. I am proud to be joined today by Maine’s Attorney General who is helping defend the Clean Power Plan against this lawsuit, along with scores of businesses, cities, state attorneys general, public health groups, and others. With so much at stake for the air we breathe and the climate we depend on, Maine can do our part by moving forward with the Clean Power Plan.

Most Mainers are now well past debates about whether climate change is happening. The changes around us are unmistakable: more ticks and Lyme disease; warming ocean waters and invasive species; more extreme weather patterns; more coastal flooding; the list goes on. We have to ask ourselves: What will we do to reduce carbon pollution to avoid more and more catastrophic climate impacts for our kids and grandkids over the coming years?

We’re very proud of the fact that Maine’s Senators, Susan Collins and Angus King, have repeatedly voted in Congress to defend the Clean Power Plan from legislative attacks. Climate change and the Clean Power Plan are not partisan issues in Maine. The need for action is clear, as we experience the rapidly warming waters in the Gulf of Maine or the growing number of Lyme disease cases around the state.

Maine has already experienced the benefits of moving toward low carbon energy. For eight years Maine has been in the Regional Greenhouse Gas Initiative (RGGI), which is how our region has set its own limits on power plant carbon emissions. The results are astonishing: RGGI has created jobs and grow the economy in Maine and the region, while cutting carbon from power plants by more than 30 percent. Because we used revenues from RGGI to invest in weatherization and energy efficiency, we’ve lowered energy costs for manufacturers and thousands of Mainers. The RGGI states continue to refine and update the program periodically. Maine can easily comply with the Clean Power Plan because of RGGI.

But our air and climate in Maine depend on action outside of our state and our region. So it is good news that at least 20 states are moving forward with their own plans to transition to a cleaner, safer economy. These states know that the Clean Power Plan is good for public health, good for the climate, and will create new economic opportunities in communities across the country. Even as polluters and their political allies from other states bring lawsuit after lawsuit to stop the transition to clean energy, these 20 states aren’t waiting around to act on climate—there’s too much at stake.

Arkansas, whose Attorney General joined the polluter-backed lawsuit against the EPA’s Clean Power Plan, has, ironically, already met its pollution reduction target under the Plan, thanks to their market-driven shift to cleaner sources of energy. The fundamentals of clean energy markets have never been better. Energy efficiency lowers costs by reducing energy waste, and wind, solar, and other renewables are now priced competitively with dirty fossil fuels.

The attorneys general suing to block the Clean Power Plan have been fueled by millions of dollars in campaign contributions from polluter interests. But I am confident that the Clean Power Plan is on firm legal footing and will prevail as a course of action for our country, where so many people know we need to take action on climate change now.