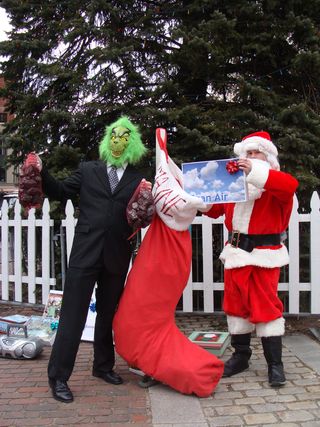 On a recent blustery winter day, I found myself skulking and slinking around Portland’s Monument Square dressed as Dr. Seuss’ the Grinch. Sporting a three-piece, pinstriped suit and hauling bags of dirty coal over my shoulder, I spread holiday fear wherever I went. But why, you ask? I have never considered myself a Grinch by any means, especially during the holiday season. I love all that this time of year offers, especially here in Maine. I enjoy the powdery snow that blankets our rolling hills, skating on frozen ponds, and breathing the crisp, clean air. So why the Grinch outfit, you ask?

I was acting in a fun street theater performance co-sponsored by NRCM applauding new standards that will clean up Maine’s air! Thanks to new standards issued by the EPA regulating air emission of mercury, arsenic, nickel, selenium, and cyanide from the nation’s dirtiest power plants, Mainers can all breathe a bit easier this holiday season! The new Mercury and Air Toxics Standard will slash domestic mercury air emissions by 90 percent by requiring all power plants to utilize existing pollution abatement technology.

To raise awareness about this important new public health safeguard, we pitted the Grinch (think dirty coal-fired power plants) against Santa Claus (think EPA) in a street theater performance. As Santa stuffed Maine’s Christmas stocking with presents representing clean air, safe children, and healthy wildlife, the Grinch tried to put dirty coal in Maine’s stocking. Thanks to the EPA’s new rules, I think we all know how that turned out.

The EPA estimates that the Mercury and Air Toxics Standard will prevent 11,000 premature deaths and 4,700 heart attacks a year in the United States. The standards will also help America’s children grow up healthier – preventing 130,000 cases of childhood asthma symptoms. This is especially good news for Maine which is downwind from so many coal-fired power plants and has one of the highest rates of childhood asthma in the country. This is why Maine has been dubbed the “tailpipe state” of the nation.

Power plants are responsible for half of the mercury and over 75 percent of the acid gas emissions in the United States.  Today, more than half of all domestic coal-fired power plants already utilize pollution control technologies. Once implemented, these new standards will ensure the remaining plants – about 40 percent of all domestic coal-fired power plants – take similar steps to clean up their act. This will save lives, prevent diseases, protect our children’s healthy, and reduce mercury pollution in our lakes, rivers, and streams.

NRCM is pleased that the Obama administration made good on its promise for clean, healthy air this holiday season. We urge Maine Senators Snowe and Collins not to be Grinches and to protect the health of Maine families by voting against all efforts to delay air pollution rules in Congress.