Getting Down to Business on Climate Change

Friday morning, June 6, was a big day for Maine’s growing clean economy. Some 200 Portland-area business and community leaders gathered to celebrate Maine’s climate progress with the decade-old Regional Greenhouse Gas Initiative (RGGI), and now, to celebrate brand-new U.S. EPA carbon pollution standards that ask the rest of the country’s power plants to run as cleanly as ours do under a “RGGI for the rest” proposal. The Natural Resources Council of Maine was pleased to co-host the event with the Portland Regional Chamber of Commerce, featuring Senator Angus King, U.S. EPA Deputy Administrator Bob Perciasepe, economist Charlie Colgan, and four distinguished business panelists who have all signed on to our “Maine Businesses for Climate Action” sign-letter.

Bob Perciasepe, Deputy Administrator of the U.S. Environmental Protection Agency, kicked off the event. Mr. Perciasepe is an expert on environmental stewardship, advocacy, public policy, and national resource and organizational management, and is widely respected within the environmental and U.S. business communities. He congratulated Maine on our impressive progress cutting our power plants’ climate pollution in recent years under the nine-state, market-based Regional Greenhouse Gas Initiative (RGGI, often short-handed to “reggie”). In that time, we’ve invested further in energy efficiency, and all the while growing our economy, even during the 2008 economic downturn. Mr. Perciasepe explained that the carbon rules, which the EPA debuted on Monday, June 2nd, directly follow on the Northeast’s RGGI success, and ask the rest of the country’s power plants to follow our lead.

Distinguished economist Charlie Colgan, Professor of Public Policy and Management and chair of the master’s program in Community Planning & Development at the University of Southern Maine’s Muskie School of Public Service, followed Mr. Perciasepe with an analysis of the impact of these new EPA rules on Maine’s economy. His conclusions were thunderous: climate change severely threatens Maine’s economy, and it’s only fair that the rest of the nation clean up their act as much as we already have. “The proposed EPA rules on greenhouse gas emissions from power plants are important to Maine for three reasons,” Colgan explained. “First, they would reduce Maine’s electricity price disadvantage compared with other parts of the U.S., enhancing our economy’s competitiveness. Second, Maine and New England are very well prepared to meet the new regulations quickly and efficiently because we helped design the model for the national policy. And finally, climate change is a clear and present danger for Maine that needs to be addressed as quickly as possible.” 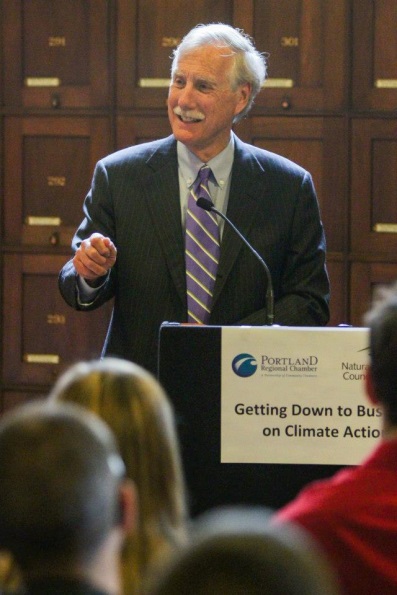 When Senator King next took the podium, he began by listing Charlie Colgan among Maine’s top “natural resources,” right up there with Mt. Katahdin. From there, Sen. King offered a heartfelt and inspirational call to climate action: “Countless scientific reports have sounded the alarm on global warming and right here in Maine we continue to see the impacts every day,” he began. “The facts are simply undeniable: climate change is real, it’s caused by humans, and it poses a significant threat to public health and to our state’s and the nation’s economic livelihood. The health of the world that our children will inherent tomorrow depends on the action we take today. Fortunately, Maine has been a leader in pursuing policies that reduce emissions and generate clean energy and new jobs. With the introduction of the EPA’s new rules, the rest of the nation should take a lesson from Maine and recognize that it’s in the interest of businesses to work toward a cleaner, healthier tomorrow.” Sen. King deserves real credit for his Senate leadership on climate solutions and a cleaner economy.

After his remarks, Senator King introduced a panel of four Maine business and economic leaders, many of the more than 300 signers to NRCM’s “Maine Business for Climate Action” sign-on letter. The group discussed a range of climate and clean energy issues for Maine, from vulnerability of real estate to sea-level rise and more severe storms, to economic opportunities from energy efficiency to development of local clean energy resources like wind and solar. 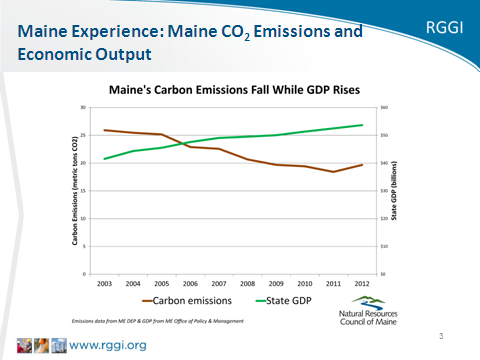 David Littell, Commissioner to the Maine Public Utilities Commission, provided his expertise in RGGI’s history cutting carbon pollution from our electrical grid. He showed how during Maine’s decade in the RGGI market, carbon pollution has decreased as our economy has improved, even in the face of the recent recession. Next, architect Alan Kuniholm explained that “climate change imperils Maine’s economy and culture, wherever you live and whatever you do for a living. “As the easternmost state, with a long and productive coastline, we are particularly vulnerable to carbon pollution. That’s why Maine’s architects are designing for the future and asking the EPA and the rest of the country to help control carbon pollution as we are trying to do here.” Mr. Kuniholm is a Principal at PDT Architects, a member of the board of Maine’s US Green Building Council chapter, President of the Portland Society of Architects, and one of Maine’s first architects to earn LEED accreditation.

Hallie Gilman, Associate General Counsel for First Wind, chimed in next, offering that “Maine has some of the region’s finest renewable energy resources. First Wind is proud of its major investments in Maine to develop clean, renewable wind energy, which is both helping to reduce carbon pollution and provide jobs and other economic benefits for the state. The EPA has taken a commendable step to further cut pollution nationally, and we appreciate the flexibility it is giving states to pursue different strategies, including more renewable energy.”

The event closed with words from an executive from the company that owns Madawaska’s Twin Rivers Paper Company. David Critchfield demonstrated how valuable energy efficiency upgrades have been for the mill, crediting the RGGI market’s proceeds to Efficiency Maine. Mr. Critchfield bore the standard for Tim Lowe, President of Twin Rivers, who said that “Twin Rivers Paper appreciates both the financial support and the important mission that both RGGI and Efficiency Maine stand for. The recent grants enabled the Madawaska mill to install high-efficiency drives to reduce electrical costs and heat exchangers on three paper machines to reduce steam demand. Twin Rivers matched the RGGI funds dollar for dollar. These two projects enabled Madawaska to cut electricity demand by almost six million kilowatt-hours and steam demand by 40,000 pounds per hour during winter months. A clear plus-plus: reduce CO2 emissions and increase competiveness for Maine manufacturers.” 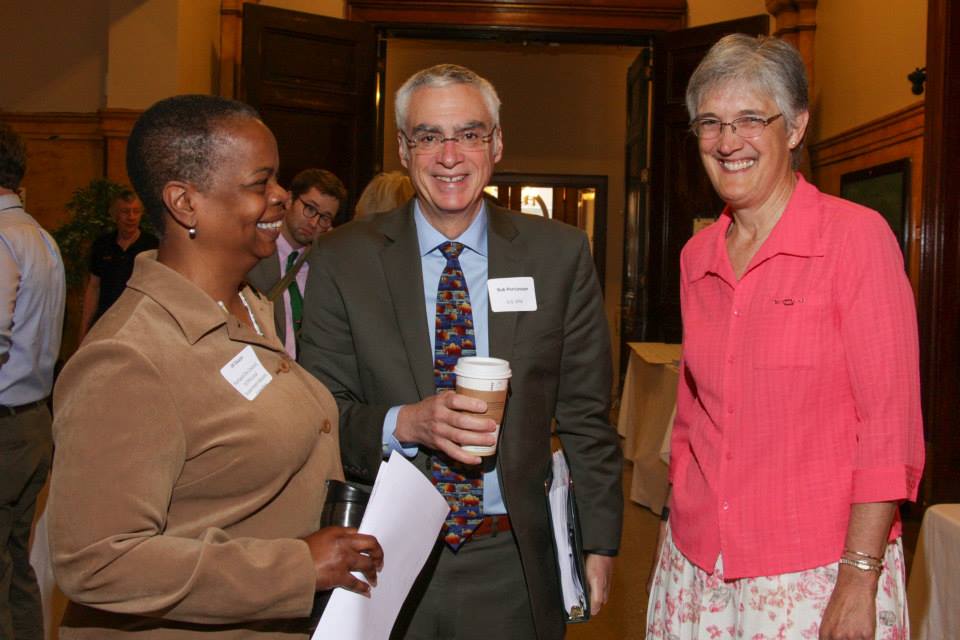 Lisa Pohlmann, Executive Director of the Natural Resources Council of Maine, closed this high-energy event on a congratulatory tone: “Maine and our region have demonstrated significant leadership on climate pollution and clean energy,” she said. “Now is the time for the EPA to move forward with its national standards for power plants, and we hope businesses and elected officials across Maine—including our critically important U.S. Senators—will support this common-sense action that is good for our state, and essential for future generations of Mainers.”

Numerous media outlets picked up the story of the event, including the Bangor Daily News and WCSH Channel 6, and all three of Maine’s statewide papers have now published strong editorials in favor of the EPA carbon rules:
• Lewiston Sun Journal, “Time to Get Serious about Greenhouse Gases”
• Portland Press Herald, “Our View: EPA Rules Would Be Breath of Fresh Air for Maine Residents, Businesses”
• Bangor Daily News, “The EPA Sidestepped Congress with Carbon Emissions Rule? What Hot Air”

The event’s keynotes can all be watched online (Part 1 and Part 2).