One of the favorite parts of my job is attending events hosted by the Natural Resources Council of Maine or other events in which NRCM participates, like our annual table at the Common Ground Country Fair in Unity, coming up in September. I get to meet members and supporters in a variety of settings to talk about our work, how they became involved with NRCM, and what interests them most about Maine’s environment.

Last month, NRCM hosted our annual Allagash Awards evening at the Boathouse in Belfast. Allagash Awards are presented to members who have maintained financial support of our organization for 20 years or more. At this year’s event I met Dwight and Kay Gagnon from Benton. When I was introduced to them, I found out that Dwight is the artist whose work is featured on this year’s Common Ground Country Fair poster. 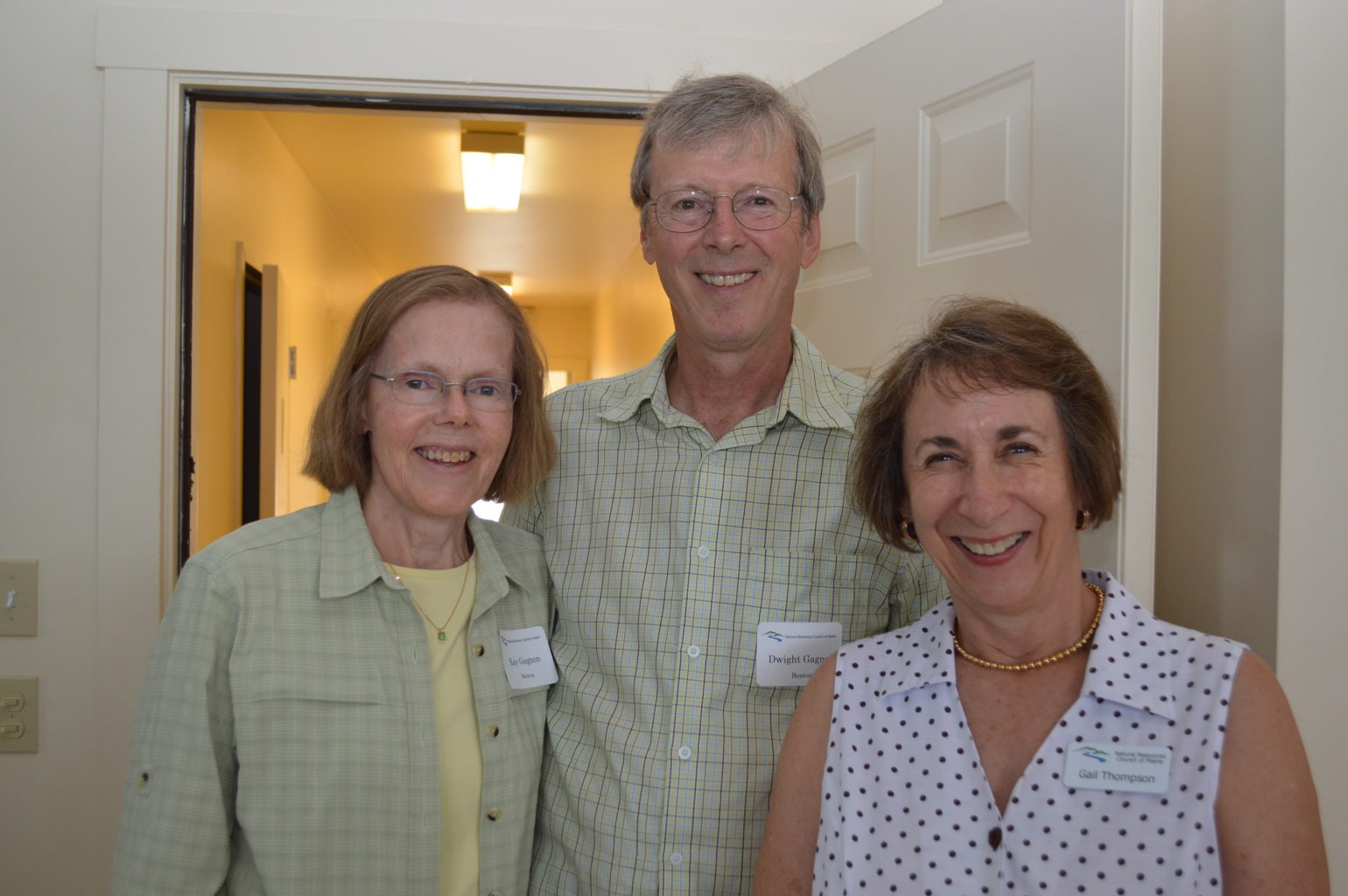 Recently I talked with Dwight more in depth and am happy to be able to share it here. This is Dwight’s story:

Dwight attended the University of Maine at Fort Kent (UMFK) in the mid-1970s. While Dwight was there, UMFK started one of the nation’s first environmental studies programs, in 1973 or ’74. Dwight said that there were a lot of students from Maine but also a lot of out-of-state students from Massachusetts, Connecticut, New York, and beyond. Students came because they were interested in the environment, and the location near the Allagash enticed them. Much of the discussion among students and others in Fort Kent at the time was about the Dickey-Lincoln Dam, a hydroelectric project that, if built, would have flooded nearly 90,000 acres of forests and waterways along northern Maine’s St. John River. NRCM worked to block this project for many years and was successful when the project was finally scrapped in the mid-1980s.

With all of the discussion of Dickey-Lincoln and Dwight’s interest in conservation, he took several environmental studies classes (at that time, the program was mostly involved reading books including Rachel Carson’s Silent Spring) while working toward his degree in biology. His ultimate goal was to become a biologist for the State of Maine.

While taking one class, his professor asked for volunteers to help collect data about can and bottle litter. As it turns out, this project was done to help Maine pass its now-iconic “Bottle Bill” in 1976—another project in which NRCM was a leader, still our state’s most successful recycling program more than 40 years later. The volunteer data collectors were not just at UMaine Fort Kent, but recruited from all of the University of Maine campuses around the state. Dwight’s job was to travel along 1,000 feet of roadside between Madawaska and Fort Kent and collect all of the bottles and cans, which at that time were not worth five cents and had been piling up along with other trash for many years. Dwight said that the first collection took quite some time as it was a big, “horrendous” job due to the fact that so much of the trash had been there for so long. He would go back to that same stretch of road every month and collect and record any new bottles and cans that had been since discarded.

Since I was born in 1971, I don’t remember the early years of Maine’s Bottle Bill, but Dwight said that at first, you could return your bottles and get your five-cent deposit from the same place that you purchased the bottle. He said he returned a lot of his to a local pizza shop, to the disdain of some customers who thought it was a waste of time and not very sanitary to return bottles to the food establishment from which they came. But then, he said, redemption centers started popping up around the state, creating jobs and making it so that bottles and cans could be returned there and not have to be handled by every small convenience store or restaurant that sold the products in the first place.

After college, Dwight had wanted, as I mentioned, to work for the State as a wildlife biologist, but at that time, there were no open positions. He ended up working for 14 years as a dental lab technician, using his love of art and his biology degree to make fixed restorative dental work; porcelain fused to gold, and full gold crown and bridge restorations. He also earned a Master’s degree in Business from Thomas College. His new goal was to become a biology teacher, but anyone (myself included) who was looking for a public school teaching position in the early- to mid-1990s knows that they were few and far between. So, Dwight decided to begin work at an ed tech at the school in Benton, hoping to get his foot in the door to wait for a full-time teaching position to become available.

While in Benton, Dwight was approached about becoming their computer/IT teacher, in charge of maintaining the Mac classics in the computer lab and helping students learn to use them. His Master’s in business gave him the “in” he needed to take on this position. After Benton, he went to Winslow’s school system to do similar work for many years until he left to take care of his parents.

These days he has more time to work on his art. In fact, the 2017 Common Ground Fair poster contest wasn’t the first time he entered. It was the sixth.

Dwight’s entries all have something in common: chickens and his neighbor’s border collie. All of his entries included one or the other. He talked to me about the reasons he thought various entries didn’t work for the fair, but those pieces of art ended up in other places—one is on his business card; another hangs at a friend’s house.

This year’s poster artwork is of some chickens, Colombian Wyandotte chickens to be specific, that Dwight and Kay raised starting in 2006. They no longer have the chickens, but they have a lot of photographs of the chickens, and that is what Dwight uses to create his art. That, and a grid system on his canvas (thanks to his background in drafting) that helps him to ensure the proportions are right.

He started this year’s poster in spring 2015 and worked well into that summer. His prep work for his paintings (sketching, gridding, etc.) takes about 60 to 80 hours of work before he even begins his first brushstroke on the canvas. After he began his final work on the canvas, it took about a month to complete.

Along with this poster art that he has created, Dwight said he is a member of the Guild of Natural Science Illustrators, which once had a conference in Fort Kent. At that conference, they talked about Catherine “Kate” Furbish, a famous naturalist whose work is at Bowdoin College (she was alive in 1800s in Maine and spent much of her career as a botanist, classifying plant species). One of her discoveries that was named after her, the Furbish lousewort, was so rare (only found along the St. John River in Aroostook County), that protection of the lousewort stopped the Dickey-Lincoln hydropower project from happening.¹

Here is my favorite story from my conversation with Dwight last week. He said that right out of college he went to a sustainability conference (before “sustainability” was even called that) and saw Scott Nearing, author, along with his wife, of Living the Good Life, a “back to the Earth” book about living efficiently and simply. The Nearings lived on Maine’s coast, and Mr. Nearing was speaking at the Hinckley campus near Skowhegan. Dwight said that conference affected him and made him even more interested in protecting the environment around him.

Fast forward to this summer and Dwight received a call and photo from his daughter, who was visiting The Good Life Center in Harborside, Maine, the visitor center and historic homestead of the Nearings. And there, placed on the table at the Center, was a copy of Dwight’s award-winning poster. A full-circle moment for sure. 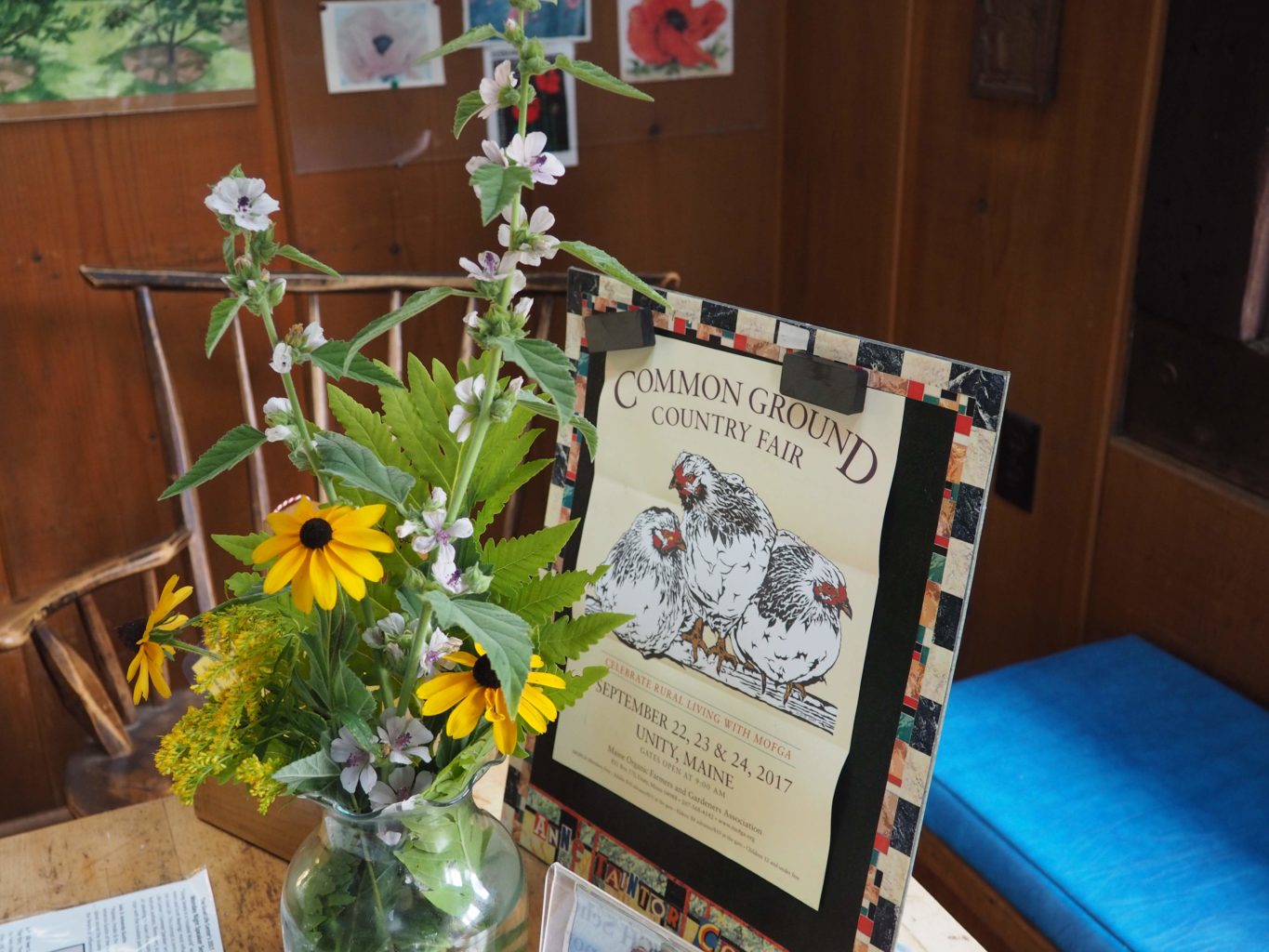 Dwight’s artwork on the 2017 Common Ground Fair poster on display at the Good Life Center, the Nearings’ homestead in Harborside, Maine