DC Trip to Oppose the Pruitt Nomination for EPA Administrator

I own Mook Sea Farm, an oyster farm on the Damariscotta River, founded in 1985. We raise oysters from egg to market size and also sell seed oysters to other East Coast growers. Last month I made a whirlwind trip to Washington, DC on behalf of my company, Mook Sea Farm, to oppose the nomination of Oklahoma Attorney General Scott Pruitt to be the Administrator of the Environmental Protection Agency (EPA).

Josh Saks from the National Wildlife Federation was my very able DC guide. On Wednesday morning we attended a constituent coffee hour with Senator King followed by a meeting with Pete Benoit, Senator King’s staff person who handles fisheries issues. In the afternoon, Josh and I met with Mary Grace Schley, Senator Collins’ environmental staff person. 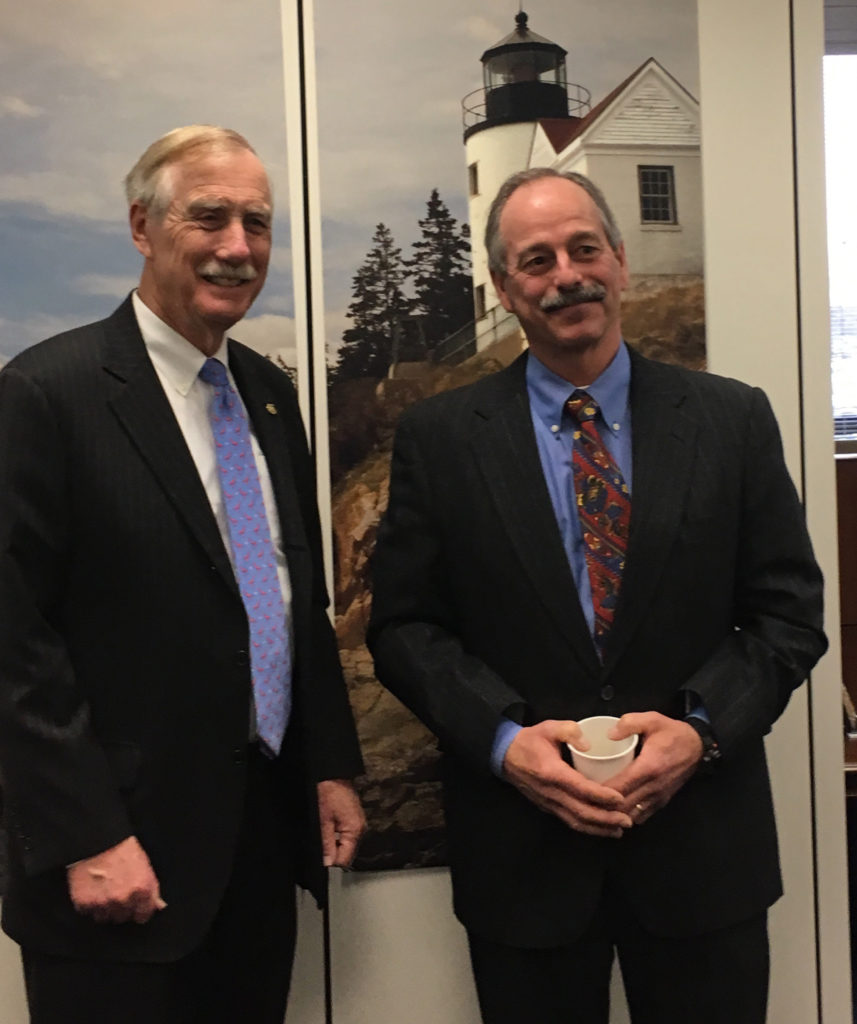 Senator King with me during my visit to Washington, DC in February 2017

On the trip to Washington, I thought long and hard about what I might say that would make a difference, especially to Senator Collins, who had at that time not taken a public position on the Pruitt nomination. It seemed unnecessary, given the widely publicized information about his record, to point out why Mr. Pruitt was (is) unsuitable to head the EPA I decided to focus on my own story.

I told the story of being almost forced out of business by illegal dumping of septic and chemical waste next to my hatchery. I explained the personal anguish and stress this caused for an entire year. Mook Sea Farm would likely not have survived were it not for the Clean Water Act.

I also explained that a decade or so later, the impact of greenhouse gas emissions suddenly became very real—no longer an abstract, future problem. Carbon dioxide emissions, dissolving in the ocean and changing precipitation patterns in the Northeast, had slowly degraded the lifeblood of my company: the seawater we pump into the hatchery. Our production of shellfish larvae became very unpredictable. For us, ocean acidification is a fact of life. We must now buffer all of the water we use for growing our oyster larvae.

The challenges don’t end there. The Gulf of Maine is warming faster than almost anywhere else on our planet. For an oyster farmer this means we must now follow expensive harvesting and handling guidelines to ensure consumer safety. It means that shellfish diseases common in southern waters that used to be controlled by our harsh winters, now threaten our crops. One only has to look to Connecticut, Rhode Island, or Massachusetts to know that warming temperatures spell a very uncertain future for Maine’s lobster industry, which is the cornerstone of Maine’s marine economy.

We’ve seen big changes in precipitation with more runoff from land. This means more frequent closures of shellfish growing areas and, of far greater concern, threats to primary production in the Gulf of Maine. The higher levels of dissolved organic matter associated with more runoff has been linked to a five-fold decrease of photosynthesis by marine phytoplankton—the very foundation of the food web that supports our fisheries. While we shellfish farmers and harvesters may be able to adapt to higher storm surges and flooding along our shores, as sea level continues to rise, the major coastal markets for our seafood will increasingly be thrown into chaos by storms like super storm Sandy.

There is a lot at stake when it comes to environmental protection. I have traveled a long and challenging path to build a company that is sustainable, provides good jobs, and contributes to the local and state economy. Backtracking on existing environmental laws crucial to my business, and clinging to a fossil fuel-based economy threatens not just the future of Mook Sea Farm, but also the economic future of all whose livelihoods depend on a healthy Gulf of Maine.

Waiting in the airport on the trip home, I heard the news that Senator Collins would not vote for Scott Pruitt’s nomination. Although I knew that my visit did not influence her decision, since she had clearly already made it, I felt incredibly thankful that both of Maine’s senators understand the importance of environmental quality to our state’s economy and identity. I did not regret making the trip. Maybe I provided one more story that will help them convince a colleague that a clean environment is good for the economy.