Everybody knows Great Blue Herons. Or think they do. Sure, their tall, long-necked, dagger-billed profiles make them pretty unmistakable as they stake their claims across Maine’s ocean shores, lakesides, ponds, streams, rivers, and muddy wetlands. Natural Resources Council of Maine members have shared with us oodles of photos of these magnificent birds. Maybe you call them simply “herons.” Maybe you call them cranes. If you’re feeling very familiar and a little irreverent, you might just call them sh*tpokes. Regardless of what you call them, you know what they are when you see them.

But do you know what they eat?

Once you know, not even their fancy plumes may be enough to salvage the dignity of a bird that appears so regal. 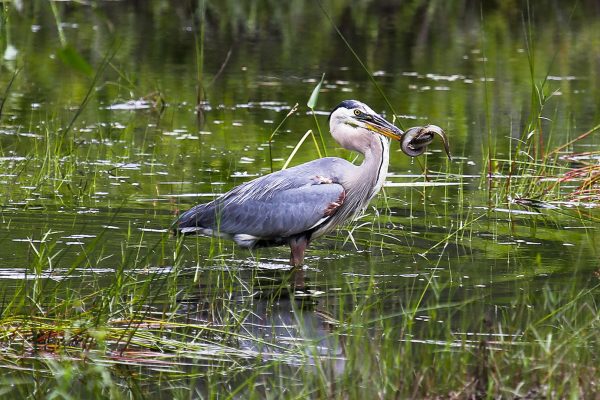 Once you know what Great Blue Herons really eat, not even their fancy plumes may be enough to salvage the dignity of a bird that seems so regal. (Photo by David Small)

Great Blue Herons occur across almost the entire U.S. and southern Canada. They winter south to northern South America. Here in Maine they are found across the state in summer, and a small number winter along the coast of southern Maine.

Given most people most often see Great Blue Herons foraging in shallow water along shorelines, it’s easy to imagine the birds dine on nothing but small fish. But when you stop to consider the scope and timing of the distribution of the species—their adaptability—it makes sense that they would also eat…other things.

Although small fish are a staple of the Great Blue Heron diet, they won’t hesitate to take a larger fish if the opportunity presents itself. As surreal as it may seem, Great Blue Herons have occasionally choked to death when they captured and tried, unsuccessfully, to swallow a fish that wouldn’t fit all the way down through their gullets. We have a video, which you can watch here, of a Great Blue Heron we watched swallow a fairly large alewife down at the head of Pemaquid Harbor some years ago. The fish was alive when the heron swallowed it, and was still alive and flapping once it was forced down into the bird’s stomach. The fish continued to struggle for quite some time, as you can see in the video.

Another time, at a small pond in Chelsea, we were surprised to see a Great Blue Heron working to subdue and swallow a large American eel that was not giving up easily. Eventually, the bird won.

We have read of Great Blue Herons eating mice and voles and other small mammals in areas where the small critters are abundant. In one study in the western U.S., Great Blue Herons were discovered feeding their nestlings more voles than anything else!

We recently saw photos of a Great Blue Heron with a dead chipmunk in its bill.

A wildlife enthusiast sent us his photos of a Great Blue Heron feasting on young muskrats—we linked to his blog here. [Warning: includes a rather graphic display of the circle of life.]

Great Blue Herons will even catch and eat other birds. The Cornell Lab of Ornithology’s Birds of the World account includes photos of a Great Blue Heron killing and eating another bird in the heron family, a Least Bittern—shockingly large to have become dinner for a Great Blue Heron, though the cannibalism shouldn’t be surprising at this point!

Decades ago we were watching shorebirds at the famed May’s Point Pool in Montezuma National Wildlife Refuge in Upstate New York, at the north end of Cayuga Lake. A Great Blue Heron was sitting on a log in the wetland; around it swarmed a group of rapidly foraging Least Sandpipers. After standing for a very long time, the whole while appearing oblivious to the sandpipers, the heron suddenly looked down at them with keen interest. It was as though the bird had suddenly realized one of the birds could make a good meal. With a lightning-fast jab, the heron struck one of the sandpipers right in the back of the head. The sandpiper likely never knew what hit it and was dead in seconds. Sadly, the heron spent the next 20 minutes trying to swallow the sandpiper, but the dead bird’s wings were outstretched, making it too wide for the heron to swallow. Eventually, the heron gave up and flew away, and presumably, the sandpiper became dinner for some other creature or creatures.

The most dramatic Great Blue Heron prey captures we ever saw and recorded on video, which you can view here, took place on a mid-winter visit to Venetian Gardens in central Florida. There, while enjoying the sights of Purple Gallinules, White Ibis, Wood Storks, and other birds rarely found here in Maine, we happened upon a Great Blue Heron that had just snatched a large water snake along the edge of a pond. For more than half an hour we watched the drama unfold as the snake fought for its life. Every time the heron seemed to have successfully worked the snake into a position to be able to swallow it, the snake would find a way to wind itself around the heron’s head and neck—until the one time it didn’t. Eventually the heron managed to get the snake off its head and subdued it with more thrashing and jabbing. It did eventually get the snake partially swallowed, but even when just the tail was sticking out, that feisty snake managed to wrap it around the heron’s bill. The heron had to regurgitate the snake several times before it finally got it all the way down.

Now, we never underestimate the adaptability and resilience of the Great Blue Heron diet.