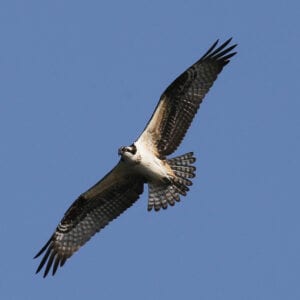 We’ve all had those unexpected house guests, folks who arrive (sometimes for an indefinite amount of time) with little to no heads up and leave you scrambling a little to make adjustments.

Birds likewise can become host to unexpected guests to their home. In fact, this spring an Osprey pair in Georgetown found themselves temporarily homeless due to a visit from a home crasher—an unfriendly one, at that.

Our brother/brother-in-law Andrew and his wife Nina enjoy a pair of Ospreys that nest near their Georgetown house, along the coast. They have watched an Osprey mom and dad raise young each summer from that nest for many years.

So they were perplexed in April when they saw Ospreys in the area that had returned from their wintering grounds in the South, yet had not settled in to use the nest, which appeared to be in perfect condition. Days, then weeks passed, and still no Osprey neighbors in the trusted nest.

One day, Andrew and Nina, along with their neighbors, noticed a head with two ear tufts sticking up from the nest.

It was a Great Horned Owl! The bird had apparently been sitting on eggs in that nest since well before the Ospreys returned in the spring to set up housekeeping. To humans on the ground, the nest appeared empty, rejected for unexplained reasons by the Ospreys that had successfully raised families there. 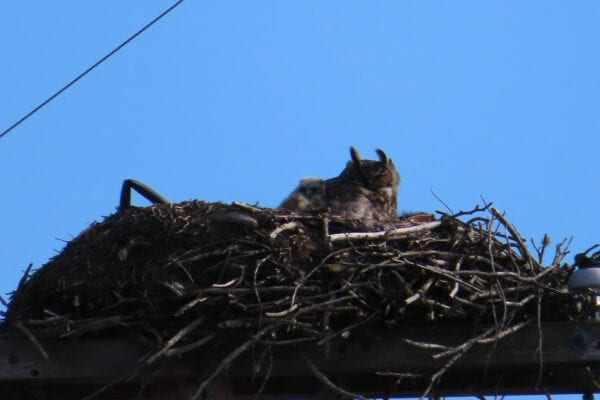 A pair of Ospreys along the Maine coast recently had an unexpected guests—who kept them out of their home for weeks! Photo courtesy of Nina Roth-Wells.

Great Horned Owls are famous for starting their nesting season as early as February even here in Maine, despite often frigid temperatures and, in most winters, plenty of snow. These birds had been incubating eggs through March and, by April, probably feeding nestlings—despite the conspicuousness of this huge nest, the birds, like good doting parents, had made the safety of their offspring a priority and escaped detection by the nearby humans until late April.

The Ospreys provided no clues as to the happenings in the nest. They are big birds, but they know enough not to tangle with a Great Horned Owl—especially one with young in the nest. Sometimes called “tigers of the air,” Great Horned Owls are tenacious and deadly predators known to kill a wide range of mammals and birds that are too big to be preyed on by much else. Andrew and Nina reported that the Ospreys gave the owls all the space they wanted!

The owls, meanwhile, once known to the neighborhood, became a curiosity that could be watched from the road at a distance that ensured they were not disturbed. To the great delight of the human observers, the day arrived when at least one small owlet peeked its head out from under the wing of the parent like a white ball of fluff with eyes.

Curious to know more about this practice of nest takeover, we checked the Great Horned Owl account in the recently released Birds of Maine book. We learned that this species has been found nesting in Osprey nests at least twice before in Maine, including once in Woolwich. 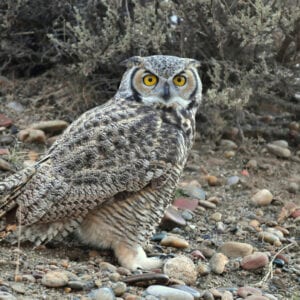 Andrew and Nina noted that the owls were not seen on the nest anymore after mid-May, which makes sense since that is the normal time young owls fledge. They typically don’t go far, so keeping an eye out can sometimes reveal the young birds roosting. At this age, the young owls are still dependent on the adults for food and will be throughout the summer—they can often be heard making screechy begging sounds in the night as they wait for the adults to bring them something to eat.

So where did all of this leave the Osprey pair who had been displaced from their (sort of) rightful home? They began reoccupying the nest just days after the young owls fledged! As of this writing, they are sitting on eggs. Like many a host of surprise home guests, they are no doubt pleased to be able to have the place back to themselves!