A Strange and Mysterious Feathered Creature

Maine has been home to many a mysterious creature. There was the so-called mutant beast that roamed the town of Turner, accidentally killed by a passing car in 2006. In 2018, an animal “that was not a whale” but only “may” have been some kind of shark washed up on the shore of Higgins Beach in Scarborough.

No one knows how long a strange and mysterious feathered creature has been flying around Maine’s airspace, landing in conifers, and making a strange “jip, jip, jip” sound. It’s a bit larger than a House Finch but smaller than an American Robin. The males have a muted red head and body, and dark brown wings and tail; the females (and males in their first year) have a glowing golden head and body, and dark wings.

What makes them especially noteworthy, though, is the bill. The tips of the upper and lower parts of the bill of this being grow past each other and cross in a very dramatic fashion. It looks so bizarre that someone could easily think it a bird suffering from disease or injury. But for this it is quite the norm.

What is the true identity of this fascinating lifeform? 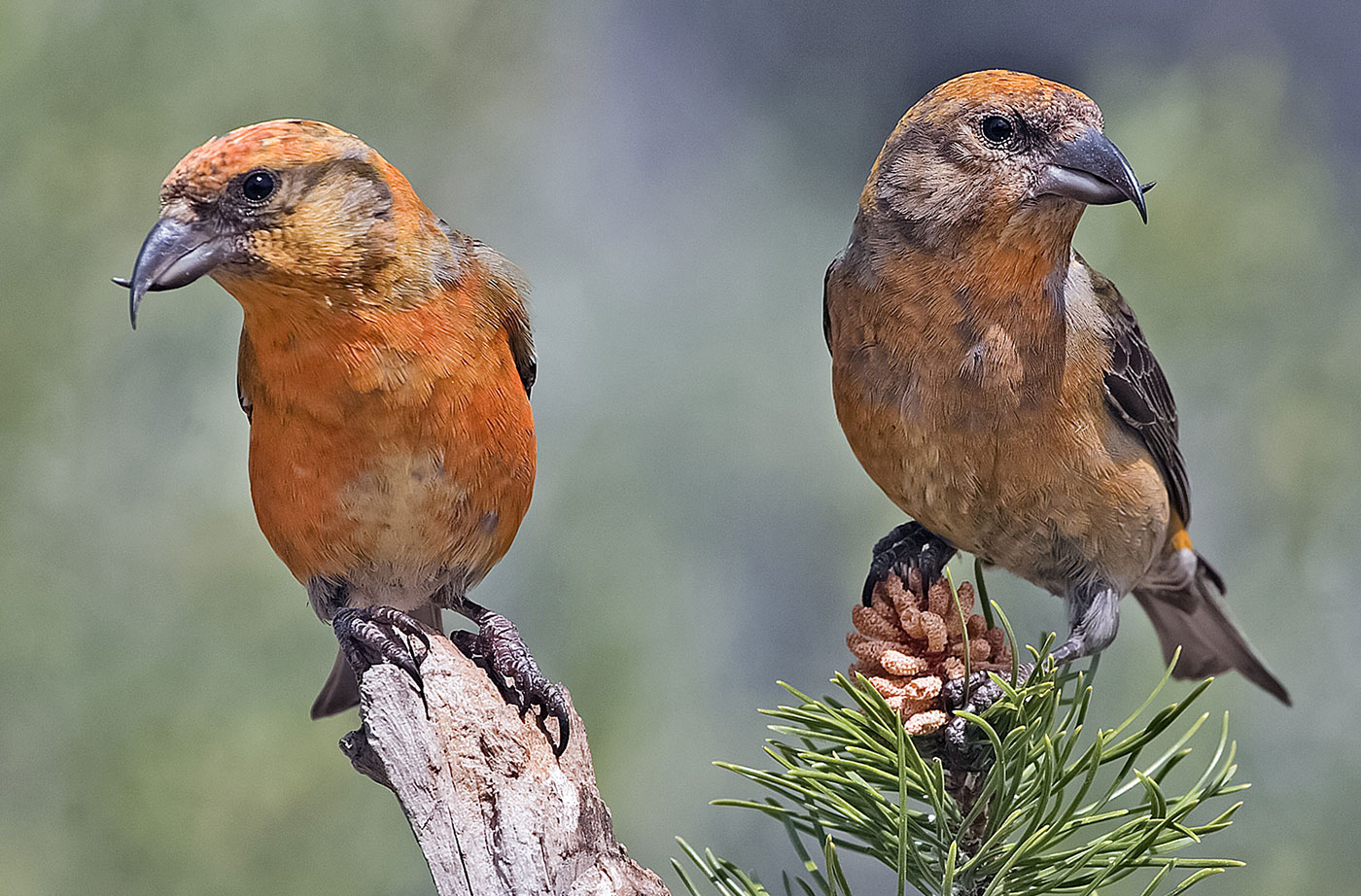 For people who may not be familiar with the species, Red Crossbills may fit the bill of some of Maine’s famous mystery creatures. (Credit: Elaine R. Wilson, www.naturespicsonline.com / CC BY-SA (https://creativecommons.org/licenses/by-sa/3.0)

It is a crossbill! And they have been appearing around the state with unusual regularity. We had one “jip, jip”-ing across our yard just this week.

The crossed bill is a special anatomical feature that allows them to easily extract food that is hard for other birds to access. They eat the seeds of trees like pines, hemlocks, firs, and spruce, and the find their delicacy nestled down in the crevices of hard-to-access cones.

Worldwide, there are six formally described species of crossbill; three are officially recognized species here in North America. Right here in Maine, we have two of those species, the Red Crossbill and the slightly smaller White-winged Crossbill. The latter species is generally the more common of the crossbill species in Maine, but like many finches (crossbills are part of the larger family of finches), White-winged Crossbills have boom and bust years depending on the crop of spruce and fir cones available in any given year.

Red Crossbills are more mysterious in many ways. Research over the last 30 years has shown that there are at least 10 different types of the Red Crossbill across North America (and in high elevations of Central America) and that there are still more across Europe and Asia. The North American types can be distinguished by experts analyzing sound recordings of their calls. One of our old friends from the Cornell Lab of Ornithology, Matt Young, is one of the experts who identifies the types of Red Crossbill based on sound recordings submitted to him via eBird.

The breeding range of Red Crossbill is generally south of the range of White-winged Crossbill but with broad overlap—even the delineation of the breeding range has been confusing. That’s partly because Red Crossbills are quite adaptable to feeding on the seeds of different species of pines, firs, hemlocks, and spruce, perhaps because of their generally larger bill compared to the White-winged. That adaptability seems to have allowed them to do well in pockets of coniferous forest habitat across a wide region. But their ability to move around and breed in a spot where they find abundant food one year and abandon it the next, means that our human notions of relatively permanent breeding ranges just doesn’t fit very well. 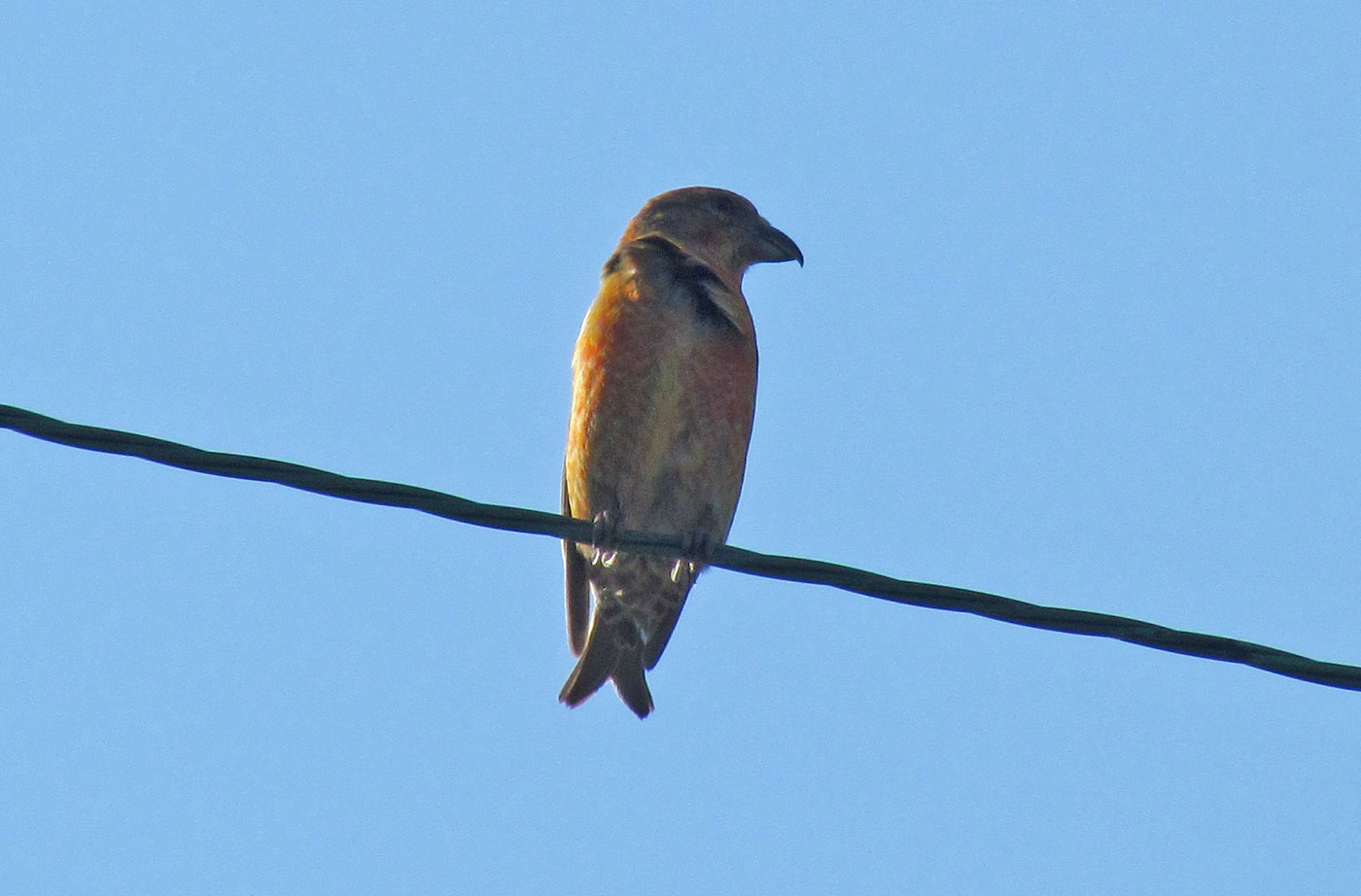 Red Crossbill seen in The Forks, Maine, by the authors. (Credit: Jeff Wells) To see a bad video of a cool bird, the Red Crossbill, click here. (Courtesy of Jeff Wells)

Here in Maine, there have been in the past, long strings of years with relatively few sightings of Red Crossbill across much of the state. In contrast, the last two years, and certainly this year in particular, Red Crossbills are being found in many areas. We have had Red Crossbills flying over in the Gardiner and Richmond areas several times just in the last few weeks, and many other birders have been reporting them to eBird as well. The numbers on Mount Desert Island this summer appear particularly high based on eBird reports, but Red Crossbills are being seen across much of the state.

Red Crossbills often breed in August and September as they take advantage of pine, hemlock, fir, and spruce cones where seeds are available during that time. Keep your eyes and ears open in the coming weeks to see if you can get a glimpse of the strange and mysterious Red Crossbill. Just don’t expect it to enter into Maine’s mystery lore. And that’s a good thing!