From “Steller” Occasion to “Golden” Opportunity 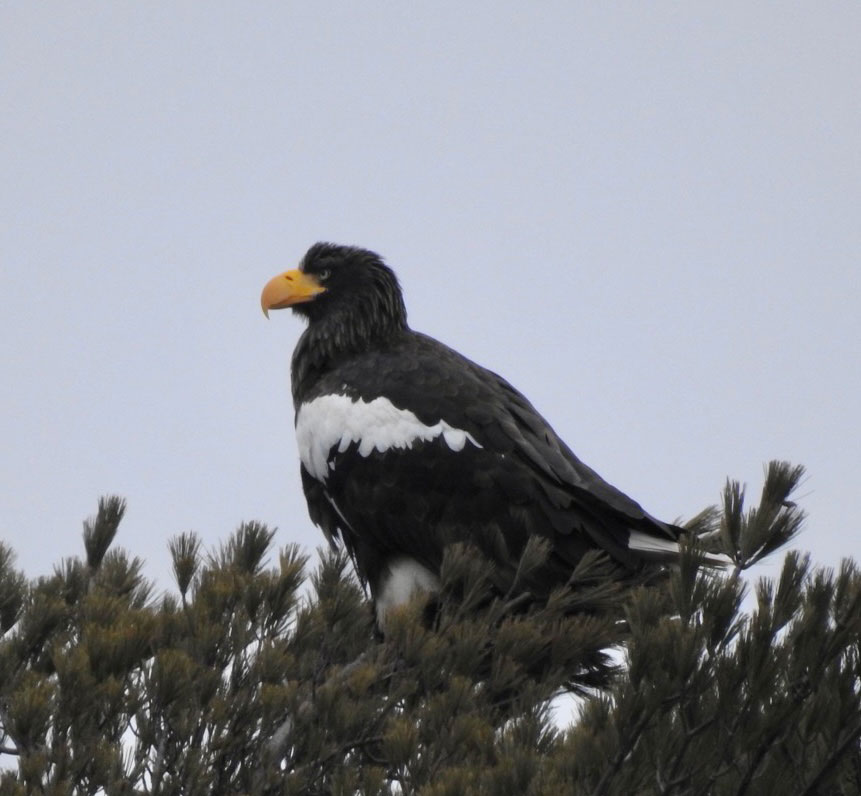 Maine has always been a destination for celebrities, but perhaps none has attracted so much attention or been seen by as many fans as the Steller’s Sea-eagle. This rare bird has been all over the local, regional, even national news, attracting admirers—including Natural Resources Council of Maine staff and members!—from across Maine and far beyond.

Steller’s Sea-eagle is among the world’s rarest species. There are estimated to be just 4,000-6,000 total birds remaining (and sadly, population numbers are declining). Most breed on and near the Kamchatka Peninsula of Russian Siberia and winter south to northern Japan. No wonder it’s drawing massive crowds during its visit to Maine! During our two excursions, we saw cars with license plates from Tennessee, Wisconsin, Delaware, Michigan, New York, Texas, Alabama, Illinois, and many other states. We overheard conversations in which one fellow said he’d flown in from California for the occasion.

Fascinating to think that so many people, from so many different places and backgrounds, came to catch a glimpse not of some mind-boggling popular person but…a bird.

Albeit, it is a pretty mind-blowing one, not only for its rarity but also for its massive size (larger than our neighborly Bald Eagles—Steller’s Sea-eagles have a wing span of eight feet!), dramatic, easy-to-ID color pattern (dark brown with shockingly contrasting white tail, shoulders, and legs), and that head, with an enormous orange bill—that “Is that for real?” bill! 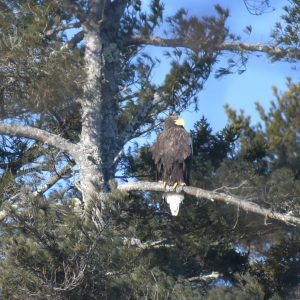 Subtle but particular markings on our visiting Steller’s Sea-eagle have allowed some experts to identify it as the same individual that has been roaming around eastern Canada since the summer. It may also be the same bird seen in Texas in the spring and in interior Alaska the year before that. Talk about an ambitious travel schedule!

Prior to this individual’s wanderings, the closest appearance of Steller’s Sea-eagle to Maine was in Alaska, where seven records span the years 1977-2004. Most of these birds were in the Aleutian Islands, and a number of them stayed for a several years. Another bird showed up far out in the Pacific on Midway Atoll, one of the westernmost islands in the Hawaiian chain—and 1,800 miles from its expected range!

Our visiting Steller’s Sea-eagle first made thousands of Massachusetts birders excited when it made an appearance along the Taunton River. It had spent the previous months popping up in New Brunswick, Quebec, and Nova Scotia, to the delight of bird enthusiasts across eastern Canada.

Then it was spotted in the Georgetown (Maine) area in December, where many a clever birder was able to add it to their year list for 2021 and 2022, having seen it late in the year and traveling back to see it again on the first day of 2022—Happy New Year to them!

The bird eventually spent significant time on an island halfway between Five Islands and Reid State Park, and was easily seen from grounds of the Grey Havens Inn—fortunately, the inn’s owner generously allowed birders a view from the property. One of us (Jeff) combined a visit with brother Andrew with both of them seeing the bird, perched like a king on the top of one of the tallest white pines on the point across the cove from the inn. 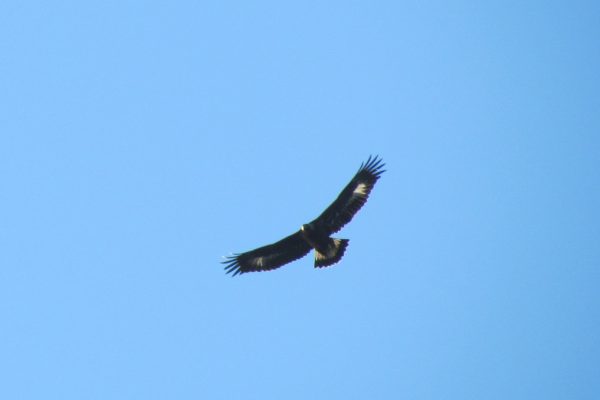 The author’s visit to Pemaquid Harbor to see the Steller’s Sea-eagle turned into a “golden” opportunity when a Golden Eagle flew in from across the harbor. (Photo by Jeff Wells)

That seems like so long ago! Since then, the bird settled reliably in Boothbay Harbor, where it appeared reliably atop tall spruces on Mouse Island, offshore across from the Spruce Point Inn. It took a few hours on a beautiful blue-sky but frigid, single-digit day to go see it. As we drove to the parking area at the inn, all binoculars and scopes were aimed on the bird. In the few minutes it took us to park, the crowd was breaking up—we’d missed the Steller’s Sea-eagle by mere minutes. And our ongoing search that afternoon resulted in a passing glimpse as the bird apparently flew to roost.

Which is why we tried again the following week, when the bird was relocated one peninsula up the coast, at Pemaquid Harbor. Another blue-sky freezing afternoon—and another miss. The bird had left 20 minutes before we arrived—two hours earlier than when it had been going to roost. We thought it might circle back.

It didn’t. But in the moments where we stood hoping, another large, dark bird flew in over the harbor. Not big enough for the Steller’s, but definitely dark with white markings. As the bird got closer, we could see it was a first-year Golden Eagle! A pretty good find on a Maine winter day, especially as it flew in low over our heads. It didn’t stay long, just circled over the Contented Sole restaurant, then flew back out the way it came. 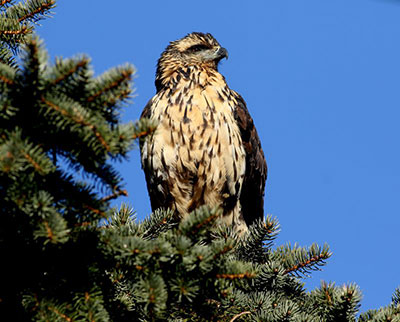 The Great Black Hawk, a tropical species, was a fixture in Portland in 2018, where people traveled from places near and far to photograph the bird. Courtesy of Stephen Bennett

At this writing, the Steller’s Sea-eagle was back at Mouse Island in Boothbay. Will it stay? Will it peninsula hop up or down the Maine coast? That is part of the fun and mystery that makes birding so enjoyable. Fortunately, this bird is built to withstand Maine’s winter weather, so at least there is no need to fret that it will suffer the same fate as one of Maine’s other famous visitors, the Great Black Hawk. All things considered, the Steller’s Sea-eagle should survive just fine here among us Mainers and winter visitors.

If you want to stay up on the latest whereabouts of the Steller’s Sea-eagle or other rare Maine birds, we recommend using the newly created GroupMe app, where birders (including us) post frequent and timely updates. When you join the group, you need to interact with at least one message in order to stay in the group. You could “Like” (using the heart button) any message after joining and you’ll be sure to stay in. Here is a link to join: https://web.groupme.com/join_group/84170428/yK8UXk4M