Have you looked out at your bird feeder lately and seen birds you hadn’t seen the previous day—perhaps not since the previous year? With most of us staying home these days and exploring nature around our yards, many people are seeing Ruby-throated Hummingbirds, Rose-breasted Grosbeaks, and Indigo Buntings that suddenly appear at their bird feeders in the morning, seemingly out of nowhere. 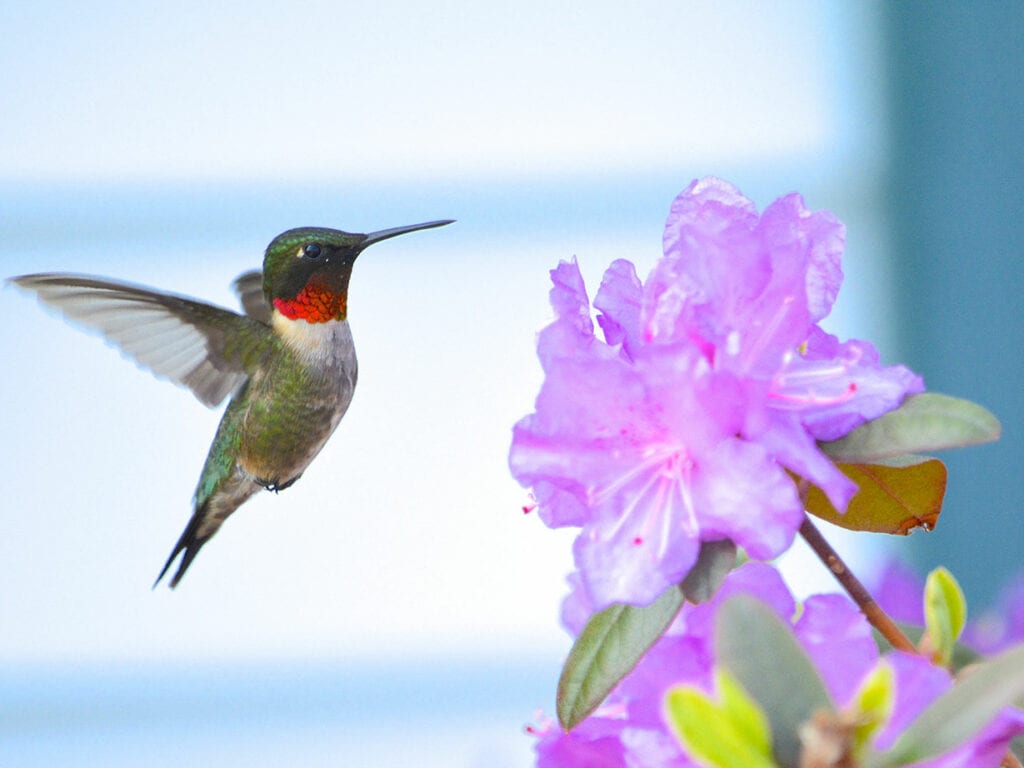 Night-migrating birds such as the Ruby-throated Hummingbird and Rose-breasted Grosbeak can seemingly appear in your yard out of nowhere, when in fact they’ve likely been traveling much of the night. Photo by Rebecca Tripp 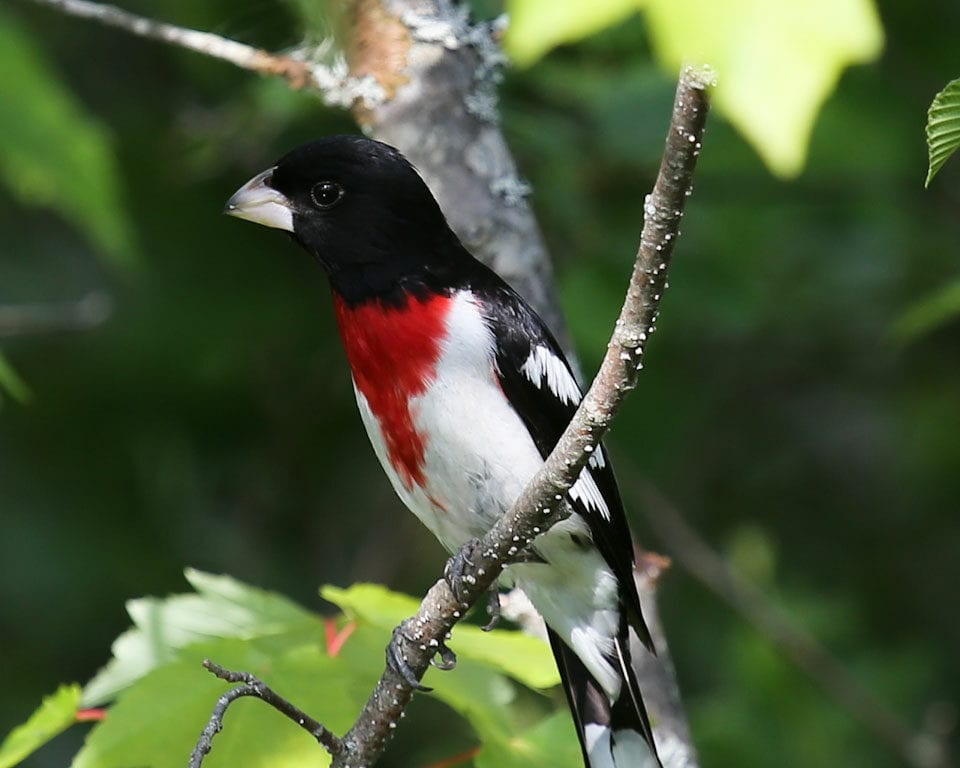 The truth is, these and most of the bird species not seen since last year likely arrived overnight, after long journeys that started at their far away winter homes in places like Central and South America, the Caribbean, and the southern U.S. They appear “out of nowhere” because they fly overnight, and for some of these birds, your yard, along with countless locations such as Land for Maine’s Future locales and Maine Public Reserved Lands—protected with the help of the Natural Resources Council of Maine and our members—provides much-needed resting sheltering, and feeding areas on their way farther north. 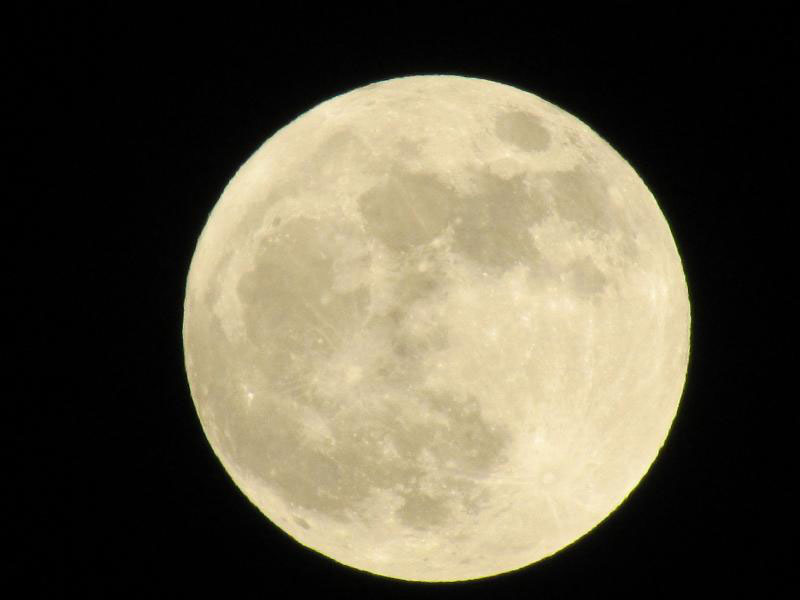 Most birds migrate at night. Photo by Jeff Wells

Perhaps you have heard these birds as they pass overhead in the night. Or maybe you’ve heard them but didn’t know they were birds. Some, you would certainly recognize—the honks of night-migrating Canada Geese, for instance. But the calls of many of the songbirds might sound more like insects to the uninitiated. The calls of the Swainson’s Thrush bear a remarkable resemblance to the iconic spring peeper—except that they emanate from hundreds of feet in the sky where no frog could actually be. By listening to or, even better, recording the calls of night-migrating birds, it’s possible to solve the mystery of which birds are passing by overhead during the night.

We have been using our nocturnal bird call monitoring station again after a number of years of its absence and are enjoying the wonderful insight it gives us into the stream of migrating birds that pass over us while we sleep. The “station,” as we call it, consists of a number of pieces. There is a homemade microphone mounted inside a large, plastic flowerpot with a piece of an old sheet over the top for protection from the elements. We place the flowerpot in a chair on our porch and run a microphone cable from it under the door that snakes its way to the kitchen table. This cable is plugged into a small pre-amp box on the table. A smaller cable runs out of the pre-amp and plugs into an old laptop computer’s audio input jack. 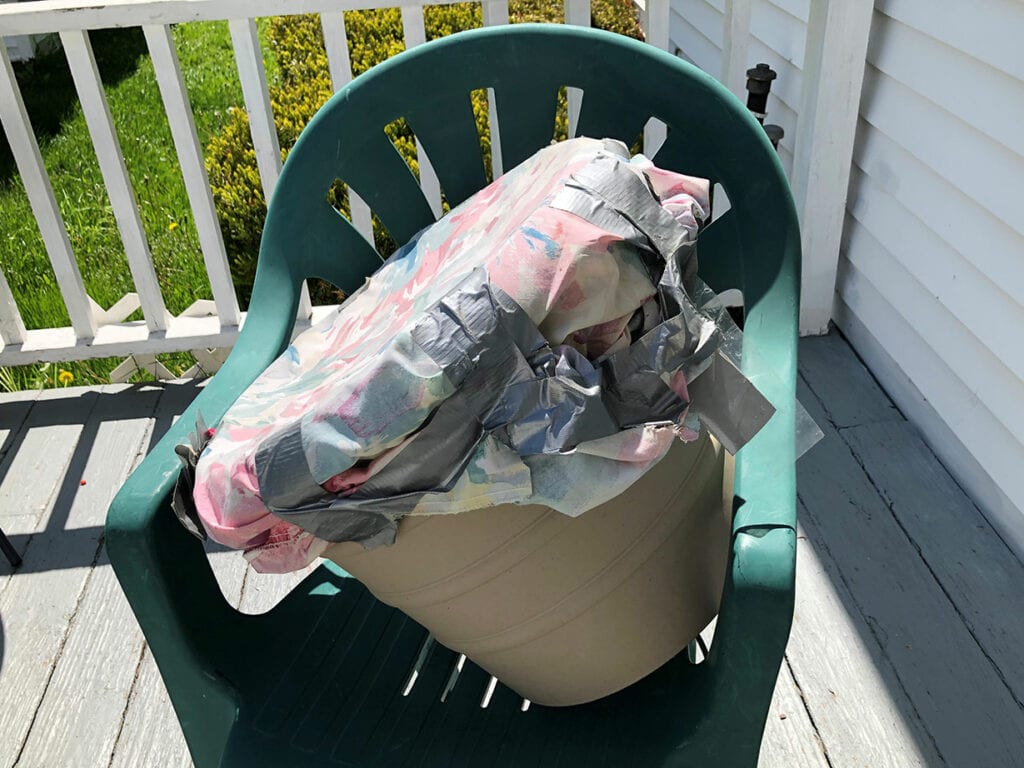 That computer is too old to do too much anymore but it can run two small software programs that evaluate all of the incoming sounds. It saves any that meet the frequency and duration of possible bird calls. Each of these sounds is saved automatically in a small file with a file name that provides the date and the time, down to a hundredth of a second. 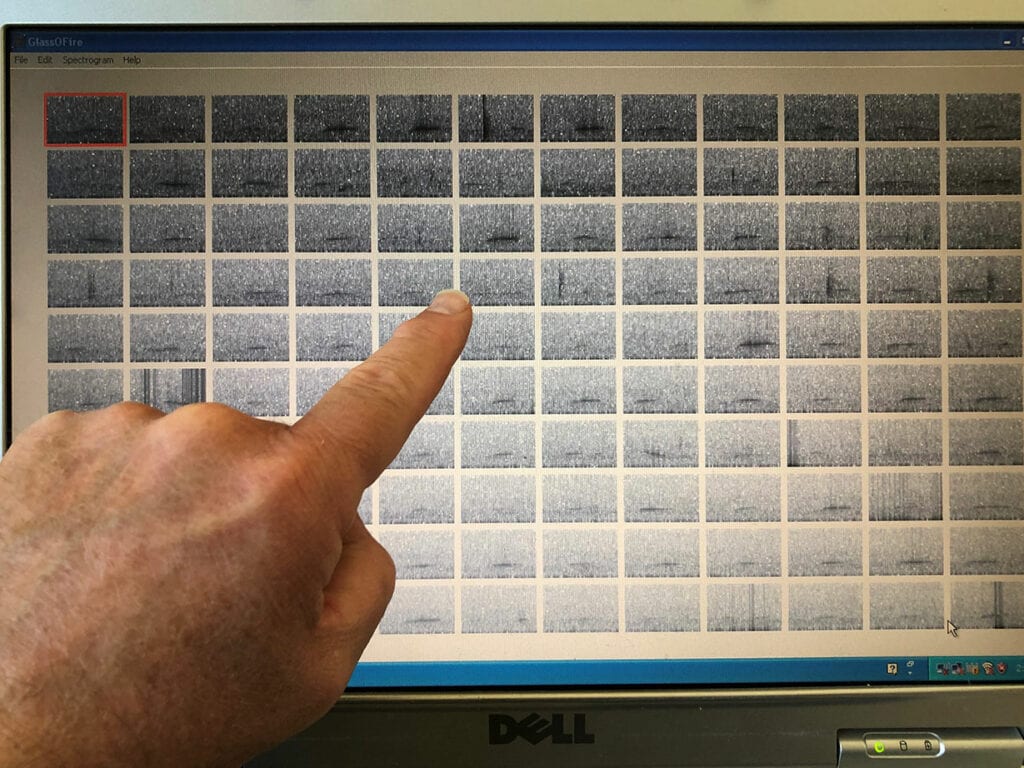 Unfortunately, the “possible” bird call sounds the software saves typically includes many non-bird sounds—wind chimes, car honks, slamming doors in the neighborhood, and sometimes even people having very loud conversations as they pass on the sidewalk some distance away. Each morning over a cup of tea we sort through the hundreds, sometimes thousands, of sound files to find and save all of the bird sounds. The rest are deleted into the computer’s trash bin. 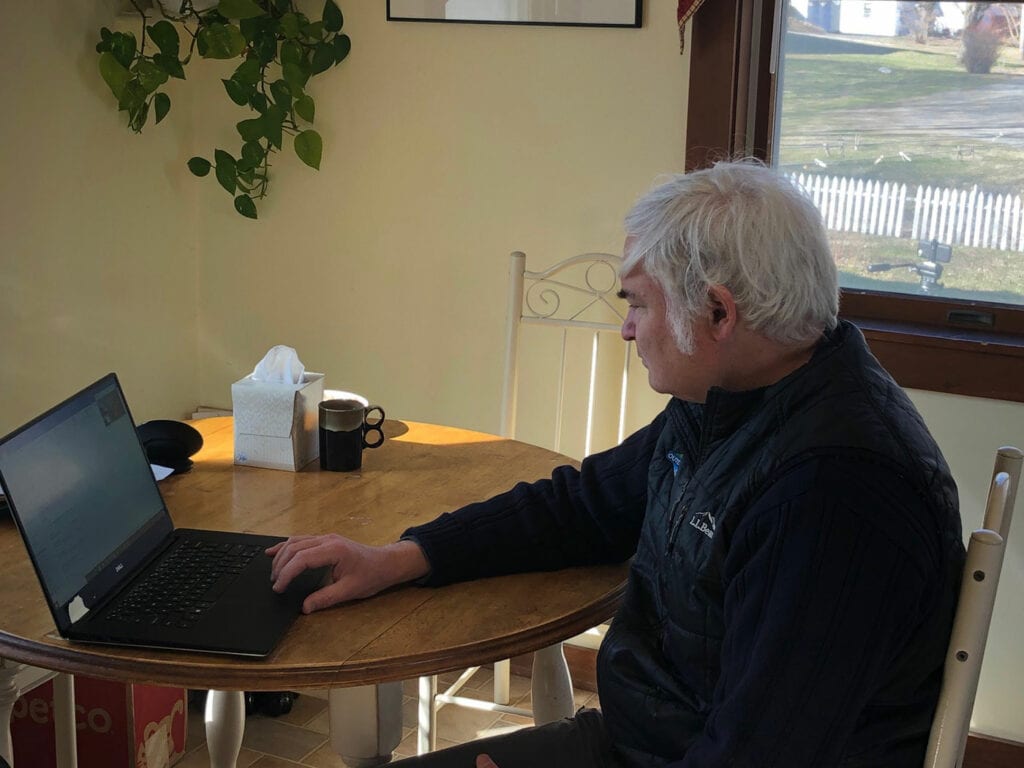 This time of year, the authors start their day off with a cup of tea as they sort through spectrograms of the sounds captured on their monitoring station during the night.

Fortunately, we have another computer program that makes it easy to do that sorting, and within a few minutes we usually are able to get a peek into the mysteries of the bird migration that took place in the dark sky over our house the night before.

We are still amazed at the birds that fly over us each night. On two recent consecutive nights we have had four species of thrush—Wood Thrush, Swainson’s Thrush, Hermit Thrush, and Veery. The only one of these four species that we have actually laid eyes on yet this spring has been the Hermit Thrush.

Our nocturnal bird call monitoring station has also let us know that we have had both Sora and Virginia Rail pass over our home. Both are small, chicken-like (but unrelated to chickens) marsh birds with big feet; they are typically very secretive and hard to detect. They rarely stray from the environs of the freshwater marshes that are their only habitat. But they do migrate south each winter; that means they have to migrate back again in the spring. They make that journey at night, and they call when they do. That’s how we find out that they are using the air space over our town as they flap their way north. 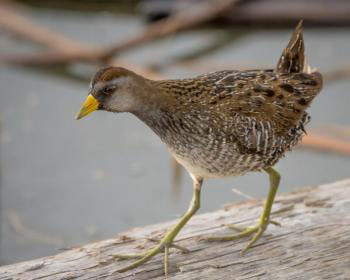 Sora, a chicken-like bird, is a secretive species that is hard to see during the day. The authors know they pass over their house only because the birds vocalized during their night migration. Photo by Becky Matsubara from El Sobrante, California/CC BY https://creativecommons.org/licenses/by/2

We’ve had five species of sandpiper go over in the last few days and scads of warblers including our first-of-the-year Canada Warbler. As we slept, we were graced by a Common Yellowthroat that broke out into a full rendition of its “witchety-witchety-witchety” song, rather than just its simple call, which is what we usually hear during their night migration. A Bobolink, nearing the end of its journey from the Argentinean Pampas grasslands where it spent the winter, went over in the early morning hours giving its distinctive “bink” call as it went. 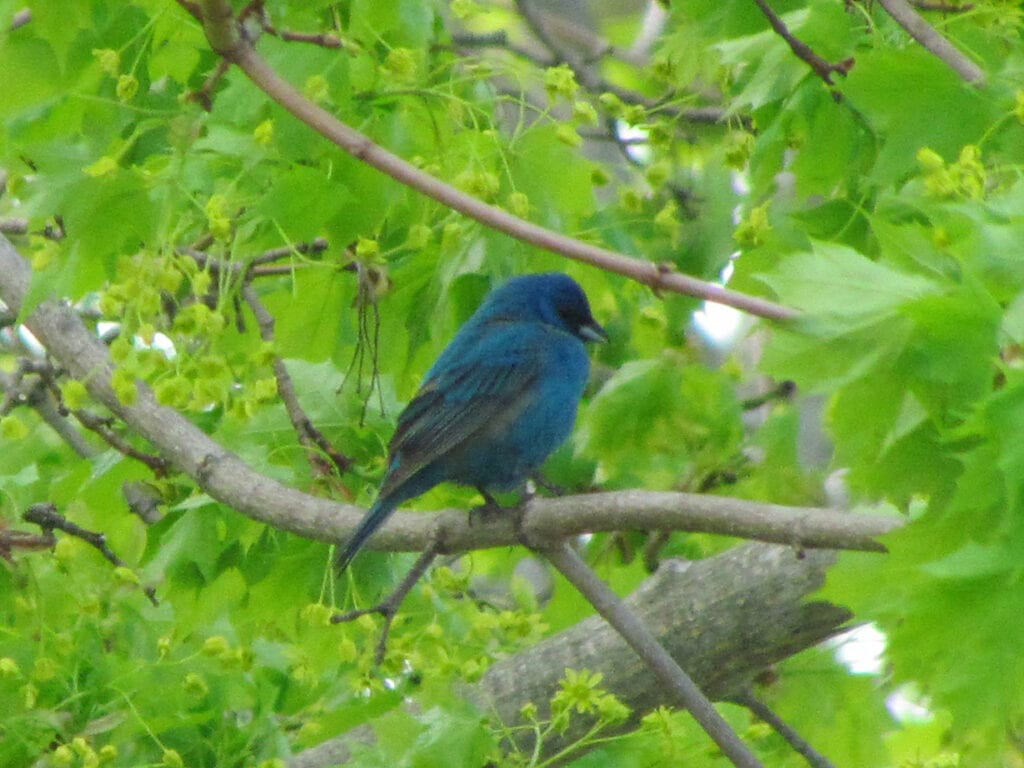 During spring migration, you never know which newly arrived birds you’ll see around your yard on a given day. Perhaps an Indigo Bunting? Photo by Jeff Wells

The list of fun discoveries goes on and on. We get up early enough each morning to check the results before we start our workday, to see what new species we find. And then we get to go out in the yard and see which of these wonderful birds made a pit stop right here. Will we see the bright orange of a Baltimore Oriole? The brilliant blue Indigo Bunting? The bright yellow of a Yellow Warbler? The brilliant red, white and black of a Rose-breasted Grosbeak? The sounds and the sights of spring bird migration renew us. We hope they are renewing you, too.