Rare Dove Wings It into Maine

The cops had been notified. A notice had been posted on the city’s Facebook page. Neighbors had been informed.

In other words, we followed the typical protocol when a VIP arrives in town.

This one was extra special. It had wings.

The guest that arrived for a short but exciting visit to our small city of Gardiner was a White-winged Dove.

And it wasn’t just in our city, it was in our yard!

For years we had been lamenting, “When will it be our turn to host a rare bird?” After all, our feeders were always full and provided a smorgasbord fit for a wide variety of species. We’d provided respite to some uncommon birds, like Hoary Redpoll and Bohemian Waxwings, which we’ve written about here in our Natural Resources Council of Maine’s blogs, but never that out-of-the-ballpark rarity.

White-winged Doves are typically found in southwestern U.S. and southern Florida, and their range extends into Central America and the Caribbean. So we were feeling pretty special. 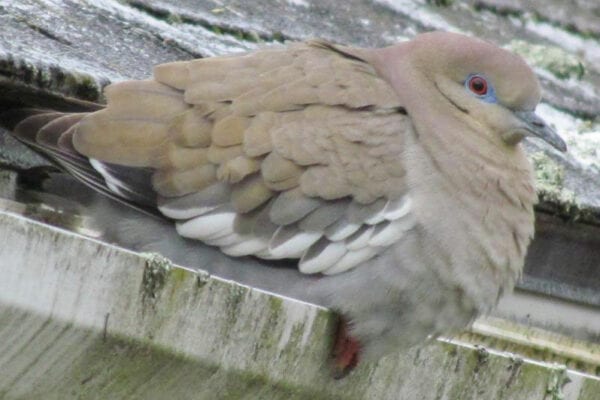 The bird woke us early in the morning on Tuesday. It sang three times (at least after we were awake enough to be aware of it) and, while we did not immediately recognize what it was, we knew it didn’t sound like a normal Mourning Dove or Rock Pigeon. Both of these species sometimes call from the roof or nearby crabapple, or from telephone wires. Once we got outside to look around, we saw only Mourning Doves. The odd dove sounds had ceased.

We wondered if should try to convince ourselves that we had somehow been fooled in our semi-awake state that morning by some kind of aberrant call of a hormone-fueled male Mourning Dove or Rock Pigeon. We knew we hadn’t, but it was painful to think we’d had a rare bird in the yard that had moved on before we got to see it and identify it. Throughout the day we kept an eye out the window but never saw anything unusual.

Then, during the late afternoon on Wednesday, while on a lengthy work call, a glance out the window revealed a different-looking dove under the feeder. It was a bit bigger than a Mourning Dove and had a square-tailed rather than the wedge-shaped tail of the familiar species. Its most significant feature was the line of white along the edge of its folded wing. When it flew, this marking flashed as a bold white patch on the middle of the upper wing. Later, we had a chance to get a closer view and could really appreciate the beauty of its powder-blue skin patch around the reddish eye. 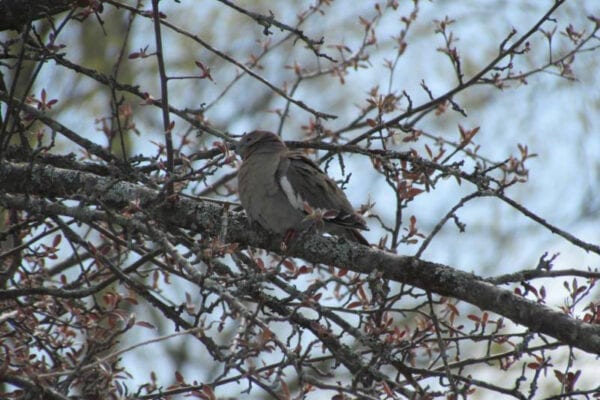 The authors awakened by a strange dove song coming from the crabapple tree outside their bedroom window. (Photo by Jeff Wells)

The northern limits of the White-winged Dove extend into southern Texas, New Mexico, Arizona, and California. In recent decades, the species has expanded its range northward as far as Oklahoma, and numbers have shown an overall increase since 2000. Small numbers occur across the Gulf Coast states now as well. The species was apparently introduced into Florida and now occurs in southern Florida. White-winged Doves also occur in the Bahamas and Greater Antilles and are said to be expanding there as well. Individuals in the northern part of the range migrate south into Central America for the winter and return in the spring to breed.

Maine’s first documented White-winged Dove was in 1973, but there have now been at least 40 records. Since 2000, at least one has been found almost every year somewhere in the state. This is part of a trend seen across the U.S. and Canada, with more and more vagrant White-winged Doves appearing north of the breeding range. Individuals have made it as far north as Alaska and Newfoundland. Some have speculated that we will also see an expansion of the breeding range significantly northward if this trend continues.

A check of the White-winged Dove species account in the new, comprehensive Birds of Maine book showed that most records of the species in the state have been in fall, though some have occurred in May and June—but none in April until our bird arrived. Ours might have been a migrant coming north who got caught up in a storm system and just kept going northward. Or perhaps it was an explorer, an individual driven by hormones or some other inner drive insisting it just keep going and going and going. Maybe its stop here in Maine and its morning singing was a test to see if it could find another adventurer of its kind to settle down with and start a new population in the strange world it found itself in. 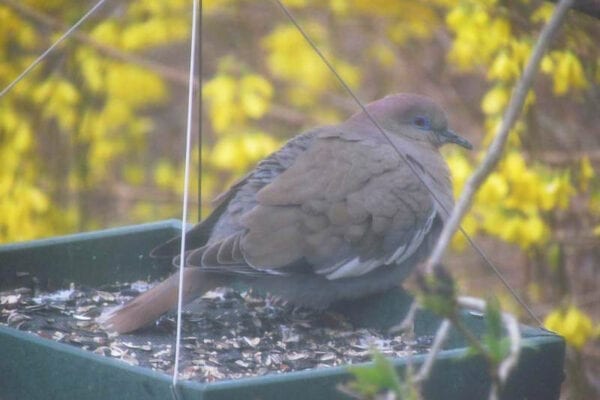 After years of offering a smorgasbord of bird favorites, a White-winged Dove enjoyed a feast at the authors’ platform feeder. (Photo by Jeff Wells)

Knowing this bird was one that other birders would want the opportunity to see, we let our neighbors know about it and cautioned them that people with binoculars and cameras would likely be roaming the neighborhood to catch a glimpse of this fascinating wanderer. We announced its presence to the world on Thursday morning via the MaineBirds listerv and on our Facebook pages.

It proved a wonderful way to celebrate Earth Day. The papers ran a story about it. Birders arrived, and we got to socially meet some new ones. A few got to photograph the bird. But by Friday, when even more birders arrived in the neighborhood, the bird had apparently moved on.

We have not seen or heard it again, though we continue to keep an eye out. Maybe it headed back south. Maybe it kept going northward. Either way, we hope it is out there somewhere, healthy and cooing away in some other neighborhood, looking for a new place and a new beginning.