Puffins and a Purposeful Person

Many people think of Dr. Steve Kress as “the puffin man.” He’s widely revered for reestablishing puffin colonies to the coast of Maine, and rightly so. But when it comes to bird conservation, Steve is much more than that. 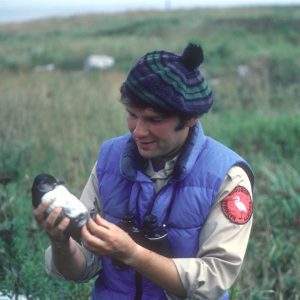 Steve with a translocated puffin fledgling at Eastern Egg Rock

We first met Steve when we were graduate students at Cornell University years ago. (Interestingly, Steve himself is a graduate of Cornell!) We, like many Cornell grad students who are also birders, spent countless hours at the world-famous Cornell Lab of Ornithology, considered by our ilk to be the “birders’ capital of the world.” Although Steve’s seabird project was part of National Audubon, his work was housed in an out-building that was considered part of the Lab of O, as we birders call it. When the completion of Lab’s new Johnson Center for Birds and Biodiversity was completed in the early 2000s, Steve moved into it. So did we! By then we had become part of the Lab of O team. Our insider’s view gave us even more opportunity to see firsthand how Steve’s work inspired awe. Sure, his charismatic subject matter—who can resist those adorable puffins, right? — was part of the draw, but Steve’s aura has always extended beyond the birds themselves. We saw a mythic researcher who was not only accessible but also engaged with anyone interested in birds and nature. During our years there, we got to know Steve as a wonderful personal friend.

So we were absolutely thrilled Steve was awarded the Natural Resources Council of Maine’s (NRCM) Conservation Leadership Award for Lifetime Achievement. It was a reminder that Steve is a giant of bird conservation. His approachable style sets him apart from so many legends in their field, and this has certainly contributed to his tremendous success. It is a reflection of his natural ability to educate, and there’s seemingly no end to his knowledge and accomplishments. Mainers—even those who don’t necessarily consider themselves “birders” are so proud that Steve’s innovative conservation projects started right here in Maine, the most famous, as we mentioned, being his reintroduction of Atlantic Puffins to Eastern Egg Rock after a hundred-year absence of the species. 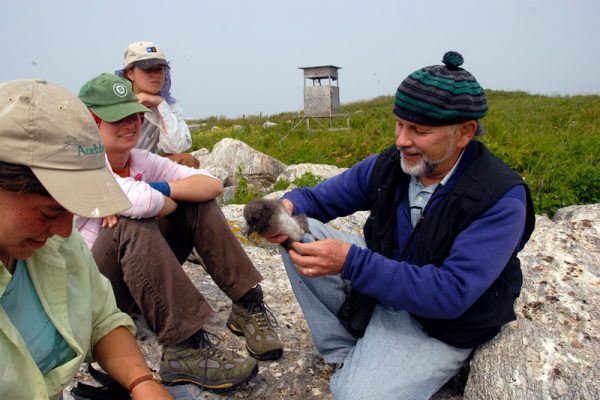 But Steve’s footprint extends across the world. The techniques he pioneered have now been used in hundreds of projects. Steve assembled a team to bring back and steward not only Atlantic Puffins, but also other seabird species across many Gulf of Maine island—work that continues today as the Audubon Seabird Institute. We are all so fortunate that Steve has trained and inspired hundreds of young seabird biologists who have gone on to carry out their own conservation projects far and wide. 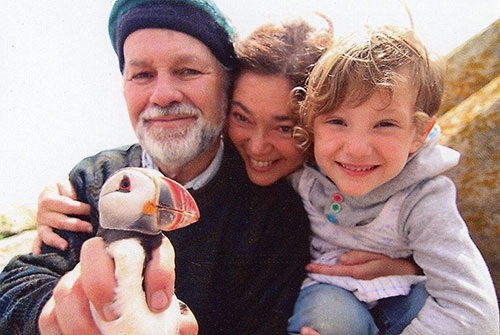 Steve with wife, daughter, and an Atlantic Puffin!

Amazingly, though, Steve has found ways to make sure his work hasn’t only been about training scientists. Steve has made ornithology accessible to the masses. Since the 1960s, he’s been a leader of National Audubon’s famed Hog Island nature camp, which has educated thousands of nature lovers over the years and has featured, in addition to himself, a who’s who of birding gurus, including Kenn Kaufman, Scott Weidensaul, and the “father of modern bird guides” himself, Roger Tory Peterson. Steve has written dozens of acclaimed books ranging from field guides to gardening for birds using native plants, and has taught ornithology to the general public for decades through the Lab of O’s Spring Field Ornithology (now apparently called something else, but it will always be “SFO” to us!). Because his work has been covered extensively by the media (newsprint, radio, TV, documentaries, you name it), Steve has reached millions of people with a positive message of how individuals can be part of the solution to the biodiversity crisis, and remind them that appreciating and caring for nature makes for a healthier life and society. 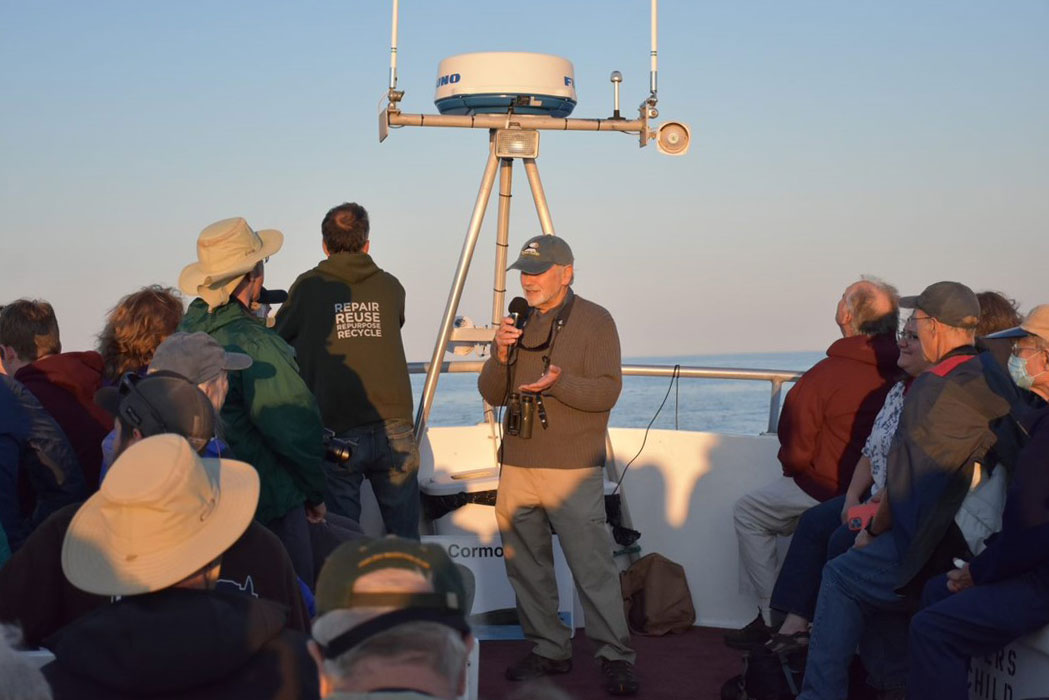 As you can imagine, all of this makes for a busy schedule of speaking engagements, and yet Steve has graciously partnered with NRCM for almost a decade on our annual puffin cruise, donating his time to share with our members the story of how Maine’s most famous summer residents were successfully reintroduced to our islands, how they disappeared in the first place, and why we all must pay attention and do what we can to protect our native wildlife. For all of these reasons and many more, we could not be more pleased that NRCM—Maine’s leading environmental advocacy organization—has recognized our dear friend Dr. Steve Kress with the 2022 Conservation Leadership Award for Lifetime Achievement. Congratulations, Steve!