There are many ways to spend time birding in the spring. As for us, we especially enjoy the surprises found by “pop-up pond” birding. To us, it has become a savored spring birding tradition. 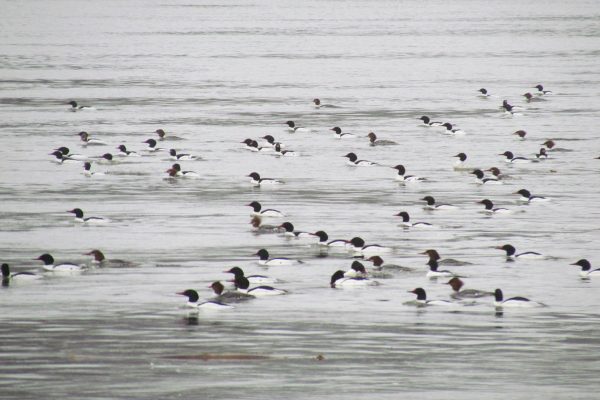 For the authors, spring is marked by the annual return of large flocks of Common Mergansers stopping over in the Kennebec on their migration north to their breeding grounds. (Photo by Jeff Wells)

Sure, springtime birding also means frequent visits to favorite ponds, lakes and rivers. The increasing ice out means an increasing chance of seeing birds arriving or migrating through to their wintering grounds. In fact, for us, spring has sprung when we see large flocks of Common Mergansers floating in the Kennebec River somewhere between South Gardiner and Richmond. In years past, we’ve seen hundreds of individuals in one loosely formed flock. It’s always a pleasure to stop to count them, but especially to hear the males’ harsh, staccato croaks as their irrepressible hormones send them jostling about for the attention of females.

We very much enjoy birding in those traditional spots. What makes “pop-up pond” birding so exciting for us, however, is not only the anticipation of which birds we might see, but whether the pond will even be there at all! 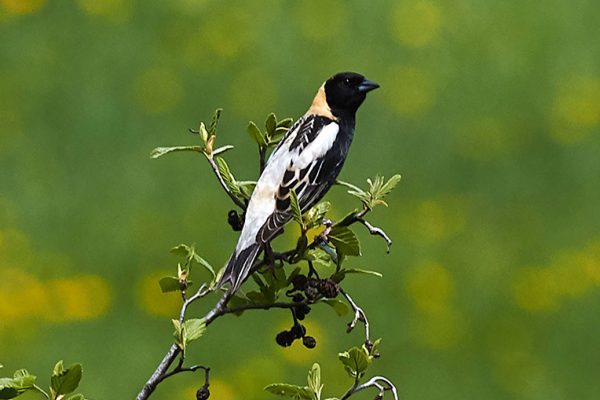 Bobolinks are among the species that are found in the authors’ favorite birding “patch.” (Photo by Pam Wells)

Our favorite pop-up pond is in an area of farm fields in Richmond where, in winter, we often see a Rough-legged Hawk and upwards of several dozen Bald Eagles of all ages feasting on a carcass out in the field. (We were surprised this year that an American Kestrel—a species that generally spends the winter south of Maine’s borders—opted to spend the winter here.) Later in the spring, our beloved “patch” (as we birders often refer to our regularly visited local birding spots) is a showcase for the sizzling songs of Savannah Sparrows and the bubbling voices of Bobolinks that breed here throughout the summer. 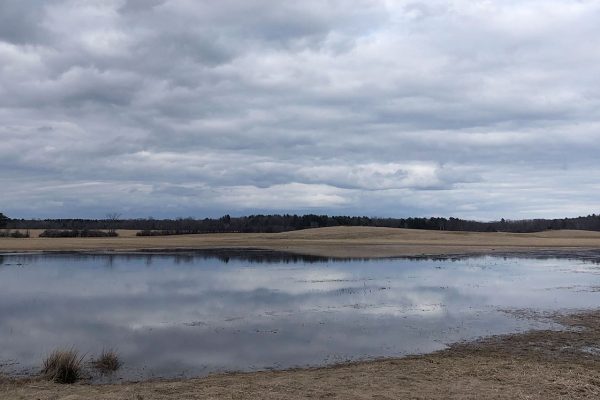 “Pop-up ponds” are created in early spring as a result of rains, spring melt, and ground thaw. Pictured here, a pop-up pond in Richmond. Photo courtesy of Allison Wells

This time of year, though, we love the excitement of checking out the shallow ephemeral wetland pond that forms in one low place in the vast field beside the road. After significant rains, the pond expands to make a rough circle of perhaps 200-300 yards in diameter. It is likely only about two feet deep at the center, and most of it is probably measures just inches in depth.

And depending on the spring melt, rain, and other conditions, it is often there today, gone tomorrow. And then back again, but who knows for how long? 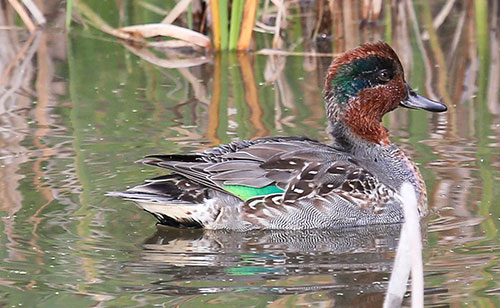 The gorgeous Green-winged Teal hung around a pop-up pond in Richmond for a few days before the pond shrunk back to a small pool. (Photo by David Small)

After a recent rain, we stopped by at this temporary extended puddle and there along the farther edge, with the ever-present Mallards, were seven handsome Wood Ducks, our second sighting of the year, having seen our first ones just 30 minutes earlier nearby in the Kennebec. On another day, our pop-up pond presented for our viewing pleasure two American Wigeon and nine resplendent Green-winged Teal. Two Killdeer were strolling along its edges as well. 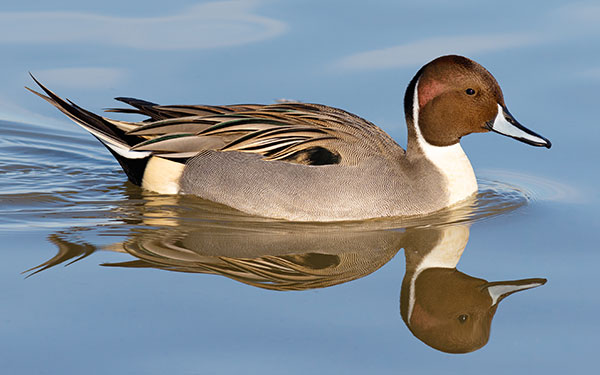 As you can tell, this little pop-up pond, when it’s there, can be amazingly productive for birds. Last spring, we saw a Bufflehead on it one day and a Northern Pintail another. In April last year, we saw Lesser and Greater Yellowlegs together in that same spot, with swarms of Tree Swallows and Barn Swallows zipping overhead.

It is only if you visit a place frequently that you may even know that a temporary pond can form there. These transient wetlands play an important role in the lives of birds that need a place to stop, rest, and feed in migration, even if only for a few hours. Members of the Natural Resources Council of Maine (NRCM) know well that vernal pools are vital places for breeding salamanders, frogs, and aquatic insects. Pop-up ponds and other kinds of appearing-out-of-nowhere wetlands are likewise important for migrating (and in some places, breeding) birds.

For birders like us who know where they form, pop-up ponds can also provide some of the most surprising and rewarding birding of the year!