During Earth Week, staff at the Natural Resources Council of Maine sent “digital care packages” to our members and supporters, as a way to help folks stay connected to nature. Jeff’s organization, National Audubon, has also upped their online engagement opportunities, as have a number of other groups. But many of us—perhaps you?—are creating our own “content” each day by simply walking out our front door. Insects are reappearing with the warming temperatures and spring peepers are peeping. Bird enthusiasts like us have been greatly anticipating these days and weeks, as each takes us deeper into spring bird migration and the beginning of nesting season, with its changes in bird behaviors.

The birds have not disappointed, as we mentioned during our recent NRCM birding webinar. Paying close attention to the changes in our backyard continues to yield some bird surprises. On social platforms, we’ve seen folks posting photos and videos of Barred Owls and Broad-winged Hawks, an American Woodcock on a nest, a color-banded American Kestrel (a small, migratory falcon) in West Gardiner, and a White-breasted Nuthatch gathering nesting material.

And that’s just a very tiny fraction of what people are noticing and sharing.

Here in our own yard, we have been hosting a Ruby-crowned Kinglet for the last week or so. Is it the same one, or different individuals passing through? We don’t know, but we are certainly enjoying this little bird (or birds) as it flits about in the lilac tree watching as we hang laundry on the line or try (in vain) to get a decent photo of it. Its bold white eye ring gives the bird a rather inquisitive expression; rarely with this particular bird or birds, we’ve even seen a trace of the ruby crown (which it typically flares when its excited). Occasionally, it graces us with its song. 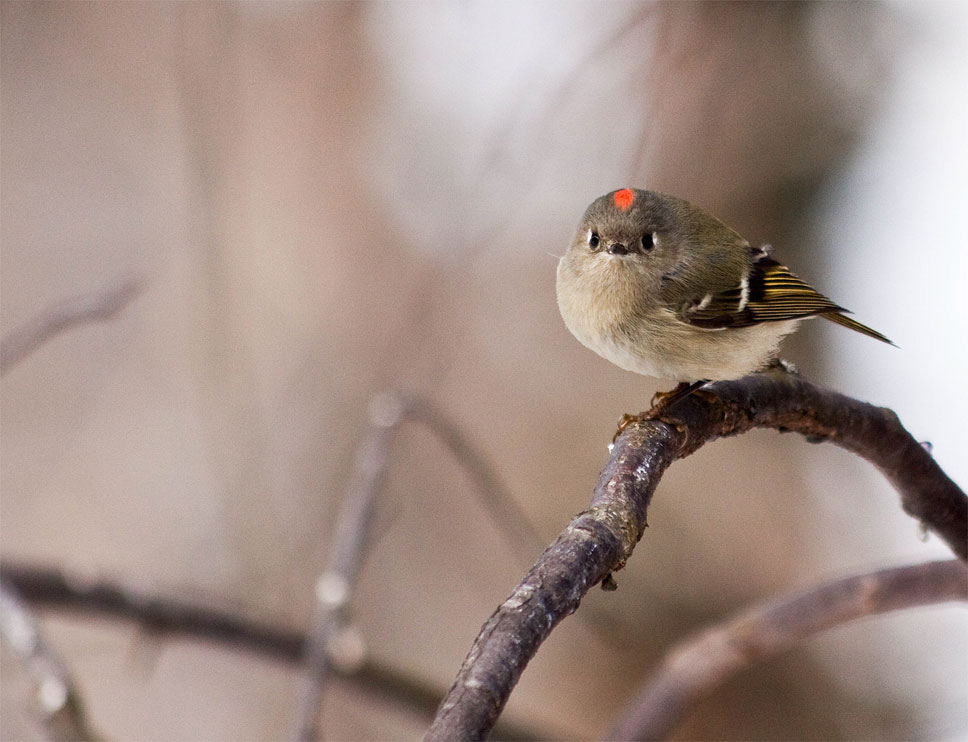 A Ruby-crowned Kinglet, a spring migrant, has been enjoying a lilac tree in the authors’ backyard. (Photo by Linda Pizer/Great Backyard Bird Count courtesy of National Audubon Society)

We did a double-take a few days ago when we looked out in a bush in our backyard and saw a Northern Mockingbird quietly sitting there—uncharacteristic of this typically rather flashy species. We hoped it was contemplating setting up housekeeping, as we’ve seen lots of mockingbirds around Maine over the years. In fact, just five miles or so away from our house, we see them quite regularly. But in the 15 years we’ve been at our present home, we’ve seen a mockingbird just twice before. Each time, the bird stuck around only for a day or two before it apparently found that our neighborhood just doesn’t have what it takes to convince a mockingbird to stay. Mockingbirds are thought to be essentially non-migratory. But does some portion of the population migrate south from northern latitudes and then return in the spring? Do some young birds just wander around in the spring looking for a new place to call home that isn’t already claimed by another mocker? We’ll let you know if we see it again here or find one somewhere in town. 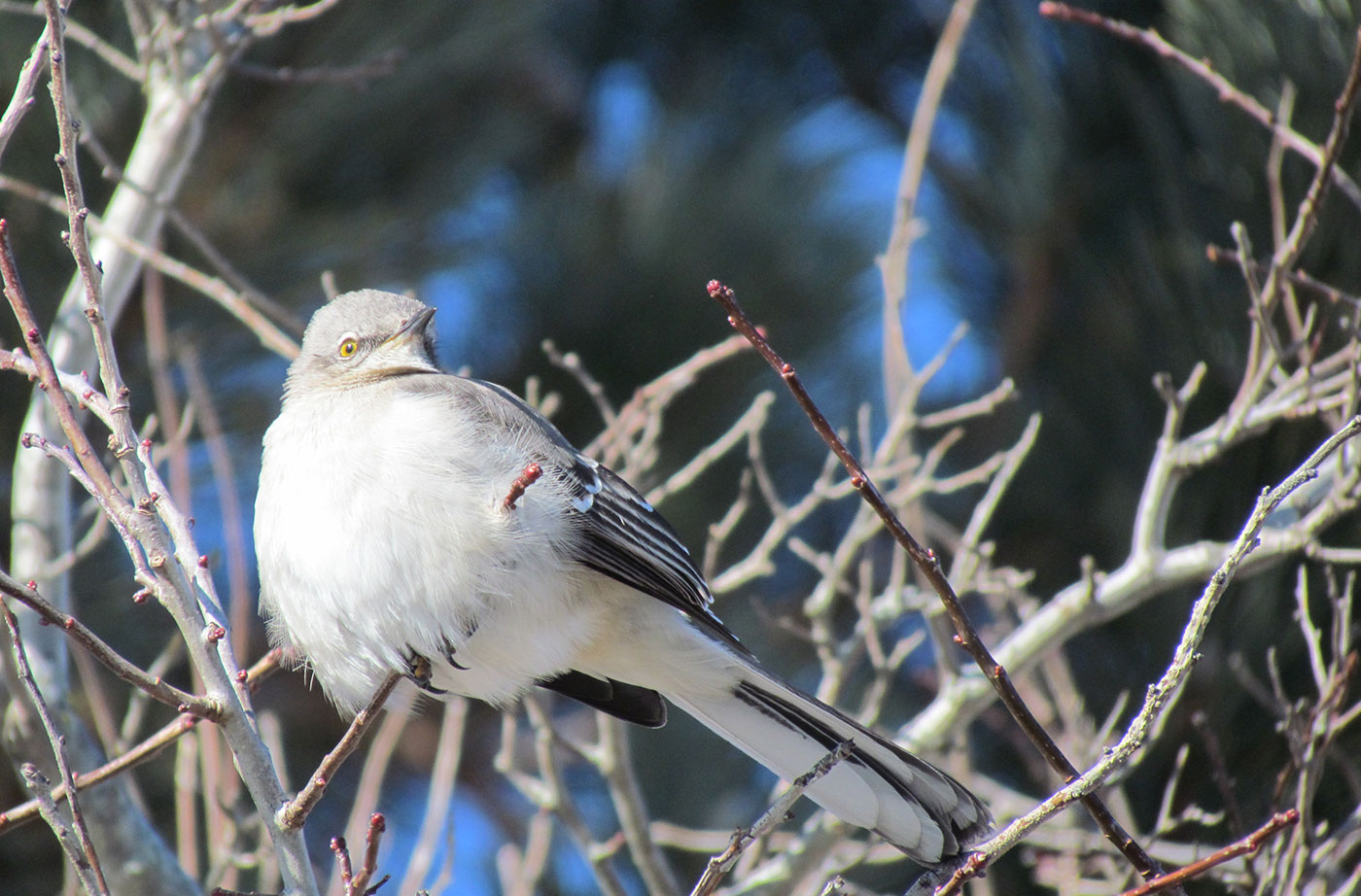 Northern Mockingbirds are thought to be essentially non-migratory. But the authors wonder, does some portion of the population migrate south from northern latitudes and then return in the spring? (Photo courtesy of Jeff Wells)

Another interesting observation we have had the past week is of a different sort. Like seemingly everywhere, crows are abundant in our neighborhood. We had noticed them starting to pick up sticks for nests some time ago; by now, presumably some may be laying or even incubating eggs. But just in the last week or so, while on our daily social-distance walks, we have noticed multiple crows from places quite distant from each other, giving unusual warbly rattle calls. We inquired with our friend and former Cornell Lab of Ornithology colleague Dr. Kevin McGowan, one of the world’s crow experts, as to what this strange vocalization might mean. He said it had something to do with what he called “intra-family bond maintenance,” since crows maintain bonds between parents and older offspring in sometimes complicated ways. 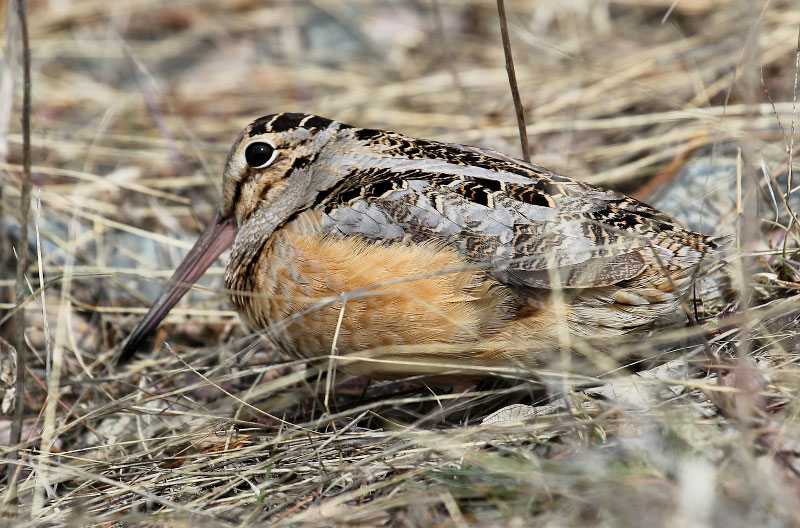 The authors discovered a displaying male American Woodcock during a recent social-distance walk and hope the bird finds a mate and will nest in their neighborhood. (Photo by Dave Small)

A few evenings ago, we walked a little farther than usual and just as it was getting dark, we discovered the wonderful high-pitched twittering of a male American woodcock high in the air doing his mating dance. It seemed a surprising place for such a display until later, when we came upon a patch of field sandwiched between a cemetery and the houses along the road, where he could be heard giving his nasal “peent” call from the ground. We hope this means he has found a suitable spot where he can attract a female who will be able to find a place nearby to hide her ground-nest and raise her chicks.

We hope all of you are making lots of discoveries close to home, too!