Insider Secrets of Some of Maine’s Favorite Birds

Birds nonchalantly drop clues into the mysteries of their lives as they go about their business of flitting in the treetops, skulking in the underbrush, diving for fish and other water critters to eat, gorging at our bird feeders, migrating, breeding, feeding young, and so forth. The revelations they provide can give us reason to pause, or at least slow, our busy lives and enjoy the curiosity they inspire. 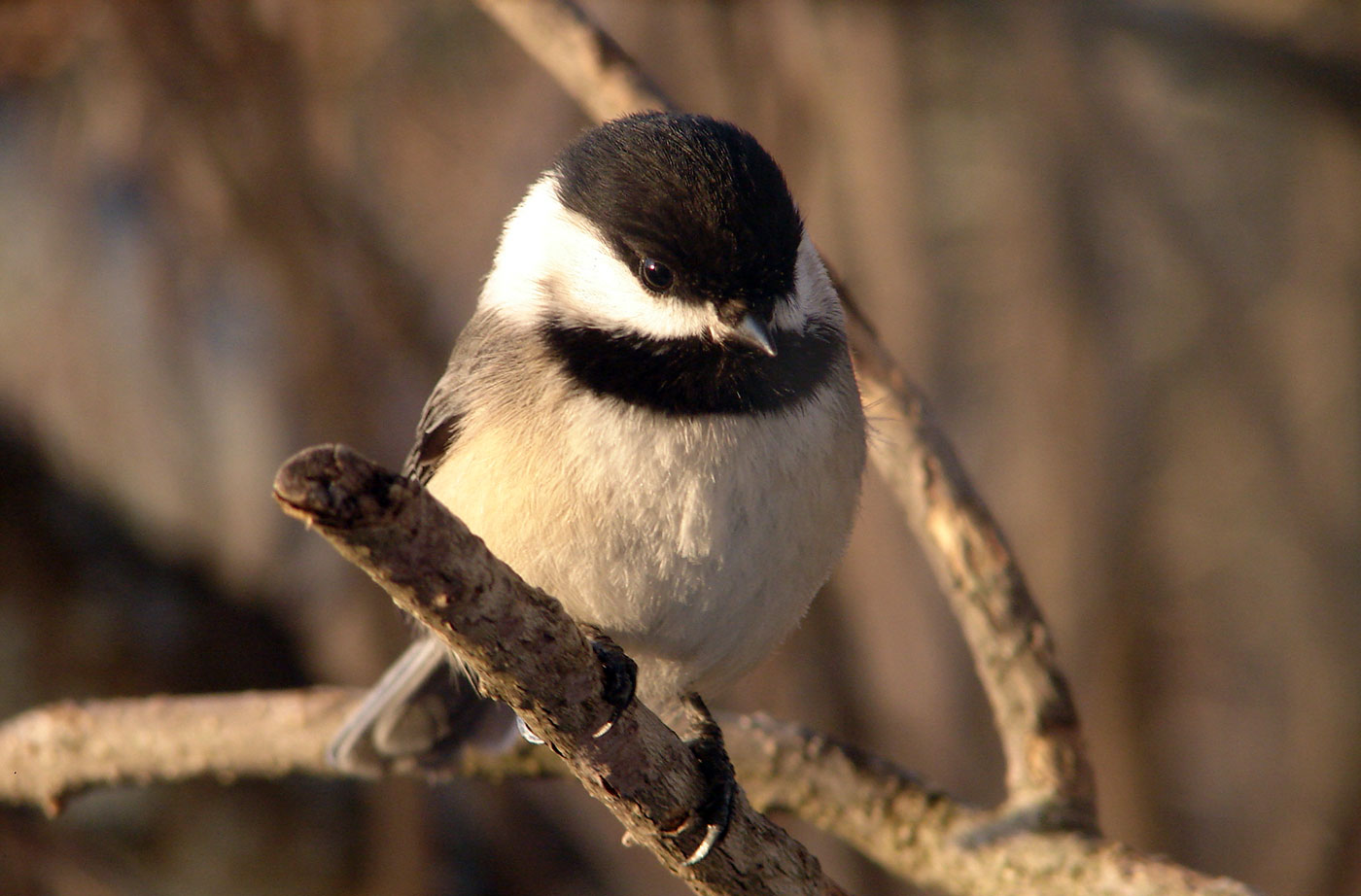 Although it may seem like you’re seeing the same chickadees over and over, studies show that most yards host too many individual chickadees to keep track of. (Photo courtesy of Beth Comeau)

What isn’t a surprise is that Black-capped Chickadees make an impression wherever they occur. Certainly, these charismatic creatures are a favorite here in Maine, evidenced by the fact that the chickadee is our state bird (even if our legislators continue to opt for ambiguity as to whether it’s the black-capped or the boreal chickadee!) and rides along both in front AND behind us on Maine’s standard license plate. We see Black-capped Chickadees year-round in our backyards, parks, and forests. You wouldn’t be alone if you assumed you’re seeing the same birds over and over. But here’s a secret: Some of the individuals we see in winter are actually migrants from farther north that join residents that stay put. Studies of chickadees banded at backyard feeders have found that there are usually three or four times as many individuals coming to our backyard feeders as we can count at any one time. Who’d have guessed? 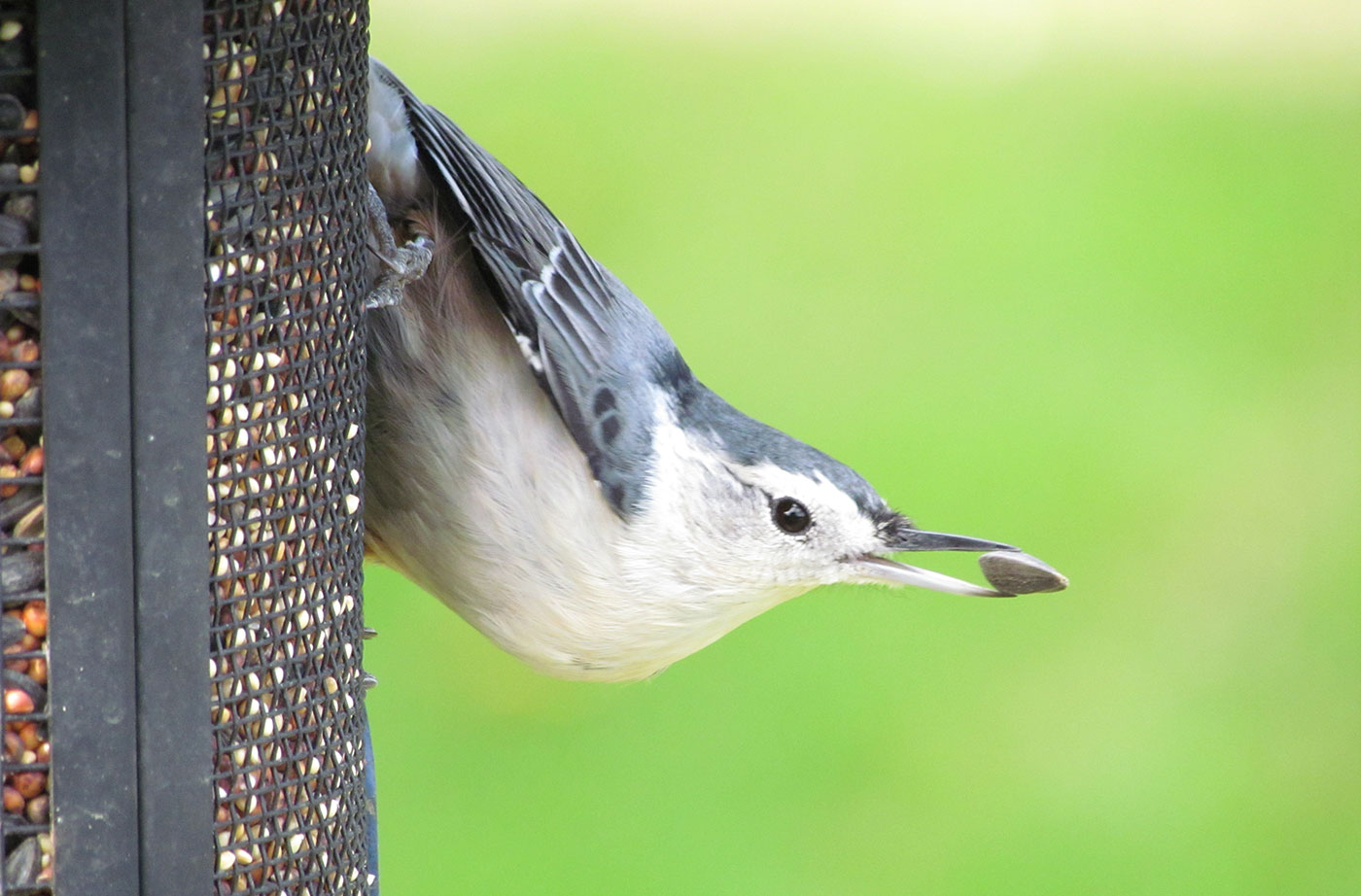 Despite that old Blood, Sweat, & Tears song lyric, “what goes up must come down,” nuthatches are the only birds in our area that walk both up AND down the trunks of trees. (White-breasted Nuthatch photo courtesy of Tina Richards)

Nuthatches, too—both the larger white-breasted and the smaller red-breasted—are familiar and favorite backyard birds here in Maine and throughout the Northeast with secrets to reveal. Did you know nuthatches are said to be the only birds in our area that regularly walk both up AND down the trunks of trees? Despite what they may try to get you to think, chickadees don’t really walk up and down tree trunks at all. Sorry, Blood, Sweat, & Tears, but “what goes up must come down” doesn’t apply to those clever woodpeckers and Brown Creepers, either: They go up a tree trunk, but never down—at least, not face down, anyway. 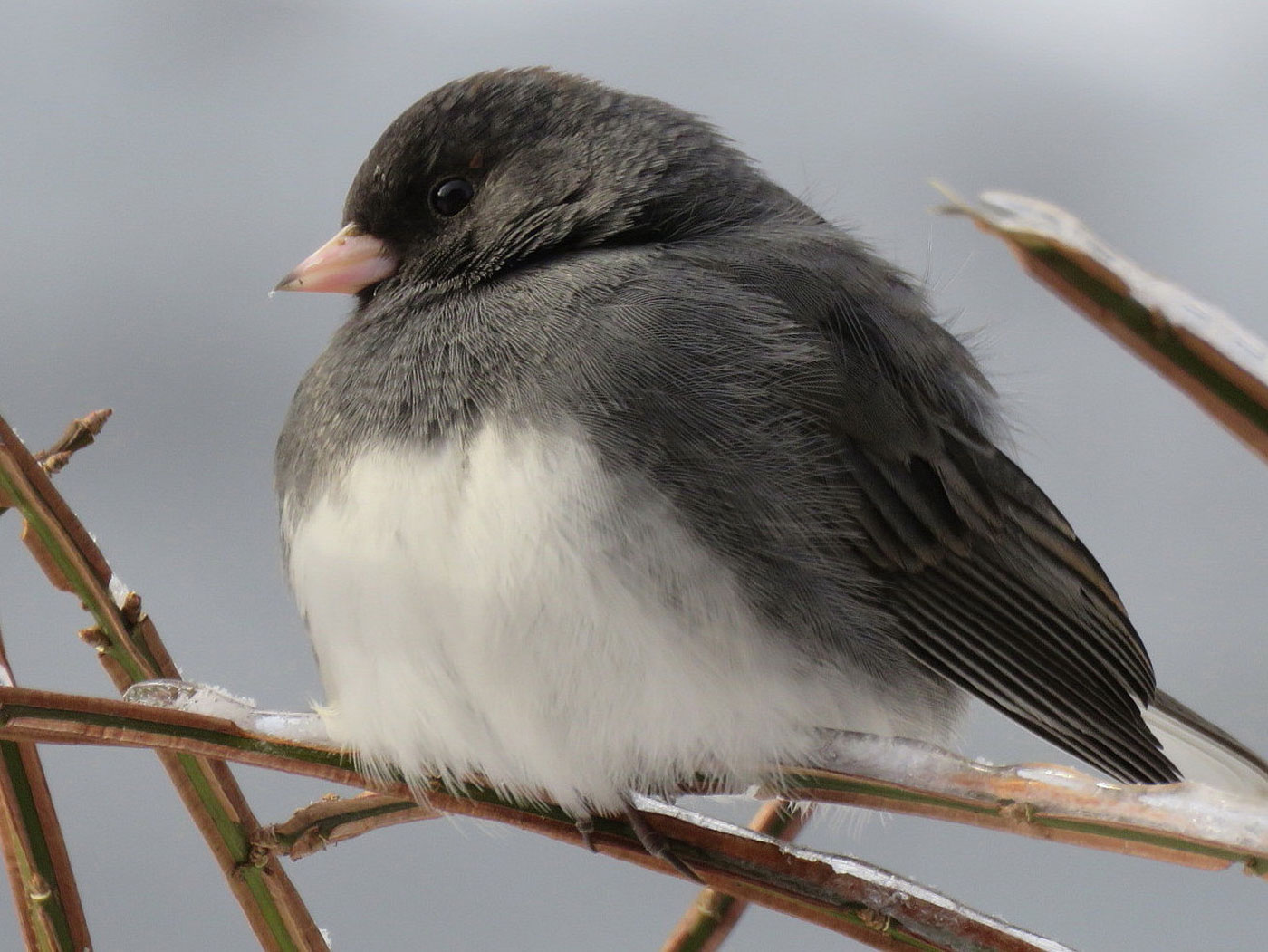 The white on the edge of a Dark-eyed Junco’s tail serves a real, possibly life-saving purpose. (Courtesy of Jayne Winters)

Dark-eyed Juncos have begun arriving in numbers across Maine as many migrate south from their boreal Canadian breeding grounds where the largest proportion of the nesting population occurs each summer (yes, they also nest in Maine). You may already be seeing flocks of the striking gray-and-white birds flush up from the roadside as you pass by in your car. Even those of you who aren’t bird nerds like us probably notice the flash of white on the sides of the tails as they take flight. Here’s some insider gossip about that attention-grabbing trait: It’s thought to give the little birds an advantage when pursued by a hawk or mammal for whom they are a take-out meal. Word has it, the predator may focus its claws or talons on the white-sided tail, missing the body of the bird and instead dislodging a feather rather than causing lethal bodily injury. 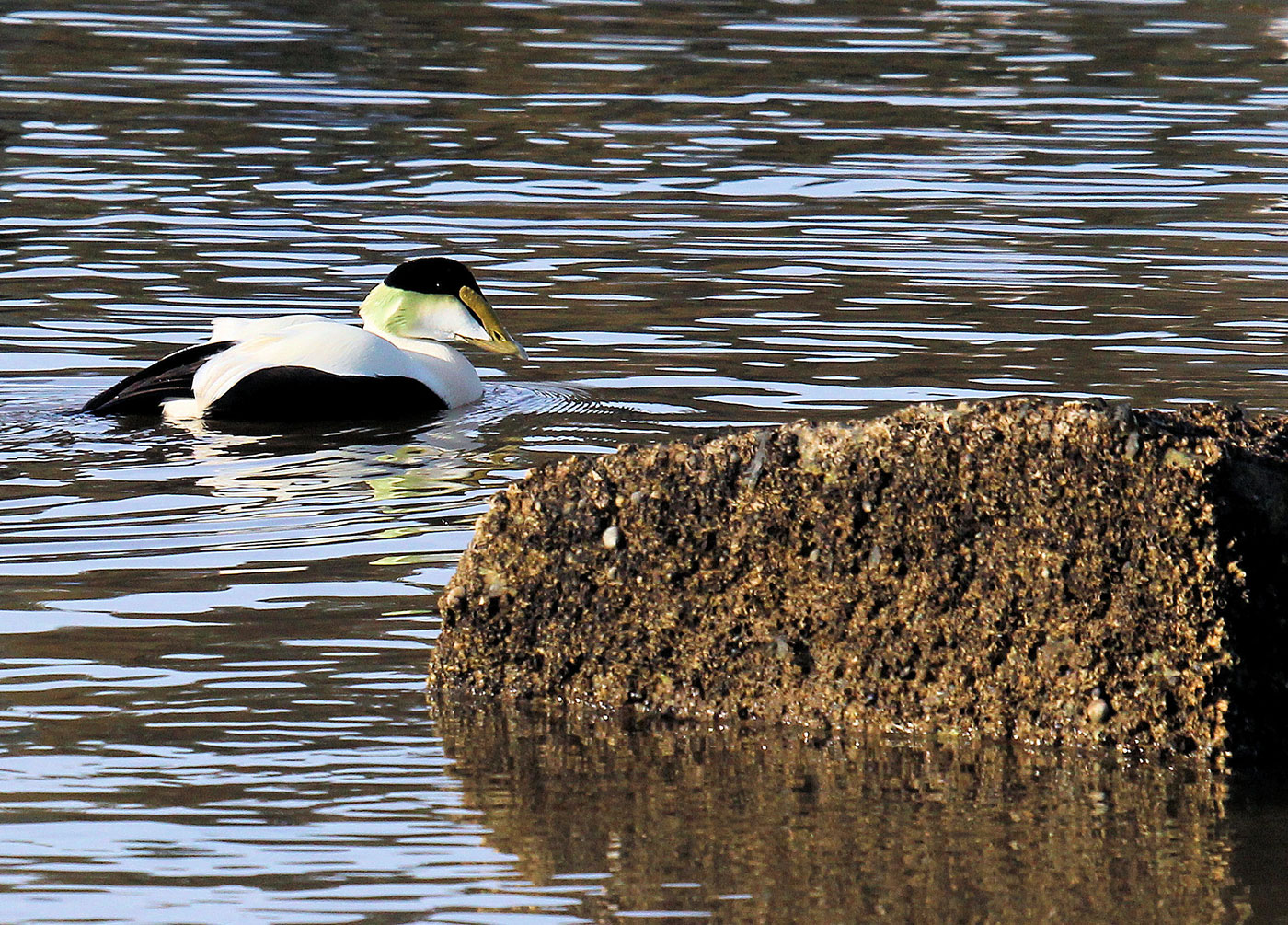 Along the ocean shores, flocks of Common Eiders are settling in for the winter, some having spent the summer and others having migrated south from Canada. Bobbing in the waves, the males sharply dressed in black and white, the females in russet browns, they seem unperturbed by the coldest winds. Often, you’ll see a Herring Gull hanging around the cliquey cluster.

Because they’re pirates! They wait for an unsuspecting eider to surface with a mussel or crab it has just captured in the icy depths. Quickly, the sharp-eyed gull will arise and snatch the delicious morsel for itself before the eider even knows what has happened. Kinda like what happens to many a tourist naively holding a lobster roll on the wharf behind the snack shack. It’s enough to make you say, “Arrrrrr, shiver me timbers!”

Ah, but this little surprise may have yet another turn: A Bald Eagle sitting nearby at the top of a dark spruce watching this scene unfold may swoop down and scare the gull into dropping the food. Despite their glamour and regality as the symbol of our great country, one of the best places to see and observe Bald Eagles is at…dumps. It’s true. But rather than pilfer through the filth, they often sit on the edges, letting the gulls do the dirty work of digging around in the refuse to find food and then quickly giving chase when a gull appears with some piece of hunger-satisfying garbage. Out of fear of the pursuit by the massive predator coming at them, the gulls typically drop the food, which the eagle promptly picks up and eats.

Hopefully, it’s no secret to you that the Natural Resources Council of Maine’s work protecting our state’s environment provides tremendous benefit to all of these birds and more. Thank you for supporting NRCM’s efforts protecting the nature of Maine.

With the holidays approaching, consider purchasing a copy of Jeff and Allison’s book, Maine’s Favorite Birds (Tilbury House Publishers). If you’d like it signed, get your copy at L.L. Bean in Freeport from 5:00-9:00 p.m. on Wednesday, December 11 for the Northern Lights Author Event—Jeff and Allison will be there, and they invite you to bring stories about your favorite birds!