If you love Maine’s wildlife and haven’t yet been to the Katahdin Woods & Waters National Monument (KWW), we really encourage you to go. The reasons are countless. It’s located in the heart of Maine’s beautiful North Woods, for one, with the majestic peak of Katahdin in view just about everywhere, it seems. For another, the 87,000 acres include beautiful lands and waters to explore. And the Monument is the culmination of the Natural Resources Council of Maine’s undying efforts, working alongside people in the region, to move this massive conservation project from a dream to reality. But being birders and wildlife enthusiasts, we’ve narrowed it down to five of our favorites.

1. You Can See a Lot of Really Cool Birds. There are tons of them at KWW, including many species bird enthusiasts travel far and wide to see. These “northern Maine specialties” include the likes of Canada Jays, Boreal Chickadees, Spruce Grouse, Black-backed Woodpeckers, Rusty Blackbirds, Olive-sided Flycatchers, Yellow-bellied Flycatchers, Cape May Warblers, Bay-breasted Warblers, Palm Warblers, Lincoln’s Sparrows—they all call the Monument home. 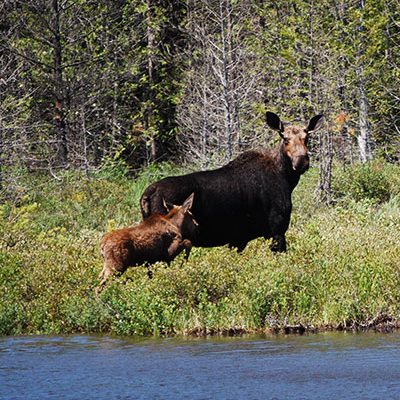 2. You Can Hear Lots of Cool Birds. During our visits to the Monument, one of our favorite activities was to just stand in one place and listen to the wide range of incredible bird songs. We knew we would return to these recordings again and again, to be reminded of the incredible biodiversity within the Monument's boundaries. Listen to a recording we made that features the musical thrills and trills of one of KWW’s most gifted singers, the Winter Wren. This one captures the voice of the Blue-headed Vireo, among others.

3. You Can See Bears. While scouting for a birding trip we would be leading for NRCM in June of 2014—before the lands were declared a National Monument—we came around a corner on the Loop Road just as a black bear sauntered out of some brush. It wandered along the road in easy view, easy enough for us to get this video. This remains one of our favorite Monument memories. By the way, you also have a pretty good chance of seeing another of Maine’s charismatic megafauna, moose! 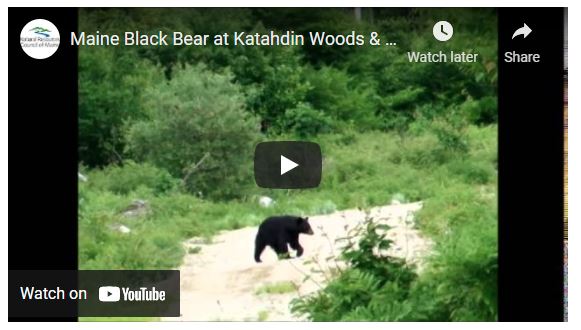 4. Habitat, Habitat, Habitat. As if the birds and mammals weren’t spectacular enough, there’s the habitat that provides them—along with snakes, amphibians, fish, insects, and other creatures—a home. The Monument is a quilt of mountains, bogs, ponds, streams, and rivers, nestled up against the eastern side of another of Maine’s most beloved treasures—Baxter State Park.

5. It’s the Monument’s Fifth Anniversary. What does this have to do with birds and wildlife? Everything! The day—August 24, 2016—when KWW was signed into being gave hope to those of us who care about the nature of Maine, and birds and wildlife everywhere. Scientists more and more are coming to realize that a modern global conservation goal should be to ensure that at least 30% of lands and waters are protected by 2030—the so-called “30 by 30 initiative.” Maine’s North Woods represents the largest unbroken tract of land east of the Mississippi. Katahdin Woods & Waters National Monument and Baxter State Park play important roles in ensuring the long-term future of birds and wildlife. Given the recent news about the decline of birds by nearly 3 billion over the last 40 years, lands like these provide hope that future generations will be able to see and enjoy the wildlife we all love.

As we write, scores of migrating songbirds are passing through the forests and wetlands of Katahdin Woods & Waters National Monument on their long journeys south from points north. In the Monument, they are finding food, water, and safe resting places that will give them a better chance of fattening up to make flights that may take them as far south as the Caribbean, or to Central America or South America.

May these migrating birds be a reminder: If you haven’t made your own “migration” to Katahdin Woods & Waters National Monument, we strongly encourage you to make your plans today!