Evening Grosbeaks are on the Move 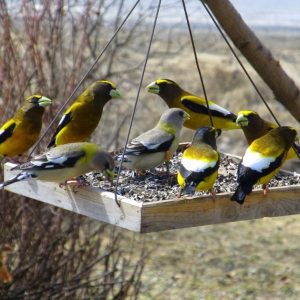 Back in the 1970s, bird-feeding enthusiasts everywhere seemed to talk about buying a hundred pounds of sunflower seed every few weeks to feed Evening Grosbeak flocks of fifty or hundred, or even more, that arrived daily to their backyard feeders in the winter. The species has since declined by 92%. (photo courtesy of Bill Sheehan)

When we think of Evening Grosbeaks, we remember the hordes of them gorging themselves at the double-decker platform feeder at a former family home in Winthrop. We’d watch from the large living room window as the plump golden, black, and white orbs chomped through gobs of sunflower seeds with their enormous bills. Sometimes the flocks were so plentiful that we spread seed several times a day, as the birds apparently knew they had discovered a treasure trove.

We weren’t the only ones enjoying bounty of Evening Grosbeak house guests. Back in the 1970s, bird-feeding enthusiasts everywhere seemed to talk about buying a hundred pounds of sunflower seed every few weeks to feed flocks of fifty or hundred, or even more, that arrived daily to their backyard feeders in the winter.

And then they were gone…

This year a southward irruptive movement of Evening Grosbeaks is being documented across much of the U.S. (photo by David Small)

Now, we birders consider ourselves lucky when we see even a couple of them at a feeder or hear some flying overhead once or twice a season. Sure, there are some places up north where people are graced with small flocks in the winter, and the species does breed in a few locations in northern Maine. But since the 70s, Evening Grosbeak populations have declined by 92%. Researchers have yet to determine the reasons for this population crash, but it’s no wonder observations of Evening Grosbeaks are scant these days. We remember one year circling around the vicinity of the State House, where a few had been reported—and hoping they might make an appearance at the Natural Resources Council of Maine—but to no avail.

So we’ve been excited to see that this year, there’s already been a southward irruptive movement of Evening Grosbeaks documented across much of the U.S. Through eBird, we can see that birders as far south as the Outer Banks of North Carolina as well as in Virginia, Kentucky, southern Illinois, and southern Missouri documented Evening Grosbeaks in October and into November. Evening Grosbeaks have also been found at one the country’s birding meccas—Cape May, New Jersey—and around Washington, D.C., over the last few weeks.

Here in Maine, there have been many reports of Evening Grosbeaks. Some were seen at feeders where lucky birders have had the chance to photograph them. Others have been flying high overhead, faintly heard as they passed south. We’ve count ourselves fortunate to have recently heard a couple flying over high above in the last week in our neighborhood while walking our dog. We quickly refilled our feeders, with the hope that they would accept our welcoming gesture. So far, no luck, but we are still hoping one or more may stop off where we can see them. 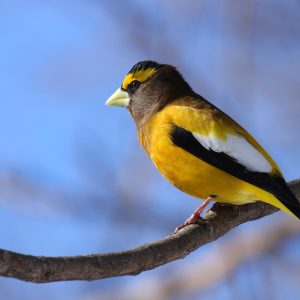 The authors heard several Evening Grosbeaks in their neighborhood while walking their dog, but have yet to see this distinctively beautiful bird this year. (Courtesy photo)

It’s always hard to say with irruptive finches like Evening Grosbeaks whether there will be an initial early season movement across the area that then dribbles down to a very few that stay longer or for the winter. Sometimes these so-called “irruptions” burst through early but the species aren’t seen again (or there are only a few at certain lucky feeders).

As consolation, we have been enjoying watching House Finches, a few Purple Finches, and even a few Dark-eyed Juncos feeding on the seeds of a towering white ash tree on our neighbor’s property. We keep hoping this natural food source that is so attractive to these birds might attract some hungry Evening Grosbeaks as well. Interestingly, something that we have found very curious is that several other white ash trees in our neighborhood are also heavily laden with seeds like this one that has been so popular with the birds. Yet we never see any birds feeding in these other trees. Do some trees of the same species produce tastier or more nutritious seeds? What role does location play when birds choose one tree over others that are the same and are in close proximity? Could it be that maybe our timing is just off, that they do feed in those trees, but not when we happen to be looking? It remains a mystery to us.

We hope some of you may have the good fortune of hosting Evening Grosbeaks this winter. Keep your eyes open for these special birds—you won’t want to miss them.